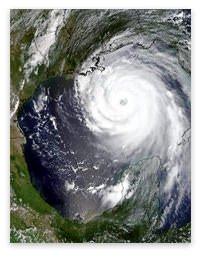 Now that the furor over the botched response to Hurricane Katrina has largely subsided, we can calmly examine an aspect of the episode that most commentators have neglected. Let me motivate the examination by first making the (perhaps surprising) claim that I don't think the FEMA bureaucrats did anything particularly outrageous. Yes, it is true that the main damage to New Orleans was caused not by the hurricane per se, but by the government's poorly designed levee system. It is also true that, given the flooding, the federal presence only made matters worse. FEMA officials almost seemed to purposely sabotage relief efforts, by blocking private shipments of aid, detouring volunteer firefighters to Atlanta for two days to receive sexual harassment training, and even telling "First Responders" to wait before responding! And of course, the escalating threats against "price gouging" only further stanched the flow of vital supplies into the ravaged region.

In response to this less than helpful federal activity, many citizens accused President Bush of racism. Although I agree that Bush (like any politician) would have been more attentive to the needs of rich donors who supported his party, I'm not sure that overt racism is the explanation. As William Anderson observed, FEMA's response to the disaster was the epitome of government behavior: the State's primary objective is always to establish its own control, and then as an afterthought it may deign to help people (albeit in a bureaucratic and counterproductive fashion). To understand how reasonably well-intentioned government employees could have made the horrible decisions outlined above, let's consider the situation they faced.

The FEMA officials were "in charge" of relief efforts for the ravaged areas. As news reports of the disaster alerted the nation to its severity, thousands upon thousands of people and agencies offered help. In that scenario, what were the overwhelmed officials supposed to do? They obviously didn't have a fully specified (let alone useful!) contingency plan to which they could refer; since they had no idea where, say, 500 bottles of water should be delivered, is it so surprising that they so often said, "Thanks for the offer, but hold off on shipping it here until we get back to you"?

The full complexity of the problem becomes apparent when we consider that some offers should have been refused. For example, suppose a group of well-meaning college age women wanted to go door to door handing out batteries in a neighborhood that was teeming with looters, sewer water, and downed power lines. Depending on the specifics, it is entirely possible that the "right" thing (and for the moment we'll have to be vague about the criteria of goodness here) would be to politely refuse their offer. This is because the cost in resources needed to escort them or give aid to them if they became sick, would likely exceed the benefits of getting batteries to the few residents still in the flooded area.

Those familiar with Austrian economics will immediately recognize the similarity between FEMA's woes and those of a central economic planner. As Ludwig von Mises famously demonstrated, socialist economy is simply impossible. Beyond the incentive problems, there is a much more fundamental calculation problem: without private ownership of the "means of production," there are no meaningful prices for capital goods and raw materials. Therefore, the socialist planners cannot use the profit and loss test to decide if a particular enterprise uses up "too much" of the scarce resources in comparison to the benefits people get from the goods and services the enterprise yields.

However, it is too glibi to simply say "calculation problem" when considering FEMA, and then move on to other examples of government folly. In the typical exposition, the reason the private entrepreneur is not himself plagued by a calculation problem is that his customers' expenditures give him the ability to bid away the necessary resources from other entrepreneurs. If the good or service he makes cannot fetch enough revenues from customers to "cover costs," then that's the market's way of saying, "The resources you want to use in your line are more urgently demanded elsewhere, according to the preferences of the consumers. Therefore you go out of business."

But how does this work in the case of disaster relief? Is the laissez-faire economist really advocating the Dickensian caricature of companies selling bottles of water and first aid kits to the highest bidder?

No they are not, and this is a point often overlooked even by pro-market writers. Despite the clichés to the contrary, the market does not allocate goods to those who are willing to pay the most for them. On the contrary, in a free market goods are "allocated" to whatever use the owners decide.

In many cases, the owners will indeed not care for the identity of the prospective buyer or the uses to which they will put the goods in question, and will truly sell to whichever party offers the most. However, there are many cases where this rule doesn't hold. When parents maintain a college-bound child's room for Thanksgiving visits etc., they are not maximizing revenue. They are deciding to forego renting the room to a much higher bidder, and instead are giving it for free to their child.

To pick a more "economic" example, it is not true that laborers always sell their services to the highest bidder. Someone may give up the stressful (yet highly paid) life of corporate law and opt to be a librarian.

As these examples illustrate, the function of market prices is not to dictate how resources are deployed, but rather to let the owners make an informed decision. If there is a tremendous housing shortage, then the rising rental rates will let the parents know just how much someone else would like to use their child's room. And the best trial lawyer in the world will probably not end up as a librarian, because of the outrageous salary he or she would be turning down. Again, the market price of his or her services signals how much others value them.

After Katrina, plenty of individuals (including shareholders acting through corporations) were willing to donate their property (including labor services) to help the victims. Naturally they weren't looking to make a buck, but market prices were still essential to coordinating relief efforts. This is most obviously true when one considers all of the tremendous coordination that the market achieves on a day to day basis during times of normalcy: All of the crude oil that is sent to refineries and ultimately finds its way into everyone's vehicle, all of the truckers who deliver products to various retail stores before spoiling, all of the clerks who show up at work in order to facilitate the purchase of these goods…

In a truly free market, private relief agencies would still exist. They would solicit donations and use the funds to help in ways they deemed most important. The crucial difference between private organizations and FEMA, however, is that the former would have to engage in voluntary activities. In particular, they couldn't prevent others from trying rival strategies for assisting the victims. Thus, although individuals would still make mistakes (everyone is fallible), the overall relief effort would be far more effective, because competing agencies would quickly make such mistakes obvious.

As in all other areas, the free market is superior to monopoly governments when it comes to disaster relief. Once we recognize that it is not prices per se but rather private property (with its associated voluntary exchanges) that undergirds the commercial success of the market, it is easy to see how private relief efforts could have helped Katrina victims far more than FEMA did.