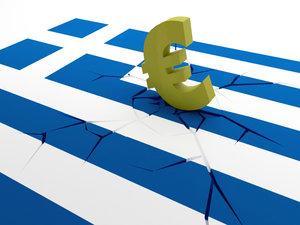 Greece is back in the headlines. This should surprise no one. It was naïve to think that Greeks would accept being debt slaves forever.

Despite all the rumblings that Greece will be forced to leave the Euro, there is in reality no mechanism by which EU countries can force a Eurozone member to exit the currency union. It really is all a bluff. This is a standard scare tactic used by governments to induce people to give up freedom for a little security.

Greece currently owes a little over 300 billion euros to various creditors. About 200 billion is owed to the Eurozone institutions, the European Financial Stability Facility (EFSF), and the European Stability Mechanism (ESM), that raised funds based on Eurozone guarantees. The remainder is owed to the IMF, ECB, and private creditors. If Greece were to default, it would probably be mostly on the debts owed to Eurozone members. To get Greece down to a manageable debt level, a default of at least 150 billion euros is necessary.

Of course, such a default would mean that the guarantees would then kick in. Government officials in Europe are currently in panic mode since this would likely be another Lehman moment. Spain, Italy, and France have guaranteed about 50 percent of this debt. A default would mean an important increase in the debt load of each of these countries. This would likely be the tipping point for Italy which has a current debt to GDP level of over 130 percent and several decades of essentially no growth. Italy is too big to bail out. Bail-ins and ensuing bank runs would then become an increasing possibility. The ECB would probably step in to essentially monetize the debt of these spendthrift countries. The pressure on Germany to leave the euro would then be overwhelming.

Greece is actually in the driver’s seat. It is currently running a primary surplus. Historical evidence shows that once a country reaches such a situation it is likely to default within the next two years. In 1947, Time Magazine attributed the following quotation to Keynes, “If you owe the bank thousands, then you have a problem. If you owe the bank millions, then the bank has a problem.” In the current situation, it is the EU that has a problem.

Germany has threatened to hold back further funding if Greece reverses or halts current reforms. This is also a bluff. If there is one thing we have learned from European governments is that they have no backbone and will always take the easy solution to kick the can down the road. Greece will likely get more money from the EU to pay interest and principal, on the promise of token reforms. Of course, this violates one of the most important lessons in finance. Don’t throw good money after bad. In Europe, we are constantly putting short-term bandages on a terminally ill patient. The crisis will be postponed, only to be worse down the road. You simply cannot solve a debt problem with more debt.

The Illusion of Austerity

It is irrational to believe that growth will pick up when you guide your economy in the direction of communist Cuba instead of Singapore. Mario Draghi talks about reform such as making labor laws more flexible. This would be funny if he was not serious. The real problem is a century of socialist meddling in everything: getting progressively worse since the 1960s. You cannot fix the system; you have to tear it down starting at the foundations.

From 2003 to 2013, France has experienced constant “legislative inflation” (video) Take for example land use laws in France. Since the 80s and 90s environmentalists have, with the aid of EU institutions, erected a mountain of regulations. The use of land has to fit into a government urban plan, satisfy a mountain of restrictions such as coastal laws, wet land law, biodiversity laws, and natural zones preservation laws. Land for construction near even minor cities can be 1,000 times more expensive than agricultural land. These higher prices and a myriad of other impediments have brought private construction in France to a standstill.

“A democracy is two wolves and a lamb voting for what to have for lunch.”  With Government spending in many European countries well over 50% of GDP, a majority of people work for the government or depend on the government for their livelihood. Over half of the borrowing that got Greece into trouble was for vote getting increases in public sector wages. Yet, even today public sector wages in Greece have barely bugged. If the Greek Party Syriza wins the upcoming election it has pledge to reverse the minor cuts in public sector employment already implemented.

Socialism for the Rich

Europe saved Greece to bail out its bankers. Without the bailout, Greece would have defaulted and returned to the drachma. It would have been forced to drastically slash government salaries and payrolls. It would have had to cut the wage increases that got it into debt trouble in the first place. Instead, the bankers walked away, with private debt replaced by public debt. Now, Greece could sink all of Europe, with the European taxpayer and citizen unaware of the hardship he will shortly endure: all of this to transfer wealth from the have-nots to the haves.

Unfortunately, the economic platform of the left-leaning Syriza will make the economic situation much worse. You cannot repeal the law of scarcity. The same is true of the economic platforms of Podemos in Spain and the National Front in France. Hold on to your hats since we are in for a turbulent future in Europe. It did not have to be this way.