How to Conquer Poverty 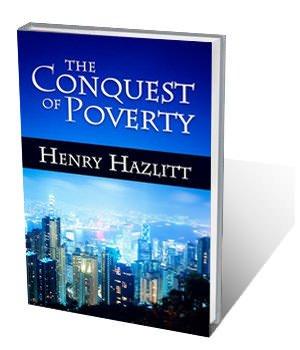 "The free-swinging enterpriser, using capitalist savings, is the true hero of the war on poverty."

The message of Henry Hazlitt's The Conquest of Poverty is that his subject could have been dealt with in the past tense if it weren't for the pernicious doctrine that "the state knows best."

Alas! the tendency to hand problems of income "distribution" over to politicians whose only real skill is the accumulation of votes has prevented the West from utilizing the great productive strength that is to be found in the principle of voluntary association. So the cure for poverty is still in the future.

Just how far are we from getting government off our backs? Mr. Hazlitt is not a total pessimist; he believes in the power of education. Mere verbal demonstration, however, is not an infallible schoolteacher; the collaboration of events is needed to make education effective.

Fortunately, events are coming to Mr. Hazlitt's aid; what he was saying twenty years ago about the fallacies of statism is becoming hindsight as it is repeated by other and less prescient men who now stand appalled at what inflation, a government created phenomenon, is doing to compound our troubles.

Since poverty is a relative thing (some people are always going to be poorer than others), Mr. HazIitt has had his difficulties with the conventional definitions. Value judgments are involved. It is wrong to define poverty, as one "authority" does, as the condition affecting "any family with an income less than one-half that of the median family." If such a definition were to be accepted it would mean that the percentage of the poor would never decrease until all incomes were equalized. The bottom fourth of a nation might be sufficiently fed to remain healthy and still be candidates for soaring relief if any such definition were to be perpetuated.

What Mr. Hazlitt proposes is that the "subsistence level" must provide our working definition of the poverty line. Any attempt to provide relief for able bodied adults beyond subsistence must take money away from production and so render society poorer on the whole.

Capitalism, in league with technological ingenuity, is what delivered the West from the specter of Malthusian doom. Before the industrial revolution, soaring populations pressed inexorably on the means of subsistence. But when the Manchester factories in England began to soak up the idled poor from the countryside and make the importation of cheap wheat a possibility, Malthus was discredited as a prophet for his own Britain. As things turned out, the ingenuity that capitalism unleashed was reflected in the birth statistics: middle class people who did not need big families in order to provide themselves with field hands found ways of limiting their children.

The combination of smaller families and a more skillful application of science to agriculture itself ended the problem of famine in the West. We were on our way toward limiting poverty to the chronically incapacitated without saddling the productive system with high taxes and the inefficiency that always follows from government interference or takeover.

Combing through the records of antiquity, Mr. Hazlitt notes what "the New Deal in Old Rome" did to enervate our first great universal empire. Between state supported slavery, high taxes, the multiplying relief of "bread and circuses," and the final imposition of price controls, Roman productive efficiency simply vanished.

In Britain, there was a saving realism about the original application of the "poor laws." But in 1795 the Berkshire magistrates, meeting at Speenhamland, decided to supplement wages in accordance with the price of bread. This placed everybody in the countryside on a "guaranteed minimum." The rise in the cost of relief was geometric.

In order to put people back to work and unleash the industrial revolution Britain had to amend the poor law in 1834. Pity for the pauper had to be reconciled with pity for the laborer, the investor and the taxpayer, as Nassau Senior pointed out. So England came to accept the workhouse, a place that would guarantee a pauper enough to live on without making idleness sufficiently attractive to undermine such desirable characteristics as frugality, industry, and ambition.

The rise of affluence, however, dulled the common sense of the British people, and the Speenhamland mentality returned as the sentimentalists, following the recommendations of the radicals (Beatrice Webb and Prime Minister David Lloyd George),were seduced into accepting the idea of the Welfare State. With the Beveridge Plan (cradle to grave protection), the "difficult problem" raised by Nassau Senior in 1834 posed its dilemma all over again. How, under state welfarism, can one "afford to the poorer classes adequate relief without material injury to their diligence or their providence."

Mr. Hazlitt rather doubts that the problem can ever be resolved to everybody's satisfaction. He recognizes that it would be politically impossible to get the state totally out of the welfare business. But he sees some hope in the educative value of events.

Back in the late forties and early fifties Mr. Hazlitt warned that if Washington were to extend extravagant relief to other nations in the form of Marshall Plan and "Point Four" giveaways, it would not save the world. Government to government loans, he said at the time, would be squandered by political bureaucracies, and capital for free productive enterprise would thereby be diminished.

Mr. Hazlitt was considered hardhearted by the "liberals" of the fifties and sixties, but common sense is now coming to his support. The dollars that we have given away for international relief now haunt us as the balance of payments statistics turn against us.

Similarly, the inflation that has been caused by "welfare gone wild" is provoking the middle classes, including the blacks who have risen in the world, to cast a cold eye on unbalanced budgets and extravagant programs for such things as urban renewal and various make-work projects. It may take the final "inflation crisis" to bring us to our senses.

But Mr. Hazlitt, after waiting some twenty years, may find that it is at last possible to teach people "economics in one lesson," to quote from his best-selling book of that title.

The real solution to the problem of poverty does not lie in any government relief system, or in any endeavor to redistribute wealth or income. It lies, says Mr. Hazlitt, in increased production. One increases production by making investments in more efficient tools. The free-swinging enterpriser, using capitalist savings, is the true hero of the war on poverty. 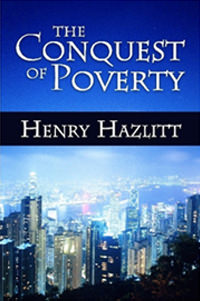 How long will it be before our intellectuals begin to see through fallacies that are as old as the economics of the emperor Diocletian? I would feel better about the prospects if such books as The Conquest of Poverty were to be reviewed on the front page of the New York Times Sunday book section. This is not likely to happen tomorrow. But events will continue to call the turn. What Mr. Hazlitt has to say about the need to free the producing interests of a nation is bound to take hold as our inflationary crisis deepens.

The politicos are already trying to limit upward revisions of the minimum wage by making special exceptions for job seeking adolescents. Common sense does break through. And even some of the big unions, the steel union, for example, now doubt the effectiveness of wage increases that run beyond productivity. If the unions ever get the idea, can the "intellectuals" remain far behind? Mr. Hazlitt may yet become a prophet with honor in his own country.