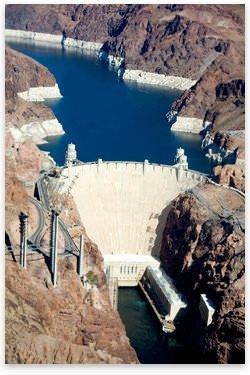 Economics professor Bernard Malamud not once but twice invited the crowd in Las Vegas to visit nearby Hoover Dam to see for themselves an example of the productive assets that were created by Franklin Delano Roosevelt's (FDR) New Deal. Professor Malamud was recruited to plead the Keynesian side of the argument in an "FDR's Depression Policies: Good Deal or Raw Deal?" debate with the Foundation for Economic Education's (FEE) Lawrence Reed during FreedomFest.

I finished my masters degree from UNLV under the tutelage of Murray Rothbard but I started my coursework with a class or two from professor Malamud, who, while being as Keynesian as they come, is at least sympathetic to the Austrian view when it comes to explaining speculative bubbles. He certainly took on Mr. Reed with good humor in front of an unfriendly, anti-FDR audience.

Malamud's thesis is that no matter what your ideology, New Deal economics worked! The economy was in the midst of a terrifying deflation spiral. Treasury Secretary Andrew Mellon was saying things like "Liquidate labor, liquidate stocks, liquidate farmers." The money supply was dropping, strangled by a rigid gold standard. The private sector was not eager to invest, so an alphabet soup of federal programs — like the CCC, CWA, WPA, FDIC, SEC, FSLIC — had to fill the void, putting people back to work, stimulating aggregate demand and providing for FDR's four freedoms: freedom of speech, freedom of belief, freedom from want, and freedom from fear. At the same time, FDR's "playing with the price of gold" as Malamud put it, loosened up the money markets.

Recovery (or reinflation) started as soon as 1933 and was only sidetracked in 1937, when the stimulus was pulled back. The "mistake of 1937" was made, according to the UNLV professor, when FDR's administration went back to listening to Andrew Mellon and instituted the austerity programs FDR had promised during his initial campaign.

When his turn came for rebuttal, Reed joked that he "felt like a mosquito at a nudist camp; I know what I need to do, but I don't know where to begin." After his free-market case was made and the Keynesian case was destroyed, Reed quipped, "The economy recovered when FDR didn't."

Keynesians erect a pretty low bar when judging the productivity of government stimulus projects, but the results of the concrete monster known as Hoover Dam have been devastating. Hoover described the dam as "the greatest engineering work of its character attempted by the hand of man." The massive structure cost $49 million (or $736 million in inflation-adjusted dollars) and measures over 726 feet in height and more than 1,200 feet in length. It took five years and 4,360,000 cubic yards of concrete to build, and was finished two years ahead of schedule. About 16,000 people worked on constructing the dam, with over 100 losing their lives in the process.

Just as the Keynesian policies of the New Deal tried to cheat the laws of economics, government's damming of the Colorado River attempted to cheat Mother Nature by bringing water to the desert southwest — water that just isn't and never was there. The great western explorer John Wesley Powell was booed out of the room when he told the irrigation congress, "Gentlemen, you are piling up a heritage of conflict and litigation over water rights, for there is not sufficient water to supply the land."

"Gentlemen, you are piling up a heritage of conflict and litigation over water rights, for there is not sufficient water to supply the land."
– John Wesley Powell (explorer)

But 75 years ago, when the dam was nearly completed, FDR proclaimed during his dedication speech that millions of present and future residents of the southwest could count on "a just, safe, and permanent system of water rights." The turbulent Colorado River that vacillated between droughts and floods would be tamed and become "a great national possession" and be counted on for irrigation to support a human migration seeking mild winters and new opportunities.

"The nation took him at his word," writes Michael Hiltzik, author of Colossus: Hoover Dam and the Making of the American Century. "Since that dedication year, the population of the seven states of the basin has swelled by about 45 million. Much of this growth has been fueled by the dam and its precious bounties of water and electrical power."

As Hiltzik points out, the dam's water promise gunned the growth of southern California cities and attracted farmers to the west to grow water-intensive crops like cotton despite the lack of normal rainfall required to support this kind of agriculture.

Just as government stimulus programs and artificially low interest rates that promise to spur growth and make up for the lack of private investment never work, Hoover's promise that his dam would, as Hiltzik writes, "provide all the water their states could conceivably need to fulfill their dreams of irrigation, industrial development and urban growth" is literally drying up. The water level at Lake Mead is down 120 feet from its high-water mark, revealing a white "bathtub ring."

Now that millions have migrated to the southwest and private industry has invested millions of dollars, Hoover and FDR's promises have confined those living and doing business in the west "in the straitjacket of an ever-intensifying water shortage," notes Hiltzik. And while Interior Secretary Gale Norton claimed to have stilled the "conflict on the river" back in 2003 with the signing of two-dozen agreements transferring water rights between various Indian tribes, cities, and governments, the battle for water will rage on. The supply will never catch up with the demand.

After the ten-year drought, another $700 million is now being spent to install an additional intake pipeline into the diminishing Lake Mead. Almost 90 percent of the drinking water for Las Vegas comes from the lake. The new intake pipeline, officially known as Intake No. 3, "will reach deeper into the reservoir to protect the valley's water supply should the lake shrink low enough to shut down one of the two shallower straws," reports the Las Vegas Review-Journal.

However, the cost of this project is likely to rise, because the tunnel being excavated for the pipeline unexpectedly filled with water earlier this month. But this cost overrun shouldn't trouble Keynesians, because the additional taxpayer money just provides more stimulus, right?

Those in government never learn. They can't print prosperity, and more water won't magically appear if they dam a river. While the man on the street believes government infallible, politicians and bureaucrats cannot calculate the economic profits and losses of government interventions. Ludwig von Mises made the point that government interventions inevitably lead to unintended consequences, leading government to constantly intervene further. So governments will fight over scarce water, and private use is increasingly being restricted by local ordinances.

The New Deal dam project that professor Malamud is so proud of provided a few thousand jobs 80 years ago, but has spurred migration, farming, and development that is likely unsustainable and may ultimately be the biggest malinvestment in history.