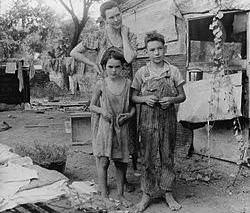 This year is the fiftieth anniversary of Murray Rothbard’s America’s Great Depression. In that work, Rothbard masterfully achieves three objectives.

1. He provides a restatement and extension of the Austrian theory of the business cycle (ABCT) while expertly defending the theory against critics;

3. He applies microeconomics, with special attention to what economists Richard Vedder and Lowell Gallaway1 have called the “von Misesian-classical position on labor markets,” to show how government interventions turned what would have otherwise been a bust followed by a brief “garden variety recession,” into a prolonged depression.

Rothbard’s analysis ends with 1933, as the destructive interventions passed from the Hoover New (raw) Deal to the better-known Roosevelt New Deal. A complete Austrian analysis of the Great Depression would include an analysis of all the policy errors and regime uncertainties created by both administrations. This truly was, properly understood, “The Hoover-Roosevelt Depression.”

And, as argued by Robert Higgs (“Regime Uncertainty: Why the Great Depression Lasted So Long and Why Prosperity Resumed after the War”) and Vedder and Gallaway (“The Great Depression of 1946”), this Depression ended not with the beginning of World War II2, but in the post-war recovery which occurred to the surprise of the Keynesian economists who were predicting a return to depression-like conditions. This return to prosperity occurred despite large declines in government spending and a large influx of surviving military personnel into the labor markets (see Arnold Kling’s “The Austerity of 1946” and Robert Higgs’s “The Myth of Pent-up Demand and the Successful Reconversion after World War II”).

Higgs’s work filled in some of the gaps in the Austrian analysis of the Great Depression left by Rothbard, but the most detailed analysis of unemployment in the Hoover-Roosevelt era, which was based on a Misean labor market framework, was done by Vedder and Gallaway, first in “Wages, Prices, and Unemployment: Von Mises and the Progressives” and later in Out of Work: Unemployment and Government in Twentieth-Century America. Their extensive research was originally published in Volume I of the Review of Austrian Economics (edited by Murray Rothbard)3. This extensive work supplements and verifies Rothbard’s arguments in AGD and extends the analysis to the Roosevelt New Deal era. Unfortunately, like the work of Rothbard on the Great Depression, the works of Higgs and Vedder and Gallaway have had too limited (none?) an impact on the economics profession despite their conclusive evidence. Vedder and Gallaway (67-68) wrote:

One last concluding remark. Von Mises, and others like him, were correct in rejecting the “progressive” view that the level of money wage rates does not matter. Not only is it important but, in conjunction with the levels of prices and productivity, it is the key to understanding patterns of variation in aggregate levels of employment and output. With the aid of von Misesian-classical analysis, such disparate phenomena as high unemployment rates, low unemployment rates, high unemployment accompanied by inflation (stagflation), low unemployment in unison with inflation, swift economic recoveries, and aborted economic recoveries can be understood in an intelligent fashion. No special economics are needed for each situation. What other theoretical apparatus can make the same claim?

In the Mises Daily, “The Hoover-Roosevelt Depression,” Mises Institute faculty Mark Thornton, Joe Salerno, and John Cochran highlighted work by Harold L. Cole and Lee Ohanian.4 This work by Cole and Ohanian was highlighted, not because it travels ground unfamiliar to Austrian economists, but because it appeared in highly prestigious mainstream journals, the Journal of Political Economy (JPE) and the Journal of Economic Theory (JET). While the works do not cite Vedder and Gallaway, the 2009 JET article by Ohanian does cite Rothbard’s AGD. More recently (“The Macroeconomic Impact of the New Deal” in the Routledge Handbook of Major Events in Economic History [Routledge International Handbooks, 2013]5), Ohanian has recognized Higgs’s work on regime uncertainty as also relevant for understanding why and how government interventions, not markets, were the cause of the length and severity of the Great Depression.

Since it comes to similar historical and policy conclusions as some Austrian analysis, work in the “real business cycle” framework draws criticisms from macroeconomists who favor aggregate demand deficiencies as the explanation of recessions. The major response to Austrian analysis by most macroeconomists had been to ignore it. Given the high profile outlets of Cole and Ohanian, this strategy has proved more difficult for their work.”

Thus in a comment on “The Hoover-Roosevelt Depression,” João Marcus Marinho Nunes writes, “Cole & Ohanian are deceptive,” and then refers the reader to his blog posts “Bashing Cole & Ohanian from another angle” and “More evidence on how Cole & Ohanian were deceptive.” In those posts, he defends a demand-side view (market monetarist) relative to Cole’s & Ohanian‘s supply-side analysis of the post-1933 “recovery” and the 1937 “recession within a depression,” and by implication relative to the Rothbard, Higgs, Vedder and Gallaway Austrian explanation as well.

Since Shawn Ritenour provides an excellent general critique of market monetarism in “Nominal GDP Targeting: New-Fangled Monetarism or Old-Fashioned Keynesianism?” and Steven Kates develops the broader theoretical arguments undermining the aggregate demand approach to business cycles and economic crises in “Why Your Grandfather’s Economics Was Better than Yours: On the Catastrophic Disappearance of Say’s Law,” a detailed critique of market monetarism will not be attempted here. However, the reader should be aware of Kates’s general principle, that underlies the Austrian approach, “MEN ERR IN THEIR PRODUCTIONS, THERE IS NO DEFICIENCY OF DEMAND [emphasis original].” Kates extends his argument in “The Errors of Keynes’s Critics,” where he concludes: “There is no such thing as an independent force that can be described as aggregate demand.

If you want to get to the essence of Say’s Law you must never think in terms of aggregate demand and aggregate supply. Just drop it from all conceptual discussions of the economy and I think, although I can’t be sure, you will find yourself necessarily thinking about issues in the same way as the classical economists. As I have argued in my Say’s Law and the Keynesian Revolution (Elgar 1998), if you want to defeat Keynesian economics, you need to wage war on the very notion of aggregate demand. Nothing else will do.6

Forbes columnist John Tamny has also recognized and commented on how this method of macroeconomic reasoning leads to error and clouds policy judgment for those committed to a demand side analysis, whether they call themselves Monetarists or Keynesians. His conclusion from “Monetarism and Keynesianism: Identical Sides of the Same Adolescent Coin”:

What’s perhaps most comical about these two Schools [monetarists and Keynesians], and it speaks to just how similar they are, is that both sides think a lack of their economic poison is at the heart of our malaise. Readers are surely familiar with Paul Krugman’s frequent Keynesian droolings about how the U.S. economy suffers because the federal government hasn’t spent enough of our money. Monetarists claim much the same; their view that the economy hasn’t recovered because our central bank hasn’t printed enough of our money. How these two Schools are enemies is one of life’s major mysteries given how they both put demand on a pedestal above all else, and both are convinced economic rebirth is only a trillion dollars of spending or many more trillions of dollar printing away.

The sad truth is that the U.S. economy struggles today thanks to the imposition of both pathetic ideologies. Government spending has risen to nosebleed levels alongside dollar creation in a similarly grotesque way. The economy sags as a result. Both sides should walk away from the discussion with the visible failures of their ideas well in mind. Only then, as in only when these adolescent twins cease poisoning the U.S. economy, will it resume the growth path that prevailed in the ’80s and ’90s.

This recent work by Cole and Ohanian is important and was highlighted by the Mises Institute faculty, because it presents to Keynesians of all stripes an exercise in Robert Higgs’s “interpretative economic history”7 that comes to conclusions similar to, and thus reinforces work previously done by, Austrians or fellow travelers which had been mostly, until recently, ignored outside Austrian circles. Ohanian (“The macroeconomic impact of the New Deal”) concluded:

The economy remained far below trend throughout the [Roosevelt] New Deal, in part reflecting New Deal industrial and labor policies that substantially distorted normal competitive forces of supply and demand. The policies depressed employment and output by raising prices and wages above normal, competitive levels in many sectors.

He further argued that, unlike the Keynesian argument that investment and thus output and employment remained low during the depression because of pessimistic expectations, the evidence from his model indicated that investment was low because of “significant government interventions that depressed employment.” Further, Ohanian cautioned that the estimates of the adverse impact of New Deal policies may be on the low side, as his findings do not include the impact of other interventions associated with the New Deal such as Higgs’s increased uncertainty concerning property rights and large increases in taxation of income from capital. Per Salerno, “one is tempted to say “hardcore”—Rothbardian” in describing these conclusions.