The Hoax of the Food Desert 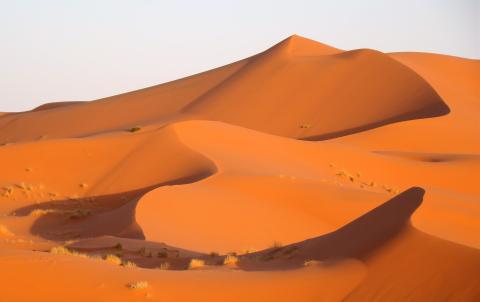 Murray Rothbard once observed the seasonal discovery of "some brand-new category of the pitiable." The "homeless" fell into this class and he also wondered what the new category would be. The unclothed? The ill-shod? The thirsty? The candy-deprived? "How many more millions are standing in line, waiting to be trotted out for consideration," he asked?

This summer, the social problem in need of fixing is the tragedy of the "food desert." Now, once upon a time, people knew what a "desert" was. It was a very arid region in which there was little or no rainfall and where crops and other vegetation could not grow.   Unfortunately, like so many other useful terms made downright silly, the word "desert" has been transformed to be whatever the pundits claim it to be.

According to a recent story in the Associated Press, we now have "food deserts" in this country, which is another way of saying that some people live in places that are not served by large grocery chains. Thus, in order to purchase food, they either have to walk for a long distance (up to a mile or more in some places) or drive longer distances. These "deserts" can be located in rural or urban settings; the common thread is the lack of a nearby Safeway.

As one who in his professional life has heard numerous complaints about the alleged "oppression" that is created by the presence of a Wal-Mart or some other large chain store, it is interesting to see how the academic left shifts gears and now blames these same retailers for not having enough stores in existence. Social activists have worked overtime to keep the Wal-Marts and Safeways from opening in rural and urban areas; now we see that the real problem, according to activists, is that many rural and urban people do not have access to the inexpensive food that these markets sell.

For those not aware of this current "crisis," a "food desert" is an area that is not readily served by a large grocery chain. The AP story tells of people in small rural communities who either must drive long distances to grocery stores or are "forced" (AP’s term) to purchase food from convenience stores where prices are higher and the selection of fresh meat and vegetables is almost nil.

According to the story, rural and urban communities that once were served by many small, "Mom and Pop" grocery stores now face no stores at all, since the Wal-Marts and Safeways have choked out the competition and forced these stores to close. Yet, if one thinks about it logically, the theme does not make sense.

Take the story’s account of a small store in Weld, Maine, for example. According to the AP, the store once served people in the community, but now is poorly stocked because the owners cannot compete with the price and selection of the two Wal-Mart superstores that have opened within 20 miles of the store. While one can understand the struggles of a small grocer in that situation, how this can be classified as a "food desert" situation makes no sense. In fact, people living near Weld now have choices that were not possible until recently. Either Wal-Mart is in competition with the Mom and Pop, in which case it serves the same customer base, or it is not.

Ironically, Wal-Mart made its start by providing lower-priced goods to people in rural and small-town areas, something that other large retailers had held was not cost effective, which meant that people in sparsely-populated places did not have access to such goods unless they traveled to cities. (Wal-Mart was able to develop an outstanding distribution system that first enabled the chain to be profitable in places ignored by other retailers, which later led to Wal-Mart being able to compete effectively with established retailers once the company decided to move into the cities and suburbs.)

The story also tells of a retired plumber who travels 400 roundtrip miles each month so he can purchase the food he wants because the local stores charge too much. While economists might look askance at such a situation, one supposes that the irony here is too much for a typical American journalist to fathom. Although the New Hampshire community where this retiree lives is remote, it certainly is not 200 miles away from low-priced shopping areas in that state.

According to the AP, he combines his shopping with visits to his friends 200 miles away because the crackers and cheese that he likes costs double at home what he can pay on his excursions. Again, the logic used by the reporter boggles the mind. (That a journalist would see no irony in writing that a person travels 400 miles to save $2 on cheese and crackers is beyond description. The man simply combines his visits with his food shopping, which is hardly unusual. Furthermore, using this situation to constitute "proof" that America is full of "food deserts" is silly; if anything it would demonstrate that no "crisis" exists in the first place.)

For that matter, one could write of "theater deserts," "hospital deserts" or "video store deserts" to describe rural life in America. What should amaze the readers of this story is not that rural areas are devoid of stores, but that that Wal-Mart is able to successfully open stores in rural communities and make money. The previous story about the small Maine grocers having problems is not "proof" of a "food desert" in that area, but rather demonstrates that people in that community have access to the same goods—and the low prices that accompany those goods—as people do in the suburbs, which is only a crisis in the minds of social activists who wish electricity and running water had never come to the rural places.

The situation regarding the lack of grocery stores in urban areas is even more ironic. For example, when activists in Inglewood, California, recently prevented a Wal-Mart superstore from opening in that area, the press hailed it as a "great victory" for the little people. To put it another way, American journalists hold that it is both wonderful and terrible that people in the inner cities don’t have a nearby Wal-Mart.

There is a dearth of grocery stores in urban settings for two reasons: the first is the prevalence of street crime and the open hostility of activists to those brave individuals who do manage to open small stores in cities, and the second is the success that organized anti-capitalist groups have had in keeping large stores out of inner cities.

In the past two decades, a number of Korean immigrants have opened small stores in urban areas that previously had been served by nothing but empty storefronts. However, instead of being happy that people have invested their life’s savings in such stores, many residents have been scornful toward the Koreans and often downright violent.

In the early 1990s, an elderly Korean woman accidentally shot and killed a young black teenager who the woman suspected was shoplifting in her store. The killing, not surprisingly, outraged many blacks, and Los Angeles Urban League President John Mack and Congresswoman Maxine Waters used that incident to justify the burning and looting of Korean-owned stores by blacks during the Los Angeles Riots of 1992. (When asked by ABC’s Ted Koppel about the attacks on Koreans, Mack—while Waters nodded her head—said that the attacks would stop "when Koreans stop blowing away their black customers.")

However, during the early 1990s, armed robbers murdered 12 Korean grocers and store owners in Los Angeles, and many Korean stores had been robbed or vandalized. In New York City, Al Sharpton and many of his fellow activists have organized boycotts and demonstrations against Koreans and have encouraged blacks to destroy Korean-owned or leased property and to drive such merchants out of business.

To put it another way, the demand for fresh produce and the like exists even in the relatively poor inner cities, but those who try to meet that demand often do so in peril of their lives. Furthermore, those who try to open such businesses should expect an avalanche of negative press from those same journalists who decry the "food deserts" and demand government intervention.

So-called community activists, who generally are ideologically anti-capitalist suburban whites, have been successful in organizing opposition to larger retailers and grocers in the inner cities. The recent attempt to keep Wal-Mart from Inglewood is a good example, but there are others as well. One needs only to read activist publications like Sojourners to understand the absolute hostility that these community organizers have to anything that might smack of a free market. Furthermore, such activists always receive sympathetic and admiring coverage from the news media.

The activists are nothing if not delicious in their own irony. For many years, these people have decried the high prices and lack of choice in small grocery stores, calling such people "ghetto merchants," "monopolists," and the like. Now, when a large store like Wal-Mart comes calling, these same activists now decry the destruction of small business and decry consumer choice and low prices.

Yes, people who choose to live in rural communities are going to have to travel longer distances to grocery stores than their suburban counterparts. (When I lived in rural South Carolina a few years ago, the nearest grocery store was 15 minutes away—and our church was 20 miles away, but I don’t see the AP writing of a "church desert.") Urban communities that are hit by crime and other problems also are unlikely to have the shopping choices of suburbanites.

Yet, neither of these situations is a "crisis," as the AP and some sociologists might claim, and there is no need for government intervention to solve it (as the end of the story suggested). They are facts of life, but even in these situations, entrepreneurs have attempted to meet consumer demands. It is government, not the free market, which has stifled entrepreneurship, making it difficult for many people in these various communities to purchase food.