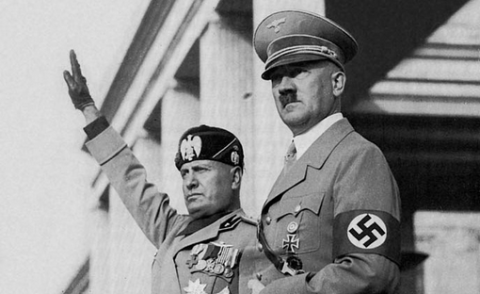 For today's generation, Hitler is the most hated man in history, and his regime the archetype of political evil. This view does not extend to his economic policies, however. Far from it. They are embraced by governments all around the world. The Glenview State Bank of Chicago, for example, recently praised Hitler's economics in its monthly newsletter. In doing so, the bank discovered the hazards of praising Keynesian policies in the wrong context.

The issue of the newsletter (July 2003) is not online, but the content can be discerned via the letter of protest from the Anti-Defamation League. "Regardless of the economic arguments" the letter said, "Hitler's economic policies cannot be divorced from his great policies of virulent anti-Semitism, racism and genocide.… Analyzing his actions through any other lens severely misses the point."

The same could be said about all forms of central planning. It is wrong to attempt to examine the economic policies of any leviathan state apart from the political violence that characterizes all central planning, whether in Germany, the Soviet Union, or the United States. The controversy highlights the ways in which the connection between violence and central planning is still not understood, not even by the ADL. The tendency of economists to admire Hitler's economic program is a case in point.

In the 1930s, Hitler was widely viewed as just another protectionist central planner who recognized the supposed failure of the free market and the need for nationally guided economic development. Proto-Keynesian socialist economist Joan Robinson wrote that "Hitler found a cure against unemployment before Keynes was finished explaining it."

What were those economic policies? He suspended the gold standard, embarked on huge public-works programs like autobahns, protected industry from foreign competition, expanded credit, instituted jobs programs, bullied the private sector on prices and production decisions, vastly expanded the military, enforced capital controls, instituted family planning, penalized smoking, brought about national healthcare and unemployment insurance, imposed education standards, and eventually ran huge deficits. The Nazi interventionist program was essential to the regime's rejection of the market economy and its embrace of socialism in one country.

Such programs remain widely praised today, even given their failures. They are features of every "capitalist" democracy. Keynes himself admired the Nazi economic program, writing in the foreword to the German edition to the General Theory: "[T]he theory of output as a whole, which is what the following book purports to provide, is much more easily adapted to the conditions of a totalitarian state, than is the theory of production and distribution of a given output produced under the conditions of free competition and a large measure of laissez-faire."

Keynes's comment, which may shock many, did not come out of the blue. Hitler's economists rejected laissez-faire, and admired Keynes, even foreshadowing him in many ways. Similarly, the Keynesians admired Hitler (see George Garvy, "Keynes and the Economic Activists of Pre-Hitler Germany," The Journal of Political Economy, Volume 83, Issue 2, April 1975, pp. 391–405).

Even as late as 1962, in a report written for President Kennedy, Paul Samuelson had implicit praise for Hitler: "History reminds us that even in the worst days of the great depression there was never a shortage of experts to warn against all curative public actions.… Had this counsel prevailed here, as it did in the pre-Hitler Germany, the existence of our form of government could be at stake. No modern government will make that mistake again."

On one level, this is not surprising. Hitler instituted a New Deal for Germany, different from FDR and Mussolini only in the details. And it worked only on paper in the sense that the GDP figures from the era reflect a growth path. Unemployment stayed low because Hitler, though he intervened in labor markets, never attempted to boost wages beyond their market level. But underneath it all, grave distortions were taking place, just as they occur in any non-market economy. They may boost GDP in the short run (see how government spending boosted the US Q2 2003 growth rate from 0.7 to 2.4 percent), but they do not work in the long run.

"To write of Hitler without the context of the millions of innocents brutally murdered and the tens of millions who died fighting against him is an insult to all of their memories," wrote the ADL in protest of the analysis published by the Glenview State Bank. Indeed it is.

But being cavalier about the moral implications of economic policies is the stock-in-trade of the profession. When economists call for boosting "aggregate demand," they do not spell out what this really means. It means forcibly overriding the voluntary decisions of consumers and savers, violating their property rights and their freedom of association in order to realize the national government's economic ambitions. Even if such programs worked in some technical economic sense, they should be rejected on grounds that they are incompatible with liberty.

So it is with protectionism. It was the major ambition of Hitler's economic program to expand the borders of Germany to make autarky viable, which meant building huge protectionist barriers to imports. The goal was to make Germany a self-sufficient producer so that it did not have to risk foreign influence and would not have the fate of its economy bound up with the goings-on in other countries. It was a classic case of economically counterproductive xenophobia.

And yet even in the United States today, protectionist policies are making a tragic comeback. Under the Bush administration alone, a huge range of products from lumber to microchips are being protected from low-priced foreign competition. These policies are being combined with attempts to stimulate supply and demand through large-scale military expenditure, foreign-policy adventurism, welfare, deficits, and the promotion of nationalist fervor. Such policies can create the illusion of growing prosperity, but the reality is that they divert scarce resources away from productive employment.

Perhaps the worst part of these policies is that they are inconceivable without a leviathan state, exactly as Keynes said. A government big enough and powerful enough to manipulate aggregate demand is big and powerful enough to violate people's civil liberties and attack their rights in every other way. Keynesian (or Hitlerian) policies unleash the sword of the state on the whole population. Central planning, even in its most petty variety, and freedom are incompatible.

Ever since 9/11 and the authoritarian, militarist response, the political left has warned that Bush is the new Hitler, while the right decries this kind of rhetoric as irresponsible hyperbole. The truth is that the left, in making these claims, is more correct than it knows. Hitler, like FDR, left his mark on Germany and the world by smashing the taboos against central planning and making big government a seemingly permanent feature of Western economies.

David Raub, the author of the article for Glenview, was being naïve in thinking he could look at the facts as the mainstream sees them and come up with what he thought would be a conventional answer. The ADL is right in this case: central planning should never be praised. We must always consider its historical context and inevitable political results.