The Higher-Education Bubble Has Popped 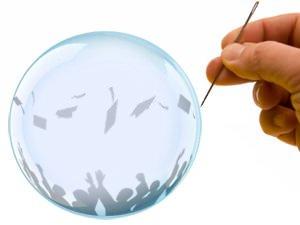 A college degree once looked to be the path to prosperity. In an article for TechCrunch, Sarah Lacy writes, "Like the housing bubble, the education bubble is about security and insurance against the future. Both whisper a seductive promise into the ears of worried Americans: Do this and you will be safe."

But the jobs that made higher education pay off during the inflationary boom, kicked into high gear by Nixon waving goodbye to the last shreds of a gold standard, came primarily from government and finance.

Everybody feels happy and is convinced that now finally mankind has overcome forever the gloomy state of scarcity and reached everlasting prosperity.

In fact, all this amazing wealth is fragile, a castle built on sands of illusion. It cannot last. There is no means to substitute banknotes and deposits for nonexistent capital goods.

Last week, HSBC Holding Plc announced plans to eliminate 30,000 jobs worldwide by the end of 2013. The job cuts will affect "support staff where we believe we have created an unnecessary bureaucracy in this firm over a number of years," HSBC chief executive officer Stuart Gulliver said.

At the same time that banks are trimming their fat, according to a Labor Department report released earlier this month, from May 2010 to May 2011 local governments shed 267,000 jobs and state governments 24,000. Local government employment in May, at 14.165 million jobs, was the lowest since July 2006.

An increase in the amount of real savings, which induces a fall in the interest rate and a lengthening of the production schedule, increases an economy's productive capacity, creating genuine growth brought about by the investment in higher-order goods such as factories and other production assets.

"Like all booms, higher education has been fueled by credit."

Conversely, easy, cheap credit fools entrepreneurs into believing that society's collective time preference has fallen, enticing them into investing in higher-order goods, such as land, factories, and the like — when in fact the collective time preference hasn't changed, and the demand for higher-order goods is merely a mirage. The result is booms and busts rather than genuine growth.

College degrees are similar to what the Austrians call higher-order goods. It's thought that a student will gain knowledge and seasoning in college that will make him or her more productive and a candidate for a high-paying career. The investment of time and money in knowledge pays through higher productivity and is translated into higher income. Higher education is the higher-order means to a successful career.

A true bubble is when something is overvalued and intensely believed. Education may be the only thing people still believe in in the United States. To question education is really dangerous. It is the absolute taboo. It's like telling the world there's no Santa Claus.

The excesses of both college and homeownership were always excused by a core national belief that, no matter what happens in the world, these were the best investments you could make. Housing prices would always go up, and you will always make more money if you are college educated.

Construction workers, police officers, plumbers, retail salespeople and secretaries, among others, make significantly more with a degree than without one. Why? Education helps people do higher-skilled work, get jobs with better-paying companies or open their own businesses.

Using data from the Center on Education and the Workforce at Georgetown University, Leonhardt asserts that dishwashers with college degrees make $34,000 a year while those without make $19,000.

No employer in their right mind would pay nearly double for a dishwasher with a college degree. However, there are plenty of fresh college graduates cobbling together multiple low-level jobs just to make ends meet.

"More college graduates are working in second jobs that don't require college degrees," writes Hannah Seligson in the New York Times, "part of a phenomenon called 'mal-employment.' In short, many baby-sitters, sales clerks, telemarketers and bartenders are overqualified for their jobs."

In the United States, 80,000 bartenders as well as 317,000 waiters and waitresses have college degrees. Nearly a quarter of all retail salespersons have a college degree. In all, 17 million Americans with college degrees are working at jobs that do not require a bachelor's degree.

"Young college graduates working multiple jobs is a natural consequence of a bad labor market and having, on average, $20,000 worth of student loans to pay off," said Carl E. Van Horn, director of the John J. Heldrich Center for Workforce Development at Rutgers.

Like all booms, higher education has been fueled by credit. In June of last year, total student-loan debt exceeded total credit-card debt outstanding for the first time, totaling more than $900 billion.

"Not only are the returns poor, but the quality of the product is poor."

All of this credit has pushed the average cost of tuition up 440 percent in the last 25 years, more than four times the rate of inflation. But while the factors of production on campus have been bid up, just as they are in any other asset boom, the return on investment is a bust. In 1992, there were 5.1 million mal-employed college graduates. By 2008, the number was 17 million.

Not only are the returns poor, but the quality of the product is poor (as in the case of new-construction quality in the housing boom). According to the authors of Academically Adrift: Limited Learning on College Campuses, 45 percent of students make no gains in their critical reasoning and thinking skills, as well as writing ability, after two years in college. More than one out of three college seniors were no better at writing and thinking than they were when they first arrived at their campuses.

Many projects contemplated and started during the real-estate boom are never completed, as prices are bid up, and owners run out of capital. Such is the case for many attending college, as over 45 percent of those who enroll as freshmen ultimately give up, realizing they lack the disciplinary and mental capital, and do not graduate.

Similar to the government push for increased homeownership, government is foursquare behind having more young people attend universities. One of President Obama's top goals is to increase the number of Americans attending college.

But why? "Among the members of the class of 2010, just 56 percent had held at least one job by this spring, when the survey was conducted," reported the Times recently. "That compares with 90 percent of graduates from the classes of 2006 and 2007."

And because they can't find jobs, 85 percent of college grads move back in with their parents after they graduate. According to a poll by Twentysomething Inc., a marketing and research firm based in Philadelphia, that rate has steadily risen from 67 percent in 2006.

Perversely, while the market tries to clear away malinvestments in finance and real estate, plus the jobs that supported them, colleges continue to turn out more business majors than any other discipline. In 2007 and 2008 there were more than 335,000 business degrees granted — 100,000 more than a decade before, according to the National Center for Education Statistics.

At the same time as law schools have a building boom underway, many new law grads can't find work or are working temporary jobs at $15 an hour.

As other industries close offices and downsize plants, the manufacturing base behind the doctor of jurisprudence keeps growing. Fordham Law School in New York recently broke ground on a $250 million, 22-story building. The University of Baltimore School of Law and the University of Michigan Law School are both working on buildings that cost more than $100 million. Marquette University Law School in Wisconsin has just finished its own $85 million project. A bunch of other schools have built multimillion dollar additions.

And while law grads can't find work, law schools are enrolling more students than ever before at tuition rates of $40,000+ a year. Segal explains that law-school tuition has increased at 4 times the rate of undergraduate education, which itself has increased 4 times the CPI. "From 1989 to 2009, when college tuition rose by 71 percent, law school tuition shot up 317 percent."

Students and their parents are investing in the higher-order good of a college degree, in the mistaken belief that plenty of jobs await college graduates at the end of four or six or seven years. However, time preferences haven't changed. The demand for consumer goods remains, and that's where the jobs are. The boom in demand for bankers, barristers, and bureaucrats is over.