GET NEWS AND ARTICLES IN YOUR INBOXPrint
A
A
Home | Mises Library | High-Frequency Trading: Menger vs. Walras 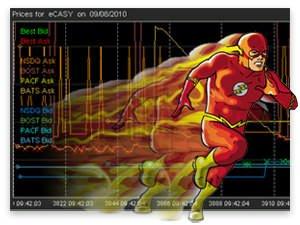 While Carl Menger and Léon Walras simultaneously discovered the principle of marginal utility, their ideas about the nature of market prices are very different. Walras was more interested in the final equilibrium prices arrived at by traders than the process by which these prices were formed. Therefore, he dramatically simplified the pricing process by imagining it as if it were governed by an auction mechanism capable of instantly calculating all prices in an economy.

For his part, Menger was fascinated with the actual process by which prices are formed. Rather than trying to abstract from the messy process of haggling by devising an artificial auction mechanism, Menger worked with a number of real-life pricing scenarios including isolated bargaining, monopoly, and competitive exchange.

As a result of these different approaches, prices in a Walrasian universe have different characteristics from prices in a Mengerian universe. Rather than registering at a single determinate equilibrium price, as is the case with Walrasian prices, Mengerian prices tend to be dispersed within an indeterminate range. In financial markets, we call this range the bid-ask spread.

Perhaps the best way to illustrate these two thinkers' differences on price is to use as our example the modern-day phenomenon of high-frequency traders (HFTs) and the digital tracks they leave as they operate in electronic equity markets.

High-frequency trading is the use of computer algorithms to guide trading decisions in securities markets. HFTs will hold securities for no longer than a few seconds, and for as little as microseconds. It is estimated that they now account for anywhere from 50–70 percent of all equity trades in North America.

Nanex, a market data firm, provides a number of hauntingly strange charts showing the behavior of HFTs operating on the microsecond level. We provide a few of these charts below.

This first chart represents price data for the ETF iShares S&P Target Date 2020 Index Fund (TZG). These quotes were submitted to the NYSE Arca exchange in a ten-second period just prior to the 9:30 a.m. market opening of September 23, 2010.

As in most securities markets, prices in equity markets are described by way of "bids" and "offers". The price at which a buyer is willing to purchase an equity is submitted to the relevant exchange as a bid. [1] In the chart above, the bid price is represented by the lower line. A number of bid orders may build up, with the "best bid" being the highest of the submitted bids. On the offer side, the price at which a seller is willing to offload an equity is submitted to the exchange as an offer. In the TZG chart above, this is the top line. Out of all submitted offers, the "best ask" (or "best offer") is the lowest one.

What is remarkable about the chart above is the steady cycling of the pattern of bids and offers and the microscopic space of time over which they occur. This is no human-created pattern, for no trader could submit this many quotes this fast, nor could they do so in such a remarkably consistent pattern. This is a pattern created by trading algorithms.

Or take this pattern:

The price quotes submitted to NASDAQ in the above chart — which represents a fraction of a second (11:44:55) — shows a rapidly repeating pattern of changing bid prices between $20.77 and $20.80 in the PowerShares DWA Technical Leaders Portfolio ETF (PDP). Note that the ask price, represented by the top line, remains constant, and that the bid price represented is not the best bid, but some price below the best bid. The rate at which the bid price is changing is far too fast for human comprehension. This is an HFT at work.

Or check out the algorithm action on Blackstone Group (BX) on September 15, 2010:

This chart represents three seconds of cycling bid and ask quotations submitted to the BATS exchange by an HFT, or group of HFTs.

There are a number of other charts at Nanex's website including the fascinating but very complicated one below. [2] See if you can figure out what is going on. Suffice it to say, battling algorithms on a number of different exchanges are competing to provide offer prices for Casey's General Store (CASY) over a period of around one second.

But if both sides in the price war think they can extract a bit more from the other, then the bargaining will continue. Like the HFTs in the charts above, they will try and read each other's intentions so as to determine their respective desperation or lack thereof, and with this information update their bargaining strategy. Says Menger,

Each of them will direct his efforts to turning as large a share as possible of the economic gain to himself. The result is the phenomenon which, in ordinary life, we call bargaining. Each of the two bargainers will attempt to acquire as large a portion as possible of the economic gain that can be derived from the exploitation of the exchange opportunity, and even if he were to try to obtain but a fair share of the gain, he will be inclined to demand higher prices the less he knows of the economic condition of the other bargainer and the less he knows the extreme limit to which the other is prepared to go. (Menger, Principles of Economics, p. 195)

upon their various individualities and upon their greater or smaller knowledge of business life and, in each case, of the situation of the other bargainer … there is no reason for assuming that one or the other of the two bargainers will have an overwhelming economic talent … therefore, I venture to state, as a general rule, that the efforts of the two bargainers to obtain the maximum possible gain will be mutually paralyzing. (p. 195–196)

Now let's bring this back to the HFTs in Nanex's charts. The odd patterns exhibited by trading algorithms are little more than graphical representations of Mengerian price duels. In these duels, the final price at which stock is transacted depends on each algorithm's respective talent and the "greater or smaller knowledge" of all duelers involved. Bidding algorithms may make quick feints up into the spread by issuing a sudden stream of new bid quotes, either hoping to goad other buying algorithms into following them, or to instigate algorithms on the sell side to respond. Algorithms providing offer quotes hope to do the same by making quick plunges down into the spread. These submitted quotations are meant to provide false information to other algorithms so as to confuse them, or to gather information from reacting algorithms so as to take advantage of them. By gleaning tidbits about their competitors, or providing them with false knowledge, algorithms and those who deploy them hope to gain for themselves a favorable spot in the bid-ask spread. [4]

In imagining the structure in which transactions are facilitated, Walras begins from a different starting point than Menger. Whereas Menger begins with bilateral exchange among isolated individuals and then worked through monopoly and competitive exchange, Walras begins with a fully formed and centralized auction market:

The markets which are best organized from the competitive standpoint are those in which purchase and sales are made by auction, through the instrumentality of stockbrokers, commercial brokers or criers acting as agents who centralize transactions in such a way that the terms of every exchange are openly announced and an opportunity is given to sellers to lower their prices and to buyers to raise their bids. (Walras, Elements of Pure Economics, p. 84)

Walras's auctioneer precludes the sort of market phenomena that Menger found so interesting. In particular, in a Walrasian market there are no bid-ask spreads, and therefore no reason for HFTs and their warring algorithms to exist.

Spreads arise, in part, because HFTs and other market actors do not know when or if they will be able to resell a stock — after all, there is no auctioneer who guarantees a sale come the next market period. Therefore, the spread represents the price that must be paid to a buyer or seller to compensate them for enduring the possibility of future illiquidity. Knowing that an auctioneer will always facilitate a future trade means that there is no threat of illiquidity, and therefore no reason to demand a spread so as to compensate.

Spreads also arise because market actors have different levels of knowledge about the securities being traded. The less informed therefore demand a price spread to compensate them for enduring the possibility of unintentionally buying bad securities from savvy traders, or selling good ones to them. In a Walrasian setup, the auctioneer informs all participants about the nature of goods available on the market. This levels the informational playing field and precludes any motivation for the emergence of a spread.

While infinite liquidity and information remove the psychological motivations for the emergence of a spread, the Walrasian setup also physically prevents the emergence of spreads. Because an auctioneer monopolizes the price-setting process by soliciting the amounts demanded from all actors at various prices prior to the market opening for trade, HFTs are effectively barred from fiddling themselves with various bid and offer prices so as to get valuable information prior to exchange. Secondly, all final prices and quantities are given to actors by the auctioneer. Because every trader is literally forced to accept the same price when the market opens, no HFT can transact in a way so as to obtain a better price. The market machinery, so to say, is out of HFT's hands in a Walrasian setup.

In a Walrasian market, HFTs simply have nothing to do. Walrasian prices don't hover in an indeterminate range bounded by bids and offers, as they do in a Mengerian market, but are singular and given. There is no reason for price duels, because the auctioneer removes both the psychological motivation for their emergence and the physical capacity for any sort of spread to arise. In short, Walrasian pricing can't explain the wondrous patterns that Nanex has isolated, but Mengerian pricing can.

[1] There are dozens of equity exchanges in the United States. Traders submit bids and offers for a given equity to whichever exchange they desire. The exchanges consolidate these quotes into the "consolidated tape" — the combined range of bids and offers over all exchanges for a given equity. The "best bid" and "best offer" is that bid or offer that is the best across all exchanges. The more prevalent exchanges (and their Nanex codes) include the NASDAQ (NSDQ), the BATS Exchange (BATS), the Boston Stock Exchange or NASDAQ OMX BX (BOST), Direct Edge (EDGE), and the Pacific Exchange or NYSE ARCA (PACF).

[3] The example begins on page 177 of Principles of Economics.

[4] According to Hülsmann, Mises: Last Knight of Liberalism (2007), Menger's early experience as a journalist writing market surveys at the Wiener Zeitung, a government controlled newspaper that reported on business and stock markets, influenced the content of the Principles of Economics. No wonder Menger's thought applies so well to modern stock markets.