A Greek Tragedy in the Making The recently approved eurozone bailout package, designed to buy more time for fiscally troubled nations such as Greece, Spain, and Portugal, is nothing short of a global Greek tragedy in the making. Of course, quite contrary to this, judging by the response of global stock markets, one would get the impression that happy times are around the corner. However, those of us who understand Austrian economics and believe in free markets and sound currencies can see one more nail driven into the coffin of paper fiat currencies such as the euro, US dollar, British pound, and Japanese yen.

Rescue plans these days don't muster up much confidence unless they are at least around the trillion-dollar mark. Sure enough, the announced package was just shy of a trillion dollars, in an effort to, at best, kick the can down the road by three years. In all, the EU and its member countries would kick in EUR 500 billion ($650 billion) while the International Monetary Fund (IMF) will chip in with EUR 250 billion ($325 billion). In addition to these measures, the Federal Reserve agreed to an unlimited dollar-swap agreement with the European Central Bank (ECB) to help contain any unexpected surprises in the coming months from the European debt crisis. The final price will almost assuredly be greater than one trillion dollars; governments are notorious for rosy deficit projections past the current budget year.

As Frederic Bastiat espoused, a good economic thinker looks not only at that which is seen but also at that which is unseen in order to gauge the efficacy of a policy in totality. Make no mistake, this supposed "containment" boondoggle was yet another bailout of the world's largest banks. The majority of the PIIGS's debt (Portugal, Ireland, Italy, Greece, and Spain) is held by large French and German banks. An outright default would've called into question the solvency of these banks for the second time in two years. In addition to being a bailout for the banks, it offers some respite to the PIIGS governments that were either experiencing or in danger of experiencing civil unrest. And it gives the short-sighted and jittery stock markets a breather. These are the most readily obvious reasons for the bailout.

The bailout, however, sets the stage for far greater problems down the road than if the PIIGS were allowed to default and restructure their debt obligations. The lessons of the public-workers-union riots in Greece are not lost on government dependents in the rest of the PIIGS. Observing their Greek counterparts, they may surmise that if enough buildings and vehicles were burnt, and enough people killed, their cowardly governments will cave in to their demands. Moral hazard rears its ugly head again. Therefore, it's a foregone conclusion that the supposed austerity measures to control spending are doomed to failure. After all, if these measures could've succeeded, they would've been implemented five years ago when the world economy hadn't yet hit the skids.

Greece is also looking to raise taxes, in combination with the austerity measures, to reduce deficits. Raising taxes would impact the Greek government's revenue collection negatively in two ways. Higher taxes would reduce economic growth and thus lower tax revenues. Further, high taxes would also drive more Greek businesses underground. Already, 25 percent of Greece's economy is said to be off the books. Therefore, over the long term, the negative consequences of raising taxes would far outweigh the initial, nominal increase in revenues.

"Make no mistake, this supposed 'containment' boondoggle was yet another bailout of the world's largest banks. A majority of the PIIGS's debt is held by large French and German banks."

The Federal Reserve's and IMF's participation in the eurozone bailout will not be lost on union members and politicians of heavily indebted US states such as California and Illinois. When the day of reckoning arrives for the US states who are unable to close their budget gaps and whose pension plans have huge funding gaps, they will be up in arms for their bailout as well. How could the US government politically defend its bailing out Greece via the IMF and the Federal Reserve and refusing the same for its own citizens? The idea that California would be allowed to default on its obligations when Greece wasn't is unthinkable. Therefore, the bailout of the PIIGS sets the stage for similar bailouts of bankrupt US states and cities.

The Federal Reserve's involvement warrants a closer examination. The Fed has indicated that it would participate in dollar-swap agreements with the ECB, similar to one it undertook in 2008. Without an audit of the Fed, we can only speculate as to what exactly this swap entails. However, a reasonable guess is an exchange of freshly printed euros by the ECB for freshly printed US dollars by the Fed at the current exchange rates.

The Fed would then use the euros to either directly or indirectly purchase the debt of the eurozone nations. The ECB in turn would use the dollars to purchase US Treasury debt. Therefore, this is just a convoluted scheme to monetize government debt. It's a cinch that the funds necessary for this bailout would be created out of thin air rather than raised via taxes or issuing debt. Only in the world of central banking and thin-air money creation can one bankrupt entity bail out another.

Thanks to the egregious inflation expected in bailing out Europe and states like California, the pool of real savings in Europe and the US could become an extremely endangered species. By far, the erosion of the real-savings pool is the most damaging aspect of the bailout. Unfortunately, real savings cannot be readily measured, and therefore it is difficult to monitor the damage done during the inflationary period. We do, however, see the results of the capital consumed when the inevitable recession ensues after the inflationary period.

Real savings is defined as the end consumer goods desired by workers, set aside to sustain them by producers of these goods in exchange for the workers engaging in more roundabout production methods. Real savings are the lifeblood of businesses. In order for more long-term projects to be undertaken, there must be a surplus production of final consumer goods that are subsequently saved.

For instance, a coal miner will be reluctant to work his job if, at the end of the day, he is unable to exchange the fruits of his labor at the coal mine for goods and services such as food, clothing, shelter, and leisure. He would just as soon quit his job at the coal mine and pursue another line of work, one for which he may lack specialization, just so he could acquire the immediate goods he desires. In an extreme case where the real savings pool is completely depleted, he would be forced to take up farming to feed himself and his family. Society as a whole, therefore, is poorer for his choice.

"The lessons of the public-workers-union riots in Greece are not lost on government dependents in the rest of the PIIGS."

Inflation to bail out inefficient or overpriced users of resources, such as government and labor unions, diverts the pool of real savings from wealth creators to these entities. Unlike money and bank credit, which stays in circulation (mistakenly thought to be productive as per the Keynesian multiplier theory), real savings can only be consumed once. Bailout recipients outbid wealth creators for the real-savings pool, thwarting their attempts to maintain or expand production levels. If there aren't enough real savings to cover even maintenance and depreciation expenses of businesses, then the amount of goods and services produced, the real wealth of society, will begin to decline. This is the main reason why countries experiencing runaway inflation also see a decline in economic activity.

The most infuriating aspect is that the eurozone, California, et al., will arrive at this same juncture again in about 3 years or so, when they must pay interest on their current debt plus the one trillion in bailout dollars and repay the maturing debt. In addition, they will probably be issuing new debt to fund continuing deficits. There is also a very good chance that creditors may refuse to rollover maturing debt, at which point this process will begin again.

Given that governments are reluctant to take their lumps now, what are the odds that they will do the right thing — outright default and debt restructuring — three years hence when the debt bubble is that much larger, the economy is in worse shape, and the pain of default and austerity is much higher than today's? The words "slim" and "none" come to mind. The world is firmly ensconced on the path to an inflationary depression. 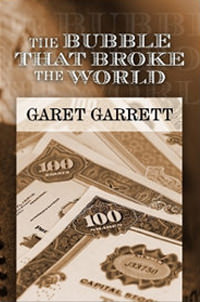 Given this dire outlook, what is one to do? Starting or acquiring a business, preferably one that is not capital intensive and could still function in a highly inflationary environment, is the surest way to preserve and maybe grow your wealth. For the vast majority for whom entrepreneurship doesn't come easily, dollar-cost averaging into precious metals such as gold and silver and select other commodities isn't such a bad idea to protect one's life savings. Inflationary depressions transfer wealth from holders of paper assets to holders of hard assets. The bailout has bought a modicum of time for the PIIGS before the noose tightens once again. Fortunately, it has also provided time for the prudent and informed to prepare for the crisis and acquire hard assets while the getting is still good.