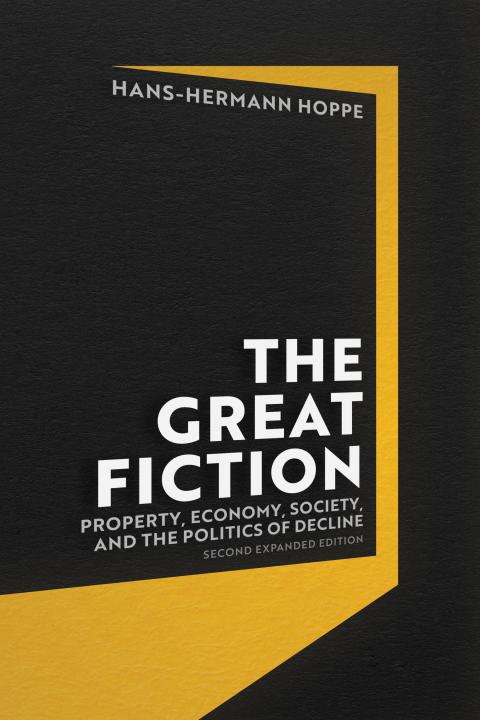 Congratulations! You hold in your hands one of the best collections of essays from one of the most vital and challenging thinkers on the planet. This book is a compendium of sorts, a cross section of Professor Hans-Hermann Hoppe’s best work across several decades arranged in one accessible volume. It originally was published by Laissez Faire Books in 2012, but languished without the audience it deserved. This volume rejuvenates that work with no less than six new chapters and more than a hundred new pages not found in the earlier version, along with some much-needed publicity and promotion.

Academics and social scientists today tend toward hyperspecialization, but Dr. Hoppe does not make this mistake. In this approach he joins a long line of important thinkers who did not confine themselves to a narrow academic discipline and did not care to “stay in their lane.” We forget that many twentieth century economists, for example, capably applied knowledge in history, philosophy, logic, anthropology, sociology, epistemology, politics, and ethics to their work—including Ludwig von Mises, Hoppe’s inspiration, and Murray N. Rothbard, Hoppe’s mentor. In that very important sense Hoppe continues and builds on the work of both men.

If you are new to Hoppe’s work, this is an excellent introduction and survey to his syntheses of history, anthropology, property, ethics, and state. If you already know and enjoy Hoppe, you will find here a “Hoppe reader”: many of his best and most representative articles across a range of topics in one accessible volume. Consider it almost a reference guide, from which readers can guide themselves back to his lengthy books and articles. But this book has something for everyone, from his rigorous yet often overlooked implications of capitalism and socialism to his broadside against democracy on property rights grounds. Even the new or casual reader will come away with an excellent understanding of Hoppe’s work and worldview.

The title of course comes from Claude-Frédéric Bastiat, the great nineteenth-century French economic journalist and liberal. Bastiat gave us “The Great Fiction” to describe the government mechanisms by which people attempt to live at the expense of others. The state is always present in Hoppe’s work, whether front and center or lurking in the background. Hoppe’s subtitle, Property, Economy, Society, and the Politics of Decline gives an unsubtle clue as to what readers should expect: a damning indictment of the political world and its twenty-first-century managerial superstates. In Hoppe’s world, the state is a wholly decivilizing institution: a predator rather than protector, a threat to property and peace. Markets and entrepreneurs produce goods, governments produce “bads”: taxation (theft), regulation (semi-ownership, thus semi-socialism), devalued money (central banks), war (defense), injustice (state courts and police), and the ruinous effects of high time preference (democracy). Like Bastiat, Hoppe has no patience for obscuring or soft pedaling the realities of our political world.

Part one of the book deals with the development of human society and the concomitant rise of two often opposing forces, namely property and states. Here Hoppe explains civilization rising against a backdrop of greater productivity enabled by the painfully slow shift from nomadic to agrarian living. Once sufficient calories could be yielded from land, concepts of family and ownership come into greater focus. The Enlightenment and Industrial Revolution create more and more prosperity, a proto-middle class, while feudal and monarchical arrangements face pressure from subjects developing greater wealth and literacy. This pressure explodes in the nineteenth century, as groups of largely decentralized kingdoms, principalities, territories, and city-states come under the full sway of national boundaries and governments. The twentieth century ushers in the era of full democratic government in the West: the Great War washes away the last vestiges of Old Europe, while growing economic and military power places the United States squarely at the helm of an international order.

Hoppe, of course, does not accept at face value the notion of the twentieth century as “liberal,” and in fact finds much of it illiberal. A particular favorite from part one is a chapter from Democracy: The God That Failed titled “On Democracy, Redistribution, and the Destruction of Property.” This essay beautifully encapsulates all of his fundamental critiques of modern mass democracy, namely that it produces bad, shortsighted politicians who care nothing about their nation’s capital stock; bad, shortsighted voters who care nothing about future generations; bad, expansionary economic and foreign policy; and bad, central bank money to pay for it all. Citizens, unlike subjects of yesteryear, enjoy the illusion that government is “us.” But an illusion is all it is, and Hoppe enjoys slaying this most sacred of cows.

Part two focuses on the hugely important but often overlooked relationship between money and the state. While kings and sovereigns once enjoyed debasing money to line their pockets, modern central banks turn seigniorage into something far more systemic and harmful. Fiat money enables politicians to fund welfare and warfare programs unimaginable in previous generations, increasing state power at every turn. It also distorts virtually every economic decision made across society, resulting in gross inefficiency and malinvestment. Society suffers, purchasing power erodes, but an undeserving and state-connected banking class benefits from all the new money. The quintessential Hoppean explanation for this sordid process, namely power, is nicely presented in chapter 9, “Why the State Demands the Control of Money.”

Part three forays into Dr. Hoppe’s economic theory, particularly in the area of method. Much of what we consider to comprise modern economics is wrong, and in particular wrong because it subverts the role of theory with empiricism, statistics, math, and modeling. Human actors apply deeply subjective values to all economic goods, values which change almost constantly. They are not atoms or vectors to be studied by testing hypotheses with data, but volitional beings to which we must apply axiomatic deductive reasoning. Hoppe gives readers a crash course in certainty, uncertainty, and probability, to show their uses and more importantly their limitations in economics.

Part four considers the important subject of intellectual history in the context of the broad Austro-libertarian movement, and includes a truly heartfelt speech from Hoppe on his friend and colleague Rothbard which is sure to move you. It also includes a typically Hoppean critique of Friedrich von Hayek’s political theory, which in Hoppe’s view compares very unfavorably to his work in monetary policy and the knowledge problem. This section finishes with the text of Hoppe’s sweeping talk titled “The Libertarian Quest for a Grand Historical Narrative,” a marvelous narrative about where we have been and where we might be going.

Finally, part five is a collection of interviews with Dr. Hoppe and autobiographical essays, including one conducted by yours truly. These interviews give a better sense of Hoppe as a person and thinker, and greater insight into his development both personally and professionally. Readers will find plenty of intellectual ammunition here, along with answers to many of the simplistic challenges posed to Hoppe’s idealized conception of a private law society.

Reading Hans-Hermann Hoppe is always a pleasure and never a chore, because both the subjects and Dr. Hoppe’s command of them quickly win the reader’s attention and even admiration. Most academic writing is almost unbearable; and as alluded to earlier it is designed to appeal only to a tiny group of PhDs who work in a very limited area or subfield. Hoppe, by contrast, produces academic treatments of much broader and foundational issues which manage to hold appeal for intelligent lay audiences. The footnotes, the diamond-sharp deductive logic, the references to earlier works and thinkers—all the hallmarks of academic journals are there—without the tedium and hubris.

Hoppe is the rare intellectual who never preens or bores, and never loses the plot. He keeps things close to the bone, one might say: not quite sparse but never ornate or superfluous. There are no twenty-page detours into some faintly related topic merely for show, a habit even the best of academics sometimes fall prey to. Not Dr. Hoppe. His work inevitably strips out the nonessential and gets to the root of the issue at hand. Sometimes that essential and unadulterated focus comports with popular sentiment and thinking; oftentimes it does not. Hence his controversial reputation in certain emotive circles. But Hoppe, like any good social scientist, has an obligation to seek truth and help us understand the world. Thus he never appeals to the reader’s existing pretensions or prejudices, but instead always demands we follow the praxeological path of understanding human actors as they really are.

In other words, truth—unadorned and uncomfortable as it may be—is the end goal of any good social scientist. Thus, Dr. Hoppe is an unflinching advocate for reality and logic, and one you cannot ignore.