The Great Credit-Crunch Hoax of 2008 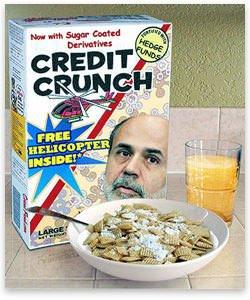 Remember the credit crunch? Of course you do. We'd never seen anything like it, or so the highest financial authorities and their lapdogs in the news media told us — not in a cool, calm, and collected way, either, but in a breathless delivery that suggested imminent economic doom unless the government immediately undertook to "do something." Which it did, of course, on a scale never before witnessed in US history.

So, looking back, as people are prone to do at this time of year, we can clearly see the telltale signs of the financial disaster that struck the financial markets last autumn: the terrible credit crunch, the "frozen" credit that portended a complete economic "meltdown" unless the government took drastic measures to head it off. (The government's spokespersons and the media's talking heads never got straight whether the thing was very cold or very hot, as they reached for horrifying metaphors in all directions at once.)

But, wait, something is terribly wrong in the statistical record! The devastating credit crunch, the greatest threat to this country since the Russians exploded an H-bomb, the most menacing economic event since the stock-market crash of 1929, the … (sputter) … (sputter) … (words fail me in the face of such terrors as it evoked in the minds of government ministers and financial titans of all stripes). Well, I am rather embarrassed, on behalf of all these giants of the ruling elite, to inform you that in retrospect the Monster from Lack-of-Liquidity Lagoon doesn't really show up as such in the most relevant statistical series.

Probably the most important measure of credit-market conditions is the amount of commercial-bank credit outstanding. These figures show that although the middle part of 2008 does stand out in the long view, it does so not by virtue of credit's frightening contraction, but only by virtue of its hitting a six-month plateau from April through September.

At no time during that interval, however, did the amount of commercial-bank credit outstanding fall below the amount outstanding at the beginning of the year. In short, credit was actually ample, indeed, at an all-time high; it simply stopped growing as usual for six months, stuck at about $9.4 trillion, while one Wall Street wizard after another told NPR that "no money is moving, the credit market is completely shut down" or some such cock-and-bull story.

After the six-month pause, commercial-bank credit zipped upward again, so that by the end of the year, the amount outstanding stood more than 8 percent higher than it had a year earlier. Some credit crunch! Année terrible, indeed.

But don't write off this silly little hoax too fast, because, however baseless it might have been in economic reality, it was manifestly good enough for government work. And that work has now placed US taxpayers on the hook for trillions of dollars of additional Treasury commitments and put all holders of US dollars and other dollar-denominated assets at risk of tremendous losses of their money's purchasing power.

The beauty of the Great Hoax of 2008, from the perspective of the ruling class, is that is was also a Great Scare, and such scares invariably serve as pretexts for the rulers' most audacious assaults on the peasants' lives, liberties, and purses. You'd almost have to admire the elite's ability to spook the rest of us into blind, unreasoning panic on such a flimsy basis, if it weren't for the fact that after the episode has passed, we find ourselves enormously worse off, our economic prospects diminished greatly, and our liberties throttled more tightly by an even bigger Leviathan, with nothing to show for it on the upside but the further enrichment of a handful of big bankers and other malefactors of great wealth and power.

Speaking as a self-appointed representative of the peasantry, I'd say that notwithstanding the thrills and chills we got out of it — the terrific excitement it brought to the boob tube while it lasted — the whole shebang now seems hardly worth the trouble it's caused us, not to speak of the trouble it holds in store for us as its consequences play out over the years to come.

[This article originally appeared on LewRockwell.com]