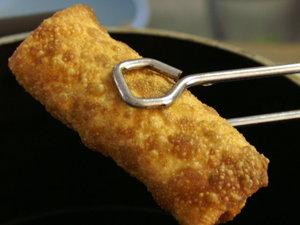 This week's internet-fueled Outrage of the Week is the case of Harvard attorney Ben Edelman who has insisted on "notifying the authorities" to punish a small restaurant for "overcharging" the professor to the tune of four dollars.

Boston.com reported on the case, posting the full email exchange. Now, the professor has received the sort of social-media drubbing you might expect from an internet world that's more likely to sympathize with an immigrant small businessman than they are to side with a man who obviously has a lot of free time on his hands, and likes to report people to "the authorities."

Nevertheless, Peter Jacobs at Business Insider has taken Edelman's side noting that the lawyer did indeed have a point. The restaurant should have correct prices posted:

It's not likely that someone else would have called out the restaurant on having out-of-date prices on its website, which many of the customers use as a reference for ordering food. Additionally, as Edelman emphasized, Duan even said the website had been "out of date for quite some time." Many customers likely ended up paying more money than they expected to due to advertised prices that were no longer applicable.

Yes, it's true that other people were likely paying more for their Chinese food than they initially thought they might when they perused the menu. But, in economics we can only observe the actions of people, and we cannot measure their thoughts.  Thus, what Jacobs ignores is the fact that the actions of the customers shows they consented to the final bill regardless of any discrepancy between the menu price and the final bill price. We know that Edelman claims that he thought the prices were different on the menu than on the bill. But his actions tell us his true preference was to simply pay the bill. Indeed, for all we know, Edelman knew the discrepancy beforehand and was hoping to use this to his advantage after the fact. Is this just speculation? Certainly. But the assertion that Edelman was tricked is also pure speculation. On the other hand, we have the actions of Edelman which show he was willing to pay the bill. His thoughts in his head are immeasurable and unobservable, and are irrelevant from the point of view of economics.

There's No Such Things as "Overcharging"

I don't know the exact take-out business practices of Sichuan Garden, the restaurant in question, but I assume — given the practices of most such restaurants — that a customer has not morally or legally committed to purchase the food the moment the order has been said out loud or typed into a web site. No, the only commitment comes at the time of payment, when the customer agrees to pay for the service rendered. Up until that moment, the customer can refuse payment if anything is not to his liking.

So, if the customer orders an egg roll that is priced at $4, but is delivered an egg roll that costs $5, the customer has not been given the product he ordered. In this case — if he cares enough to check each item — he may refuse to pay after the order has been placed but before payment. If he does consent to paying the final bill, then his demonstrated preference was to buy the food regardless of any other factor.

In such cases, the customer is never "overcharged" because he consented to the charge in exchange for the food. Or he refused, and was not charged. Meanwhile, Edelman and Jacobs assert that customer is somehow "tricked" by the restaurant. But, if the customer was told the total amount of the bill prior to payment (who pays a bill without being told the amount first?), then the customer was not in any way tricked. He consented to pay a certain amount and then was given food in exchange.

The only way trickery or fraud or "overcharging" is involved is if the customer was told his credit card would be charged one amount, but was then surreptitiously charged another. If the customer consented to a $50 charge, and the card was charged $50, then there’s no fraud.

But if the customer is unwilling to itemize the order before payment, that’s his decision. He has been told the total amount, has deemed it acceptable, and has concluded it’s not worth his time to check the menu price of every item and compare it to the invoice price.

In the Edelman case, it appears that he saw after the fact that he was charged $5 for what he thought was a $4 egg roll (or whatever the specifics were). And then, after having already agreed to a price — and eaten the food — went back and insisted that the government take action against the firm.

Edelman then goes on to suggest that the restaurant should be sued or punished for all the "overcharging" that has gone on with other customers, all of whom consented to pay the stipulated price by the act of paying their bills. The fact of the matter is that all these other customers, like Edelman, were also uninterested in itemizing their bill  — whether over the phone or in person with the delivery person — before paying the bill.

And why were all these customers unwilling to itemize their orders and check every price of every egg roll before finalizing the order? Well, because the customers concluded it was not worth their time to do so. For the customers, their preference — as demonstrated by their actions — was to "take their chances" with the final bill more or less reflecting the prices on the menu, or whatever figure the customer has in his head as being the price.

Edelman obviously understands none of this. For him, there is some mystical "correct" price that the consumer should pay out there, and any deviation from that price should be punished by government authorities.

Contrary to Edelman, however, the correct price is whatever price the customer is willing to pay to get his Chinese food. The stated prices on the menu become irrelevant the second the customer consents to pay a certain price for the total order.

The "Cure" Is Worse Than the Disease

Customers could of course make this menu-invoice comparison whenever they wish before handing over the money, but for Edelman and Jacobs, it is an unendurable hardship for the customer to have to check his bill using third-grade arithmetic before purchase,  and it is therefore more reasonable that government employees be hired, trained, and deployed to punish firms that don't update their online menus in a "proper" manner. What is proper is of course to be determined by government agents.

This is a classic case of the cure being worse than the disease. There is no doubt that some consumers have paid a few more nickels and dimes to firms than they initially thought they would. But, once all those nickels and dimes are added up, is the sum greater than the cost to the customer in taxes for creating and staffing a government bureaucracy to make sure your egg roll has the “correct price”? This seems unlikely. And of course, ultimately, such a government agency would be punishing firms for prices and services that the customers had already consented to.

As I write this, Twitter is telling me that Edelman has apologized to Sichuan Garden for his disagreeable and threatening behavior. If Edelman had merely informed Sichuan Garden that their business practices were objectionable and that they should stop, he would have been well within the realm of good taste. (This assumes the restaurant did not charge a different amount than was stated on the bill.) But, as far as we can tell, Edelman chose to report a peaceful, private firm that had not cheated him “to the authorities” and made additional threats of legal action. Edelman consented to a peaceful transaction with the restaurant, but upon reflection decided to demand violence and coercion to make up for his lack of due diligence. This immediate call for violence against the restaurant is what those who condemn Edelman noticed. A great many Americans live in fear of reprisals, fines, and worse from the state. Edelman, on the other hand, thinks such things should be employed against peaceful citizens over a matter of four dollars.