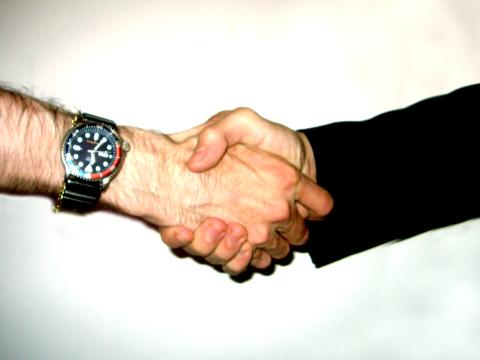 News Item: GOP Vice presidential pick Richard Cheney...from White House chief of staff for President Gerald R. Ford at age 34 through five terms in Congress to secretary of defense to his current tenure as chairman and chief executive officer of Halliburton Co. which is "working directly with nationalized oil companies around the world to develop their resources." (AP, July 26, 2000)

The defenders of free markets are often viewed as apologists for big business. Regulation of business is seen as necessary to the welfare of the public to prevent exploitation by selfish business people. Such a view would be hard to square with reality, with history both recent and distant.

As Murray Rothbard noted in condemning business-government partnerships, "We often fail to realize that the point of Big Government is precisely to set up such 'partnerships,' for the benefit of both government and business, or rather, of certain business firms and groups that happen to be in political favor." The same can often be said of government regulation of business.

The Case of Public Utilities

One prime example is occurring in the nation's utility industry. The nation's public utilities are slowly being deregulated, a process now underway in twenty-four states. Prices will not be totally regulated and independent power companies will be able to compete with utilities.

The coming deregulation has spurred investment and innovation already in the industry. Of course, some industry players are better situated than others. Securities analysts suddenly have to look much harder at the ability of a once-staid utility company to meet and maintain its dividend.

One market observer said that you could divide the utility companies into two camps; those that have cut their dividend and those that are going to cut their dividend. Competitive markets will mean significant investments for utilities to meet the rigor of future competition.

Energy Secretary Bill Richardson admitted that although America is a superpower, "it's got the grid of a Third World Nation." Competition will also mean the very real possibility of losses and ultimately failure.

Certainly, even in this state, the market will hardly be what Misesians would call free. In some states there will still be price caps, and/or subsidies, as well as a host of federal and state regulations that will continue to distort the pattern of production from what a truly free market would produce. Moreover, the utilities are surrendering control over their sprawling multistate network of high-voltage lines. These will be owned by new nonprofit operators charged with the responsibility of ensuring fair access to the grid--definitely not the stuff of free markets.

Yet many in the utility industry are scared to death of deregulation, a process now only in its infancy and one that free market advocates can only hope continues. The efforts of utility companies to halt deregulation were recently exposed in a Washington Post article by John Mintz titled "Utilities Secretly Lobbied Congress."

According to the article, some of the country's biggest firms spent approximately $17 million over the last 3 1/2 years through two front organizations with the express purpose of stopping Congress from deregulating their industry. Mintz reports that energy deregulation "...is an extraordinarily high-stakes struggle for the nation’s $300 billion-a-year power industry." Advocates for continued regulation include the old-line investor-owned public utilities. On the other side of the debate, in favor of deregulation, are large manufacturers looking for cheaper sources of power and independent power companies such as Enron that want the opportunity to compete with the utilities.

Why would utility companies want regulation? The fact that these companies decided to lobby Congress through two front organizations is evidence that they would like to hide the fact that regulation provides them with a monopoly privilege. They are protected from the threat of new entrants. Regulated life also provides a steady diet of rate increases over time.

As Rebecca Smith reported in a recent Wall Street Journal ("Gloom and Doom: New Rules, Demands Put Dangerous Strain on Electricity Supply"): "Utilities in states that haven’t deregulated earn their return based on the amount of equipment they put into service. The joke used to be that the utility industry was the only one where you could boost your profits by buying new furniture for your office."

Proponents of regulation typically point to the fall in real energy prices over time. The problem is that that we do not have a free market utility industry to make any comparison, and hence such a point has no meaning. In the regulated utility world, there was no market for rates and utility companies were shielded from consumer demands.

The utility industry, then, represents one example that ought to puncture the ridiculous claim that free market advocates are cozy with big business. People believe government protects them from price gouging, but all this time, the nation's utilities have been feasting at the public's expense.

Gouged by taxes to pay for regulators and enforcement agencies, the consumers are further exploited through unnecessarily high utility bills generated by protected State-granted monopoly privileges. All the while the sorry consumer sits by idly believing that he is protected by government from paying too high a rate. A greater fool can hardly be imagined.

The recent example of utilities should not be surprising. History is filled with examples of an often-cozy relationship between government and certain businesses. As Gabriel Kolko remarked, "The dominant fact of American political life at the beginning of this century was that big business led the struggle for the federal regulation of the economy."

The so-called "Progressive Era" is replete with incidences of cartels brought on by government regulation. The Interstate Commerce Act of 1887 created the railroad cartel that the railroads could not secure for themselves in the free market. Government helped create the railroad empires through land grants and subsidies.

But the largest, perhaps most devastating cartel created by government still lives on in the banking sector with existence of the Federal Reserve System and its attendant inflationary entourage of commercial banks. The commercial banks wanted a Central Bank to allow them to inflate together without the penalty such actions would bring in a free market. As Rothbard noted, the Central Bank was "their staff and shield against the winds of competition."

The Fed bolsters confidence in the banking system, thereby circumventing the important market discipline that bank runs, or the threat of bank runs, provided. It creates a lender of last resort, a safety net. Perhaps most importantly, it is the "cartelizer" that allows for massive expansion of credit. While bankers may complain at times about the actions of the Fed, no banker questions its very existence. To most bankers, it is difficult to imagine a world without the Fed. The Federal Reserve Act of 1913, after all, was passed with the blessings of the nation's largest banks.

Like utility regulation, these cartels (the banks and railroads being just two of the more prominent examples) are often created under the guise of doing what is in the best interest of the public. But as Rothbard pithily asked, "If these policies are designed to tame and curb rapacious Big Business, how is it that so many Big Businessmen, so many Morgan partners and Rockefellers and Harrimans, have been so conspicuous in promoting these programs?" These policies in fact benefit the very businesses it presumes to regulate.

To say that business people want their industries regulated is certainly a broad generalization and unfair to all those entrepreneurs who work and have worked to make our world a better place to live without resorting to government aid (and to those who actively fight against it).

The entrepreneur is a critical element in the market economy, as important as private property and sound money. The entrepreneur makes the whole thing go. The specific entrepreneurial function as Rothbard described it was "...the crucial directing element in guiding the process of production toward the desires of the consumers."

The corrupting influence stems from the existence of government, the apparatus of compulsion and coercion, and the candy store of goodies it represents to those who can control it. As Isabel Paterson asked in her classic book The God of the Machine, "Does the element of corruption inhere in business or in politics?" Her answer:

"Is it wrong to produce something or to process or exchange the product? No. Then it cannot impart corruption to anything else. Is it wrong to restrain, obstruct, or seize the goods of another? Yes. It is always wrong if done by initiating action (instead of recoil action). The potential for corruption then lies in politics not in business."

In addition, there are good theoretical reasons why regulation tends to favor the industries regulated. These are neatly summarized in Randall Holcombe's book Public Policy and the Quality of Life. For one thing, there is an incentive and knowledge gap. The bulk of the public has little incentive understanding utility legislation. However, the utility companies so affected have a strong incentive to be informed and involved so as to influence policies and ensure that they will be favorable to the industry.