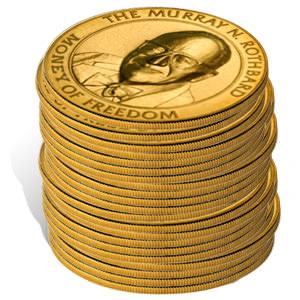 John Maynard Keynes thought he had pretty well killed gold as a monetary standard back in the 1930s. Governments of the world did their best to help him. It took longer than they thought. Gold in the money survived all the way to Nixon, and it was he who finally drove the stake in once and for all. That was supposed to be the end of it, and the beginning of the glorious new age of paper prosperity.

It didn't work out as they thought. The 1970s was a time of monetary chaos. What was worth a buck in 1973 is worth only 20 cents today. Stated another way: a dime is worth 2 cents, a nickel is worth a penny, and a penny is worth … nothing at all. It is an accounting fiction that takes up physical space for no reason.

Welcome to the age of paper money, where governments and central banks can manufacture as much money as they want without limit. Gold was the last limit. Its banishment as a standard unleashed the inflation monster and Leviathan itself, which has swelled beyond comprehension.

But guess what? Gold actually hasn't gone anywhere. It is still the hedge of choice, the thing that every investor embraces in time of trouble. It remains the most liquid, most stable, most fungible, most marketable, and most reliable store of wealth on the planet. It has a more dependable buy-sell spread than any other commodity in existence, given its value per unit of weight.

But is it dead as a monetary tool? Maybe not. Whenever the failures of paper become more than obvious, someone mentions gold and then look out for the hysteria. This is precisely what happened recently when Robert Zoellick, head of the World Bank, made some vague noises in the direction of gold. He merely suggested that its price might be used as a metric for evaluating the quality of monetary policy.

What happened? The roof fell in. Brad DeLong of Keynesian fame called Zoellick "the stupidest man alive" and the New York Times trotted out a legion of experts to assure us that the gold standard would not fix things, would hamstring monetary policy, would bring more instability rather than less, would bring back the Great Depression, and lead to mass human suffering of all sorts.

One thing this little explosion proved: newspapers, governments, and their favored academic economists all hate the gold standard. I can understand this. The absence of the gold standard has made possible the paper world they all love, one ruled by the state and its managers, a world of huge debt and endless opportunities for mischief to be made from the top down.

His only truly negative point was that under gold, we get more business cycles, but here he is completely wrong, as a quick look at the data demonstrates. And how can anyone say such a thing in the immediate wake of one of history's biggest bubbles and its explosion, which brought the world to the brink of calamity (and which still isn't over)?

Newsflash: it wasn't the gold standard that gave us this disaster.

As Murray Rothbard emphasized, the essence of the gold standard is that it puts power in the hands of the people. They are no longer dependent on the whims of central bankers, treasury officials, and high rollers in money centers. Money becomes not merely an accounting device but a real form of property like any other. It is secure, portable, universally valued, and, rather than falling in value, it maintains or rises in value over time. Under a real gold standard, there is no need for a central bank, and banks themselves become like any other business, not some gigantic socialistic operation sustained by trillions in public money.

Imagine holding money and watching it grow rather than shrink in its purchasing power in terms of goods and services. That's what life is like under gold. Savers are rewarded rather than punished. No one uses the monetary system to rob anyone else. The government can only spend what it has and no more. Trade across borders is not thrown into constant upheaval because of a change in currency valuations.

Of course the World Bank head was not actually talking about a real gold standard. At most he was talking about some kind of rule to rein in central banks that attempt what the Fed is attempting now: the inflating of the money supply to drive down the exchange-rate value of the currency to subsidize exports.

Still, it's good that he raised the topic. The Mises Institute has been pushing scholarship and writing about gold since its founding. To be sure, the issue of the gold standard is largely historical but no less important for that reason. The people who hate the gold standard of the past have no desire for serious monetary reform today.

We should be thrilled should the day ever come when monetary authorities really make paper money directly convertible into gold (or silver or something else). I doubt we can look forward to that day anytime soon. But there is one thing they could let happen right away: free the market to create its own gold standard by permitting true innovation and choice in currency. It's a fair guess that opponents of the gold standard would oppose that too, because, as Alan Greenspan himself once admitted, the people who oppose gold are ultimately opposed to human freedom.

This debate isn't really about monetary policy, much less the technical aspects of the transition. It is about political philosophy: what kind of society do we want to live in? One ruled by an ever-growing, all-controlling state or one in which people have freedom guaranteed and protected?