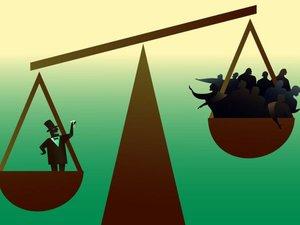 Inequality is a top news items for 2015 driven largely by the Baltimore riots, the minimum wage debate, Thomas Piketty’s book Capital in the Twenty-First Century, and now the entry of socialist Bernie Sanders into the race for US president.

The Left wants more welfare, better schools, free college, enhanced job training, and more. The Right, in contrast, wants welfare reform, charter schools, tax reform — not to be confused with tax cuts — and use of the negative income tax.

Both sides get it wrong. Neither side understands economic inequality, nor what causes it to change. Recently I argued that the problem of urban blight is caused by too much government and the solution is to radically reduce government in key areas in order to create jobs and entrepreneurial opportunities. The same thing applies to economic inequality: tinkering with government policies in one direction or the other does not solve the problem.

Some Inequalities Are To Be Expected

The first thing to note is that inequality is a natural feature of all societies, whether it is libertarian, socialist, or primitive. A well developed libertarian society tends to have a large middle class, a small lower class, and a revolving upper class. The low-income class is small because there are no legal barriers to opening new businesses, there are incentives to earn and save and be entrepreneurial. The upper class is “revolving” because there are no monopoly privileges or bailouts to maintain wealth.

The second thing to note is that public policy impacts or alters the natural inequality of society. Say, for example, that a government requires all doctors and lawyers to have a license to practice and then limits the number of licenses. Bingo! Doctors and lawyers are now almost immediately richer because they have used the law to limit their competition which means higher fees and salaries for those protected professions.

The Seen and Unseen: Government-Caused Inequality

Naturally, the size and shape of government policies have an impact on economic inequality. The job of the economist is to make sure everyone understands that government policies have obvious effects that can be seen, but also have effects that are not seen. In most cases, the effects that are seen are some direct immediate benefit to a particular group of people. Likewise, the unseen effects have circuitous, indirect negative consequences on a large group of people that grow larger over time. Frédéric Bastiat said that “the ultimate consequences are fatal.”

If the state provides generous welfare payments to poor people, this becomes an obvious direct benefit to the poor people who receive the money. However, in order to make those payments it is necessary to tax productive citizens, thus reducing their incentive to be productive. If being poor is the stipulation for receiving welfare payments, then people will have less incentive to be productive and escape from poverty. In the long run you end up with more poor people, a permanent poverty class, and a smaller economic pie to support the population.

The impact of taxes and welfare on income distribution are fairly well known. However, these well-known effects are generally disregarded or dismissed by those who want to “do something about economic inequality.”

Money is one important factor that is also ignored by both those on the political left and the political right. However, the monetary system and monetary policy have obvious and historically validated effects on economic inequality.

A monetary system dominated by a central bank, such as the Federal Reserve, that uses fiat money can expect to benefit certain people, such as bankers and people with debt. Likewise, because such a system is inflationary, it tends to hurt workers and savers. Such a system can be expected to hurt the lower and middle classes and enrich those in the financial industry and the upper class.

Hard Money and the Benefits of Deflation

A gold standard has historically had a tendency to be slightly deflationary. This means that wage rates, cash balances, savings, and bonds tend to gain purchasing power over time. So this type of monetary system rewards the hard working and frugal classes which leads to an expansion of the middle class.

This graph from the Pew Research Center provides enticing evidence of the differential impact of gold versus fiat paper money:

Austrian economists do not advocate any particular income distribution except the one determined by the market economy. Part of the answer to the problem of economic inequality is to return to an honest and sound monetary system including — but not limited to — the gold standard.