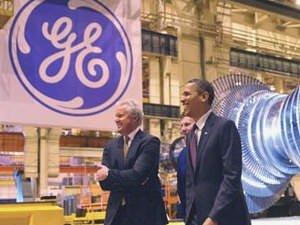 This is an adaptation of chapter 10 from Hunter Lewis’s book Crony Capitalism in America: 2008–2012, available in the Mises Store.

During the presidential campaign of 2012, an online commentator observed that President Obama had not met with his Jobs Council for six months. How could this be, the commentator asked, when jobs were foremost on the president’s agenda? The answer was not hard to discover.

The Council was headed by General Electric CEO Jeffrey Immelt, a noted Obama political backer. Other members included Penny Pritzker, an heiress who served as Obama’s finance chairwoman in 2008, and Richard Trumpka, president of the AFL-CIO, one of the largest Obama campaign contributors. The group was established after the 2010 mid-term election losses as a device to emphasize the administration’s focus on jobs but, more importantly, to recognize political allies and campaign donors and prepare for the 2012 presidential election. This was more or less acknowledged when, after the president’s re-election, it was disbanded, despite the persistence of high unemployment.

Why had the president chosen General Electric’s Immelt in particular as the head of this campaign arm? For one reason, Immelt was sympathetic to the president’s brand of state-led capitalism. He had gone so far as to say of China in a television interview: “The one thing that actually works, state run communism, may not be your cup of tea, but their government works.”1

In addition, employees of General Electric as a group had been Obama’s ninth largest campaign contributor in 2008, donating $529,855. These donations in part reflected the company’s close and indeed symbiotic relationship with government in finance, defense, green energy, television, technology, and export, and its status as a primary beneficiary of the administration’s stimulus bill. It was impossible to say where the government stopped and General Electric began and vice versa.

Even more importantly, the government rescued the company from what seemed likely to be bankruptcy in 2008–2009. It also let the company off with an exceptionally mild slap-on-the-wrist fine of $50 million for cooking its books in the late 1990s and 2000s, when there might instead have been a large fine and criminal fraud charges.2 As a further indication of its exceptionally close ties, the Obama administration inserted language into the late 2012 fiscal cliff bill that enabled the company to avoid paying much federal income taxes.3

How had General Electric come to be in need of a government rescue during the Crash of 2008? For most of its history, the company was considered the bluest of blue chip firms, the last company that anybody would have expected to be in need of a rescue. Prior to the Crash of 2008, it enjoyed the highest possible score from the financial rating agencies. There was a problem, however: the rating was undeserved, perhaps the result of rating agency myopia, perhaps some behind-closed-door deal.

GE Capital, the company’s finance arm, was the fastest growing part of the company. By 2007, it contributed almost 40 percent of revenues and almost half of the profits. It generated these revenues and profits by using the company’s triple A financial rating to borrow money at rates even lower than paid by banks for short periods of time and then relending for longer periods to consumers, including sub-prime borrowers. This was a classic house of cards. It should have resulted in the company’s bankruptcy. But when, in September 2008, GE ran out of credit, and the survival of the company suddenly became doubtful, Immelt knew what to do.

The nation’s number one crony capitalist — Jeff Immelt of GE — jumped on the phone to [Treasury] Secretary Paulson and yelled “fire!” Soon the Fed and FDIC stopped the commercial-paper [short-term corporate debt] unwind dead in its track by essentially nationalizing the entire market. Even a cursory look at the data, however, shows that Immelt’s SOS call was a self-serving crock.

So in the fall of 2008, the US supposedly stood on the edge of an abyss, with a likely shutdown of the entire financial system, and a Depression from which we might never emerge. But this was actually just hyperbole, a way to scare President George W. Bush and members of Congress. No wonder the former said that “I’ve abandoned free market principles to save the free market system.” To say something so foolish in public in a television interview, he must have actually believed it.

Secretary Paulson is also alleged to have said, after receiving Immelt’s desperate call in September 2008, that he realized the crisis had now spread from Wall Street to Main Street. But he must have known that GE was, by that time, the very embodiment of Wall Street, despite being headquartered nearby in Connecticut. No doubt “helping Main Street” provided good cover for, among other things, saving Paulson’s Goldman Sachs.

By the time the Obama administration arrived, GE spent more money on lobbying than any other company. Immelt was asked first to join the President’s Economic Recovery Advisory Board and then, as we have noted, to chair the Council on Jobs and Competitiveness. When the administration’s Environmental Protection Agency (EPA) began enforcing new rules to reduce greenhouse gas emissions, the very first exemption was granted to a GE-powered facility, the Avenal Power Center in California.4 Meanwhile, GE built a part for General Motors’ electric car, the Chevy Volt, a favorite project of the administration that had been given hidden subsidies of as much as $250,000 per vehicle along with buyer tax credits.5 When that proved insufficient to get the car sold, the government bought thousands of Volts for its own fleet.

It was potentially embarrassing to the administration that GE outsourced so many jobs overseas. For example, when Congress outlawed old-fashioned incandescent light bulbs, partly at GE’s urging, manufacture of the new fluorescent bulbs was moved from GE’s light bulb plants in Ohio and Kentucky to China. Also potentially embarrassing, but little known, was that the fluorescents contained mercury, an environmental hazard, and that some of the Chinese workers had reportedly been poisoned by exposure to it.6 None of this, however, kept GE from benefiting, directly or indirectly, from what may have been billions in Stimulus Act grants.