The Future of the Commodity Price Boom 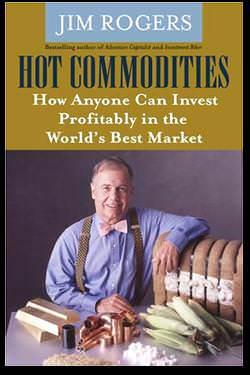 That forecast from The Economist turned out to be one of the worst in economic history — on a par with Irving Fisher's stock-market forecast in 1929 — because just a few weeks later the price of oil started a new upward trend. As this article is written, gold is trading at over $800 and oil at $95.

The question facing us is, will commodity prices continue to boom in the foreseeable future or are we at or near the end of the rising trend we've seen since 1999?

Jim Rogers, one of the world's most successful professional investors tries to answer this in his new book, Hot Commodities: How Anyone Can Invest Profitably in the World's Best Market, and as the title suggests his answer is that commodity prices will continue to rise.

Rogers is a bit biased on this issue as he manages a fund that invests in commodities, but that doesn't mean he's wrong. And as we shall see, Rogers present powerful arguments for believing in a continued boom; the main shortcoming of the book is that he overlooks another powerful argument for commodities.

Rogers, unlike many other professional investors, such as his former partner George Soros, is a libertarian, but many libertarians seem to believe that it is somehow unlibertarian to believe that commodity prices will rise. This goes back to the old feud between the late Julian Simon and Paul Ehrlich. Ehrlich has long advocated a Malthusian view that the world would run out of commodities and that draconian population control measures must be implemented to avoid a disaster. Simon on the other hand argued that a larger population was the solution, not the problem, and that increased mining, recycling, more efficient use of resources, and other forms of technical innovations would ensure that we would never run out of commodities, but have them in abundance.

Based on this belief, he publicly challenged Ehrlich to a bet where he would win if the prices of a number of commodities of Ehrlich's choosing were lower in 1990 than 1980. Simon won the bet, and this was taken by many as evidence that commodity prices were on a structural downward path, especially after adjusting for consumer price indexes. As Simon made this bet with a Malthusian, many now fear that rising commodity prices would somehow vindicate Malthusian advocates of government population control.

Within these cycles, there are corrections, as we saw when oil fell back from $78 per barrel in August 2006 to $50 in January 2007. And there will certainly be more corrections within this boom.

Why do commodity prices move up and down in such decade-long cycles? Rogers's answer is that, while commodity production and demand do in fact respond to price changes, there is a long time lag in most cases, particularly with regard to production.

There are many reasons for this. First, because commodity prices fluctuate so much, many producers want to wait and see if we're really on an upward path before investing. But far more importantly, particularly in the cases of mining and drilling for oil and natural gas, it takes quite a while to find new sources; to determine whether or not mining or drilling is really economically viable; to overcome red tape and objections from government bureaucrats and environmentalists; and then finally to go very deep into the ground and actually extract it. Any of these things can take a decade or more.

The response time is a lot faster when it comes to individual food commodities, as is illustrated by the sharp increase in corn production in response to the sharp increase in corn prices following US government subsidies of ethanol fuel produced with US corn. However, while this caused corn prices to fall back somewhat, the prices of other farm products, such as wheat, then soared as the land previously used to grow other grains was diverted to growing corn.

We can also see how the substitution effect makes the price increases in some commodities contagious. Rising oil prices caused increased interest in alternative sources of fuel, such as corn-based ethanol, which of course helps bid up corn prices. Rising corn prices diverts farm land to the production of corn instead of other grains, which in turn helps bid up the prices of these other grains. Rising oil prices increase demand for nuclear power, something that helps bid up the price of uranium.

Similarly, it often takes time for substitutes to respond to prices. It usually takes years to install more fuel-efficient cars, not to mention how long it takes to finish nuclear power plants and wind-power installations, overcome objections from government bureaucrats and politicians, as well as those of environmentalists and the people living next door to these energy production facilities.

Later, however, when all these new mines and oil wells are finally fully operational, and when the fuel-efficient cars and new energy plants are put in place widely, then the commodity-price boom ends — and turns into a commodity-price bust. When the lagged effect of all of these factors all finally show up, the effect could be a dramatically long period of overcapacity when new mining and drilling are simply not economically viable, while gas-guzzling cars are increasingly affordable. But as there are so many production facilities in place, and as the marginal cost of production for these existing facilities is relatively low, then this situation could continue for quite a while, causing long periods of declining commodity prices. Until, of course, the mines and wells get depleted. Then we face undercapacity, which of course will precipitate a new commodity-price boom.

Rogers argues that the current commodity price boom is in part a result of how the declining commodity prices of the 1980s and 1990s caused low levels of investment in mining and drilling, which means that existing mines and wells got depleted. In the book, Rogers reviews the supply-and-demand situation for a number of different commodities — including oil, natural gas, gold, lead, sugar, and coffee — and comes to the conclusion that supply is simply not growing as fast as demand, and won't do so for another few years, a period during which, therefore, the commodity-price rally will likely continue.

The other factor behind the commodity-price boom is the surge in demand from China and to a lesser extent India and the rest of Asia. Rogers is very bullish on China and argues that it is inevitable that China will become the world's dominant economic power. He devotes an entire chapter of the book to China, where he details the case for being bullish about China and also describes how the sharp increase in demand for commodities that comes with its continued industrialization and consumption will continue to push commodity prices upwards.

Rogers generally argues his case in a very persuasive, lucid, and instructive way, so my overall assessment of the book is very positive. My main complaint is not so much what is in it, but rather what has been left out. The key factor in analyzing commodity-price movements that Rogers has left out is the strong influence of monetary policy on commodity prices. This is particularly puzzling since Rogers is in fact an advocate of hard money and has repeatedly condemned Bernanke for debasing the dollar and refers to him as "a nut"2 for cutting interest rates so much.

While monetarists and most other non-Austrians believe that money-supply increases will affect all prices simultaneously and proportionally, a more realistic Austrian approach recognizes that some prices will be bid up faster and higher by any money supply increase. Which prices will be bid up the most and the soonest depends in part on who the early receivers of money are and also on how flexible the prices are. While commodity prices traded on the market change from minute to minute — or even second to second — and often rise or fall by several percent (or tens of percent) within a day and between the days, the prices of regular finished goods in supermarkets generally don't change very often. So as commodity prices are more flexible than the prices of regular finished goods, they, like stocks and bonds, can be expected to be affected more and faster by monetary trends than consumer prices will be.

There are also other reasons for believing monetary policy affects commodity prices disproportionately. If real interest rates fall, then the opportunity cost of holding commodities falls, making them more attractive. And if there is a fear that inflation could get out of hand, commodities could be viewed as being good inflation hedges.

Moreover, when the Fed inflates more than usual and lowers interest rates, this will drive down the foreign-exchange rate of the dollar, making commodities cheaper for foreigners, a factor that will help push up the dollar price of commodities.

While monetary policy isn't everything, and the fundamental nonmonetary supply-and-demand factors that Rogers mentions are certainly very important too, we can see several instances where monetary policies have had a decisive effect on commodity trends. A key reason why commodity prices fell so much in 1929–33 was certainly the contraction of the money supply during that period. And it was hardly a coincidence that commodity prices started to boom after Roosevelt took America off the gold standard in 1933 and continued to boom during the coming 20 years of wars and massive inflation. And the commodity price boom of the 1970s was certainly helped by the highly inflationary policies of Arthur Burns. Similarly, a major factor in breaking that commodity price boom was the significant tightening of monetary policy implemented by Paul Volcker.

Indeed, the massive boom in commodity prices following the Fed's rate cuts since August is another good example of the strong connection between monetary policy and commodity prices. Since mid-August, the Fed has lowered the discount rate 125 basis points and the federal funds rate by 75 basis points. The effect on commodity prices is very apparent, with the CRB Futures Index being up 15%, gold is up 20% and oil is up 35%.3

The Fed's likely continuation of its inflation in an attempt to solve the problems created by its previous inflation and the consequence that this will drive down the value of the dollar on foreign exchange markets will provide momentum for the commodity-price boom for some time. While Rogers's book is good, it would have been even better had it also mentioned that key point.