GET NEWS AND ARTICLES IN YOUR INBOXPrint
A
A
Home | Mises Library | Friedman for Government Intervention: The Case of the Great Depression

Friedman for Government Intervention: The Case of the Great Depression 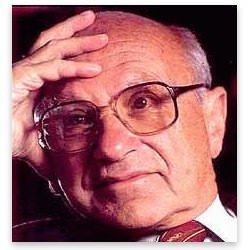 We've often heard that monetarists and Austrians agree that the government is to blame for the Great Depression. A deeper look shows that this is nothing but empty rhetoric.

This short article does not deal with the details of Austrian Business Cycle Theory and its opposite monetarist interpretation of events after 1929. The purpose is far less ambitious: to debunk the popular view that Milton Friedman proved that the Great Depression was not a market failure and that Friedman made a very strong argument against interventionism.

Milton Friedman viewed the 1920s as years of vital and sustainable growth in the economy. During this period the Federal Reserve notably expanded the money supply. This expansion was not reflected in an increase in the average price level, because monetary forces were neutralized by concurrent increases in productivity.

Friedman regards a stable price level as the sign of macroeconomic health. Indeed, everything seemed to go quite well until 1929. What began, in his view, as a typical trade cycle phase, became the Great Depression after a series of bad decisions by the Federal Reserve. According to Friedman, the sum of all those mistakes led to the collapse of the money supply by one third.

What should the Federal Reserve have done? Milton Friedman does not hesitate to provide the answer: keep the money supply growing. The Fed should have bought government bonds with money created out of thin air. And it should have started a program of "suspension of payments."

The latter seems very important. The collapse of money supply during the Great Depression was catalyzed by a chain of sovereign decisions of deposit owners to redeem their money. The structure of money supply is constructed as an inverted pyramid. On the top of it there is the money supply and credit given to businesses. At the bottom of it there is cash (and gold in the era of the Great Depression). If people decide to get their money back, bank runs ensue. This causes the whole pyramid to collapse, since its basis (people's access to instant cash) is being withdrawn.

Friedman claims that the Fed should have prevented people from withdrawing their money simply by "suspension of payments," instituting a "banking holiday," and by printing more money so that banks could have more reserves upon which they could still keep the money supply growing. This is nothing short of theft on a mass scale.

Despite the fact that the great Chicago economist proposed essentially a statist solution to the depression of 1929–33, the economic profession is under the impression that this his is somehow a "free-market" analysis. Even some Austrian economists, obviously differing from Friedman in their analysis of the Great Depression, have said that, despite difference with Austrians, at least Friedman portrayed this as a government failure, not a market failure.

It is true that Friedman, in his extensive and interesting investigation, concentrates on government decisions and policies. This, however, is not enough to make his perspective a free-market one.

Let us look closely at Friedman's argument. He says that the depression was caused not by the market, but by government's failure to intervene, failure to monetize the debt, failure to print the money, and failure to forbid bank runs. Thus a "market," as a social institution, is not responsible for a great economic collapse, but the government is. The contention is that the government failed to intervene. This is not a pro-market argument. In fact, any kind of a government intervention and statist delusion can be camouflaged in this way and efficiently sold to the public and intellectuals. All criticisms of the market, or demonstrations of "market failures" can be transformed into a "government failures" by blaming the government for not introducing policies aimed at private property.

Consider for example the following statements:

Using this analytical method, any socialist policy can be sold as pro-market! Consider this:

One can always make statements like "the government is to blame for X", but this statement alone is not enough to indicate whether the person is pro-market or anti-market. The proper way to spot pro-market solutions is to concentrate on the basis of a free market — property rights. It is just that simple, and this simplicity is often lost in the myriads of modern policy discussions.

Friedrich von Hayek, another great thinker in the twentieth century, was aware of this problem, which is why he did not like the phrase "laissez faire" (let the people act) or the idea that government should "not do anything." The phrase "not doing anything" is puzzling and may cover contradictory policies. Even from the anarcho-capitalist perspective, a modern state has a very important job to do. It should disappear from society, but still this is something that has to, in some sense, be "done."

If someone proposes strategies that undermine property rights, then those propositions should be considered anti-market. It does not matter whether you argue that something is not produced because of the "market failure" or because a government is not producing it. If you argue for violation of property rights, your position is contrary to the free market no matter what your position is on some current government actions.

His own idea for government violation of property rights was that more inflation of the money supply was needed, and that a legal blockade on bank runs should have been established (which should be understood as not allowing people to take their money on conditions specified in a deposit contract).

Friedman maintained that the policies of the Great Depression were a failure because they were not based on his own interventionist proposals: to inflate and undermine property contracts. From this perspective, the state failed not because it didn't "let the market work" but because it didn't let the Chicago bureaucrats work.

Finally, it should not surprise us to learn that, according to this interview, Friedman did in fact openly support the New Deal:

"The other part of the new deal policy was relief and recovery … providing relief for the unemployed, providing jobs for the unemployed, and motivating the economy to expand … an expansive monetary policy. Those parts of the New Deal I did support. (…) Because it was a very exceptional circumstance. We'd gotten into an extraordinarily difficult situation, unprecedented in the nation's history. You had millions of people out of work. Something had to be done; it was intolerable. And it was a case in which, unlike most cases, the short run deserved to dominate."

So much for Milton Friedman's famous opposition to interventionism.