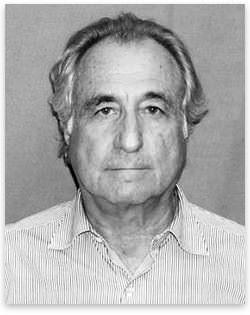 Bernie Madoff stole billions from the customers of his phony investment funds, running a racket rather than a financial service. People who aren't even his victims are furious, and nearly everyone enjoyed a 10-minute sense of vengeance when the judge threw him behind bars for 150 years.

Let me weigh in with a contrary view. Free Bernie Madoff, I say.

His life is already ruined. He is a pauper. He will never again do business. From the innovative genius whose information technology in the 1960s became the basis of NASDAQ, he rose to the heights and fell to the depths where he will stay this way until death. He won't be able to be seen in public for the rest of his life without encountering scorn and derision from everyone around him.

Maybe the idea of jail is punishment. I don't see how it can be a worse punishment than he would face on the outside.

Maybe the idea is to impose on him a feeling of remorse. But does he not already feel regret, even deep sorrow? This man who was widely considered to be a historic phenom is now disgraced, forever. We all have one life to live, and his is now a complete wreck, going down in history as the worst financial criminal of all time.

What, then, precisely, is the point of jailing him? He is no direct threat to anyone. Society would not be safer because he is in the slammer. He is not going to rob people or beat people up. He might write a book and donate the funds to charity or make some restitution to his victims. I, for one, would like to read that book.

Instead, taxpayers will be forced to pick up the tab for his living expenses. Victims get nothing. That's not justice. That's inhumane for both sides of the transaction: Bernie and us.

Will jail "rehabilitate" him? It's ridiculous. His rehabilitation, if there can be one, is probably already complete. Consider the dilemma in which he found himself. It began small, a simple scheme that anyone can play. His problem was that it worked better than most.

Once his scam began, he probably hoped the markets would turn around and he would become honest again. It didn't turn out that way. Then he couldn't dig his way out of it, no matter how much he hated his life. That it lasted decades instead of days is a testament to his marketing savvy, but that's not to say that he loved his life. Spending the rest of his life in the pokey won't rehabilitate him any more intensely than life on the outside.

The problem with prisoners is not that you are treated like an animal. Would that they had it so good! At the zoo, the animals are fed and groomed and cared for. They have value because they elicit affection from paying customers. Even slaves are in a better position, for at least they are valued to some small degree by their masters.

Prisoners, on the other hand, face a kind of metaphysical transformation. They go from being valued members of society to being treated like blobs of flesh taking up space. Their wardens see them as objects. They are abused by fellow inmates and live in a state of incredible degradation everyday.

All prisoners are therefore living amidst a kind of torture. It isn't modern. It isn't even medieval. It is contrary to all principles of civilization. Perhaps we should allow it for the most violent members of society, pending some other solution. But that doesn't apply to Madoff, and it doesn't apply to some ¾ of all the prison population.

But still, we are all supposed to feel some kind of joy at his captivity. For decades we've been told by sociologists that the real criminals in society are not muggers and murderers and rapists but rather "white-collars criminals" who are capitalists sneakily stealing money using fancy finance. They are the ones who should be in jail.

And so now, those educated by the sociologists, forever soft on real crime but oddly tough on financial crime, have their way, as the bourgeoisie cries out for vengeance against a guy whose sole victims were the rich people who were his own customers. Can there be anyone doubt that Madoff has been set up as a scapegoat, a person on which to blame the downturn so that we will be distracted from the greatest scams of all that enjoy the cover of law?

So let us ask the unaskable: Just how unusually evil were Madoff's actions? Not that unusual. In fact, the whole notion of paying off past investors with the funds of present investors is at the very core of the Social Security system. At least Madoff sought the consent of his investors who let him care for their money based on their own volition. And at least he didn't attempt to defend himself with the claim that he was conducting wise public policy.