The Folly of Forecasting 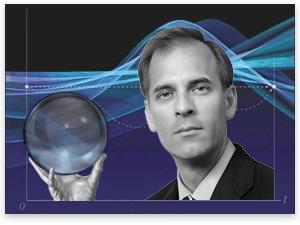 President Obama's mostly forgotten jobs package would reportedly create 1.9 million new jobs, a one-percentage-point drop in the unemployment rate, and goose GDP by two percentage points. That was the prediction of Mark Zandi, chief economist of Moody's Analytics. You see, he has a model. He did a simulation, and presto — 1.9 million jobs!

Zandi practices what one of my undergraduate economics professors told our class: "Predict often. That way, when you occasionally get lucky, you can take credit for it."

But the Moody's man is on a cold streak. Zandi has predicted the bottom of the housing market every year since 2006. And QE after QE was supposed to right the good ship USS Economy.

Zandi and Alan Blinder figure the 2009 fiscal stimulus created 2.7 million jobs and added $460 billion to gross domestic product. Unemployment would be 11 percent today if the stimulus hadn't been passed and 16.5 percent if neither the fiscal stimulus nor the banks' rescue had been enacted, according to Zandi and Blinder. "It's pretty hard to deny that it had a measurable impact," Zandi said.

What must be hard for Zandi is deciding what numbers he will pull out of the air to make such preposterous statements.

But math is the modern economist's stock in trade. Anyone wanting to be a PhD economist must endure semester after semester of high-level math. The late Larry Sechrest wrote that at the University of Texas Arlington,

There were four semesters of econometrics and two semesters of mathematical economics. Moreover, virtually every class in the Ph.D. program required that the student write an econometrically based term paper.

A student needs that entire math training to build robust models that will produce quality predictions similar to those produced by those at the top of the profession, like Mr. Zandi.

because of the pervading epistemology of positivism. Positivism is essentially an interpretation of the methodology of physics ballooned into a general theory of knowledge for all fields.

Physics is believed to be a real science, Rothbard continues, while

the "social sciences" are backward because they cannot measure, predict exactly, etc. Therefore, they must adopt the method of physics in order to become successful. And one of the keystones of physics, of course, is the use of mathematics.

But now physics, which is good at predicting the movements of unmotivated particles, is itself being turned upside down.

Einstein's theory of relativity claims that nothing can match the speed of light — until a couple of weeks ago in an underground laboratory in Gran Sasso, Italy. Neutrinos fired 454 miles from a super collider just outside Geneva reached the lab 60 nanoseconds faster than light.

Charles Krauthammer writes that the Gran Sasso scientists immediately put out the call for others physicists to replicate the experiment:

This is not a couple of guys in a garage peddling cold fusion. This is no crank wheeling a perpetual motion machine into the patent office. These are the best researchers in the world using the finest measuring instruments, having subjected their data to the highest levels of scrutiny, including six months of cross-checking by 160 scientists from 11 countries.

Just imagine, if Einstein's relativity — a theory on which all of physics has been built for a century — is upended! Well, a long series of theoretical dominoes get tripped. Krauthammer mentions astronomy and cosmology. But, what happens to the whole mathematical edifice that the current economics profession rests on? How will the Mark Zandis of the world offer predictions with a straight face?

Incredibly, Rothbard foresaw the prospect of speedy neutrinos many years ago:

As much as we may progress in the knowledge of the laws of physics, our knowledge is never absolute, since the laws may always be revised by more general laws and through further empirical testing.

In economics, Rothbard explains, we know that human action is motivated, while the "behavior" of stones is not. "Therefore, we may build economics on the basis of axioms — such as the existence of human action and the logical implications of action — which are originally known as true."

While from these axioms, laws can be deduced as true, there are no "facts" in human action that can be tested. Rothbard explains that mathematics is useful in physics "because of the axioms themselves, and the laws deduced from them, are unknown and in fact meaningless."

While cause is known in economics — human action using means to achieve ends — cause in physics tends to, in Rothbard's words, be "fragile." He explains that positivists replace cause with mutual determination, with mathematical equations suited for depicting "a state of mutual determination of factors, rather than singly determined cause and effect relations."

To judge the value of mathematical economics one must assess the assumptions embedded into the myriad of equations that these mainstream prognosticators manipulate to produce their forecasts.

Invariably these assumptions "are few in number, simple, and wrong," writes Rothbard.

In his 1974 Nobel Prize acceptance speech, entitled "The Pretense of Knowledge," F.A. Hayek said that monetary and fiscal policies like those championed by Mr. Zandi are the product of what he called the "scientistic attitude," but in fact is unscientific in that it "involves a mechanical and uncritical application of habits of thought to fields different from those in which they have been formed."

Mises wrote in Human Action, "There is no such thing as quantitative economics" and unlike the particles in physics lab, Hayek believed,

such complex phenomena as the market, which depend on the actions of many individuals, all the circumstances which will determine the outcome of a process … will hardly ever be fully known or measurable.

So neutrinos or no neutrinos, the mathematical games economists play are just so much flapdoodle being dished out to an eager audience of those craving to know the future. The future is uncertain, except for knowing that government interventions, based on some economist's modeling, will make matters worse.