The Fiasco of Fiat Money 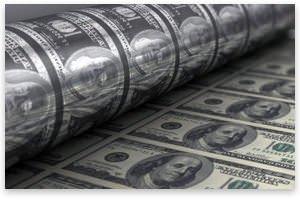 Today's worldwide paper-, or "fiat-," money regime is an economically and socially destructive scheme — with far-reaching and seriously harmful economic and societal consequences, effects that extend beyond what most people would imagine.

Fiat money is inflationary; it benefits a few at the expense of many others; it causes boom-and-bust cycles; it leads to overindebtedness; it corrupts society's morals; and it will ultimately end in a depression on a grand scale.

All these insights, however, which have been put forward by the scholars of the Austrian School of economics years ago, hardly play any role among the efforts of mainstream economists, central banks, politicians, or bureaucrats in identifying the root cause of the current financial and economic crisis and, against this backdrop, formulating proper remedies.

This should not come as a surprise, though. For the (intentional or unintentional) purpose of policy makers and their influential "experts" — who serve as opinion molders — is to keep the fiat-money regime going, whatever it takes.

In The Mystery of Banking, Murray N. Rothbard uncovers the fiat-money regime — with central banking and fractional-reserve banking — as a form of embezzlement, a scheme of thievery.1

Rothbard's conclusion might need some explanation, given that mainstream economists consider the concept of fiat money as an economically and politically desirable, acceptable, and state-of-the-art institution.

An understanding of the nature and consequences of a fiat-money regime must start with an appreciation of what money actually is and what it does in a monetary exchange economy.

Money is the universally accepted means of exchange. Ludwig von Mises emphasized that money has just one function: the means-of-exchange function; all other functions typically ascribed to money are simply subfunctions of money's exchange function.2

With money being the medium of exchange, a rise in the money stock does not, and cannot, confer a social benefit. All it does is reduce, and necessarily so, the purchasing power of a money unit — compared to a situation in which the money stock had remained unchanged.

Those who are willing to disrespect the principles of the free market (that is, the unconditional respect of private property) will want to obtain full control over money production (that is, holding the money production monopoly).

Once people have been made to think that the state (the territorial monopolist of ultimate decision making with the right to tax) is a well-meaning and indispensible agent, money production will sooner or later be monopolized by the state.

The (admittedly rather lengthy) process through which government obtains the monopoly of money production has been theoretically laid out by Rothbard in What Has Government Done to Our Money?3

Having obtained the monopoly of money production, government will replace commodity money (in the form of, say, gold and silver) with fiat money, and the regime of legalized counterfeiting gets started.

Commercial banks will press for fractional-reserve banking, meaning that they should be legally allowed to issue new money (fiduciary media) through credit extension in excess of the reserves they obtain from their clients. Fractional-reserve banking is a rather attractive profit-making scheme for lenders; and it provides government with cheap credit for financing its handouts (well) in excess of regular tax receipts.

Fiat money will be injected through bank-circulation credit: banks extend credit and issue new money balances which are not backed by real savings. Economically speaking, this is worse than counterfeiting money.

Fiat money is not only inflationary, thereby causing all the economic and societal evils of eroding the purchasing power of money and leading to a non-free-market related redistribution of income and wealth among the people; banks' circulation credit expansion also artificially lowers the market interest rate to below the rate that would prevail had the credit and fiat-money supply not been artificially raised, thereby making debt financing unduly attractive, especially for government.

It is the artificial lowering of the market interest rate that also induces an artificial boom, which leads to overconsumption and malinvestment, and which must ultimately end in a bust. Mises put it succinctly:

As a result, the rise in the money stock does not show up in a change in overall prices of goods and services (while it goes unnoticed that prices would have declined had there be no fiat-money expansion).

If, however, people's demand for fiat money declines relative to the supply of fiat money, the system gets into trouble, for then a rise in the fiat-money supply will show up in price increases — be it consumer or asset prices.

Rising prices, in turn, especially when it comes to accelerating prices increases, bring fiat money's hitherto rather subtle redistribution of income and wealth to the surface. Once people start realizing that fiat money is inflationary, the demand for fiat money starts declining.

If people expect ever-greater increases in the fiat-money supply going forward (without any limit, so to speak), the demand for fiat money falls (drastically) or even collapses altogether. This is what triggers a crack-up boom, as Mises called it.5

People desperately exchange fiat money against other vendible items, bidding up the money prices of goods and services, thereby setting into motion a downward spiral, leading to ever-greater losses of the purchasing power of fiat money.

In such an extreme scenario, fiat money can actually become completely destroyed. This is what occurred in the 1923 German hyperinflation, when government issued ever-greater amounts of money, and eventually no one accepted the Reichsmark as money any longer.

Especially in the field of monetary economics, government-favoring economists take great effort to convince people of the advantages of the fiat-money regime, painting the fiat-money regime — and thus central banking and fractional-reserve banking — in the brightest colors.

What is more, people must be made to think that they benefit from fiat money, that there is actually no alternative to a government-sponsored fiat-money regime, and that abandoning fiat money and replacing it with commodity money would be economically disastrous.

This is because a fiat-money regime allows government to expand strongly, thereby corrupting an ever-greater number of people: people seek (allegedly prestigious) jobs, generous handouts, and business opportunities offered by government. People increasingly team up with government, making their personal career and business success dependent on an expanding government apparatus. And many people even start investing their lifetime savings in fiat-denominated "secure" government bonds.

As a result, sooner or later a government default becomes a no-go. In times of crisis, the printing of ever-greater amounts of money for shoring up government finances (and the finances of government beneficiaries) will be cast as the policy of the least evil.

To the great number of those who have become dependent on the government apparatus, printing money to finance government's empty coffers will be seen as preferable to letting financially overstretched public sectors and banks go bankrupt.

The incentive structure provoked by fiat money therefore works toward pushing the system beyond its limit. In other words, fiat money will go through high inflation — even hyperinflation — first before a depression unfolds.

A fiat-money regime cannot be upheld indefinitely, though, because it erodes — via ever-greater government interventionism — the very pillar on which the free market system rests: private property.

Mises put it as follows:

It would be a mistake to assume that the modern organization of exchange is bound to continue to exist. It carries within itself the germ of its own destruction; the development of the fiduciary medium must necessarily lead to its breakdown.7

The erosion of the free-market system, in turn, entails a decline of the economy's production capacity, thereby making it increasingly impossible for debtors to service their liabilities, thereby increasing the incentive for running the printing press.

As the Austrian economists have shown, however, there is no escape from the disastrous economic consequences caused by fiat money; high inflation, or hyperinflation, wouldn't do the "trick." In fact, it would make ensuing depression even worse.

The sooner the fiat-money boom is brought to a halt, the lower will be the costs of the ensuing depression — a reasoning already expressed by the Prussian philosopher Immanuel Kant (1724–1804), who noted in his Prolegomena (1783), "It is never too late to become wise; but if the change comes late, there is always more difficulty in starting a reform."8