The Fed Obliterates the Savings Ethic

Depression babies learned early that "saving for a rainy day" was not something one hopes to do but a requirement. The saying originated when most people worked on the farm. And when it rained, the fields were too wet to plow, and the farmer — not to mention the hired hands — made no money.

Of course, my grandfather was the diligent sort who would use rainy days to do required maintenance on his implements, noting with derision other farmers who spent rainy days at the bar in town. He believed they would surely end up with broken equipment when the sun would reappear, keeping them from making hay.

So the idea of savings is not necessarily the return one receives on the money that's socked away, but the piece of mind that, when the weather doesn't cooperate, the saver has a little stash to tide him over. Of course, the vast majority of us don't have to worry about the weather.

But an economic storm hit a couple years ago and plenty of people have not had work, rain or shine. Those who took heed of that old saw have no doubt weathered the storm better than those who didn't. Most financial advisors recommend that a person have three month's worth of living expenses saved — and some say six months worth, just in case. But how many people heed that advice?

There is no caveat to the counsel that says, "Keep six months of savings around if the money is earning at least six percent." Even if the money sits there all shiny, not earning a thing, it's the liquidity and insurance against the unknown that's the issue.

Unfortunately, a central bank's debauchery of the currency serves to raise people's time preferences and impair their judgment. In a blog post recently, I highlighted the advice of life coach and author John P. Strelecky, who advises people to spend their tax refunds on an experience they will remember forever, rather than saving the few hundred or thousand dollars that the IRS may be giving back.

Live your life for today, says the life coach — a couple thousand bucks isn't going to matter anyway. I posted to the Mises Blog to point out how ludicrous this advice is. But most who commented sided with Strelecky:

I think his advice is spot-on, at least given the constraints of the times in which we live. What's the point in saving if inflation will ravage whatever you manage to accumulate?

You play by the rules of the game. Your savings growth will be puny due to pathetic interest rates, erased by inflation, and confiscated by a rapacious state. So go ahead, enjoy the "money" now, while it still has some value.

Most people don't really have a better place to put the money than into a pleasurable experience, which is all you will want in the end.

Gotta agree with the comments. Maybe not trips or other "experiences." But I feel safer with stuff than I do with Federal Reserve notes going forward.

That's just what central bankers like to hear. They are worried about deflation. A few months ago, the Chicago Fed's Charles Evans said,

It seems to me if we could somehow get lower real interest rates so that the amount of excess savings that is taking place relative to investment is lowered, that would be one channel for stimulating the economy.

Lord Keynes was constantly worried that people were saving too much and consuming too little — thus the need for more and cheaper money to stimulate the economy. Mr. Bernanke is nothing if not a good Keynesian, and his low rates make even the savviest question whether to forgo consumption. 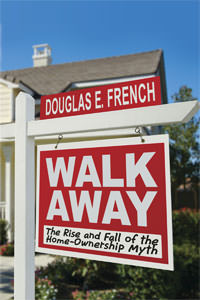 And likely no retiree, when contemplating leaving the workforce, figured 1 percent interest rates (or less) into their retirement cash-flow planning. In a front-page article, the Wall Street Journal took a look at "retirees who find themselves on the wrong end of the Federal Reserve's epic attempt to rescue the economy with cheap money."

The WSJ rightly points out that the Fed's low rates have been a windfall for banks and borrowers, but a problem for those needing income from their savings to live on. People who thought they played the game right, worked hard, saved money, and now want to take it easy, are panicked that money-market funds are throwing off but 24 basis points. "That's one-tenth the level of late 2007 and the lowest on records dating back to 1959," the Journal reports.

As bad as the Fed-engineered low rates are for those trying to live off past savings, reporter Mark Whitehouse makes the point that the low rates keep young people from building up funds for the future — whether it's for emergencies or retirement. Working Americans put less money into financial assets last year than at anytime on record — except 2009, when people pulled money out. And while the Department of Commerce says the personal savings rate has risen to 5.8 percent, Whitehouse explains, "That's in large part because it counts reductions in personal debt, such as mortgages and credit-card balances, as savings." But most debt reduction, Whitehouse writes, has been driven by defaults, rather than saving.

The Fed's interest-rate policy also leads people into taking more risk with their savings than they should. "That's why most of us are in the stock market, because there's no place else to go," says 70-year-old John Lehman, who would rather have his money in bank certificates of deposit but must resort to speculating. "I hope my assets don't run out before I die."

Many retire with next to nothing as it is. According to AARP, 16 percent of Americans have not saved a dime for retirement, and nearly half have saved less than $50,000.

Those with no savings are more dependent on government and others when the unexpected occurs, whether it's job loss or the washing machine quits. Professor Paul Cantor reminds us in his article, "Hyperinflation and Hyperreality: Mann's 'Disorder and Early Sorrow,'" that "money is a central source of stability, continuity, and coherence in any community. Hence to tamper with the basic money supply is to tamper with a community's sense of value."

When the Fed makes saving seem futile and immediate pleasure seem rational, the world has been diabolically turned upside down. Just one step away from hyperinflation, the central banks' actions are threatening "to undermine and dissolve all sense of value in a society."

"Thus inflation serves to heighten the already frantic pace of modern life, further disorienting people and undermining whatever sense of stability they may still have," Cantor explains.

The social order is upended in Mann's story as wealth is transferred from those who diligently saved all of their lives to speculators. As it was in the Weimar Germany that Mann describes, so it is today, as people believe it futile to sock away a little money here and there, and instead feel compelled to either speculate or just blow what they have on good times.

And while the retirees mentioned in the WSJ article are being crippled financially, Cantor points out that Mann's portrayal of hyperinflation uncovers "something psychologically more debilitating happening to the older generation." Impetuous, high-time-preference behavior displayed by the young appears rational in an inflationary period, while prudence and conservatism appear to be not even quaint but downright silly.

As Mann described so long ago, the world of inflation is the illusion of wealth, created by the government's printing press, distorting everything we see and perverting our judgment. Meanwhile the cry for stimulus continues, while our culture and values are buried under a pile of paper.