The Fed and the “Salvador Dali Effect” 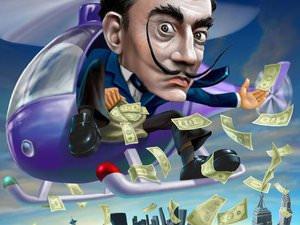 There is a story about the great Catalan surrealist painter Salvador Dali. It is said that in the last years of his life, when he was already famous, he signed checks knowing that they would not be submitted to the bank for payment. Rather, after partying with his friends and consuming the most expensive items the restaurants had to offer, he would ask for the bill, pull out one of his checks, write the amount, and sign it. Before handing over the check, he quickly turned it around, made a drawing on the back and autographed it. Dali knew the owner of the restaurant would not cash the check but keep it,put it in a frame, and display it in the most prominent place in the restaurant: “An original Dali.”

It was a good deal for Dali: his checks never came back to the bank to be cashed, and he still enjoyed great banquets with all of his friends. Dali had a magic checkbook.

But what would have happened if one day art collectors concluded that Dali’s work really did not capture the essence of surrealism, and therefore that his art was not of great value? If that had happened, every autographed check would have come back to the bank (at least in theory), and Dali would have had to pay up. If Dali had not saved enough money, he would have had to find a job painting houses.

While the analogy is not perfect, we may find that something similar can happen with the Fed and the dollar. For now, The Fed has a magic checkbook that allows it to spend without paying the bill because it thinks the checks will never come back to be cashed.

Dali died long before people stopped valuing his art, but the US economy does not enjoy such a convenient escape. What if, as in the case of art collectors who might no longer see great value in Dali's work, the world loses faith in the quality of the dollar and stops using it for large international transactions? If that happens, in the same way Dali would have had to pay his bills, the US would also have to make good on the checks it signed. Would the US be able to pay its checks with more checks?

Since each country has its own currency, every central bank around the world has to print more of its national currency to buy the excess of dollars entering the country whenever the US expands its money supply. Thus, in the 1970s, in the wake of the Nixon Shock, members of OPEC accused the US of exporting inflation.

Recall that during the mid-1960s, the US central bank was financing a war in Vietnam and as well as funding Lyndon B. Johnson’s programs of “The Great Society”that supposedly would eliminate poverty. As the Fed was printing money, OPEC members had to inflate their currencies to buy the excess of dollars.

Central banks around the world have to buy excess of dollars entering their countries so their exports do not lose competitiveness. Thus, a double inflation is imposed on every country in the world, one created by its own domestic central bank, because all central banks inflate on their own, and another created by the US central bank. Hans-Hermann Hoppe wrote about the perils of monetary imperialism:

The dominating state will use its superior power to enforce a policy of internationally coordinated inflation. Its own central bank sets the pace in the process of counterfeiting, and the central banks of the dominated states are ordered to use its currency as their own reserves and inflate on top of them. Thus, along with the dominating state and as the earliest receivers of the counterfeit reserve currency, its associated banking and business establishment can engage in an almost costless expropriation of foreign property owners and income producers. A double layer of exploitation of a foreign state and a foreign elite on top of a national state and elite is imposed on the exploited class in the dominated territories, causing prolonged economic dependency on and relative economic stagnation in comparison with the dominant nation. It is this — very uncapitalist — situation that characterizes the status of the United States and the US dollar and that gives rise to the — correct — accusations concerning US economic exploitation and dollar imperialism.1

While it is true that in the 1970s the dollar enjoyed a worldwide hegemony — given that all European countries had their currencies separated, and given that China and Russia were outside the capitalist world — now the situation is different. Vladimir Putin recently stated that “The international monetary system itself depends a lot on the U.S. dollar, or, to be precise, on the monetary and financial policy of the U.S. authorities. The BRICS countries (Brazil, Russia, India, China and South Africa) want to change this.”2

Salvador Dali had devised an ingenious method for not paying his bills. Similar stories are told about Pablo Picasso. But the Fed does not produce tangible items that people would rather hold on to, like an original Salvador Dali. The Fed does not produce work or items of value. The Salvador Dali effect, i.e., the ability to prevent checks from being cashed by creating something of real value, does not apply to the Fed. That is why it is good to remind the Fed, and the government, to be careful with the expenditures when partying, just in case the magic checkbook disappears.

Dante Bayona received his master’s degree in Austrian economics under the direction of Jesús Huerta de Soto in Spain. He was a 2014 Summer Fellow at the Mises Institute, works in the banking sector in New York, and collaborates with MisesHispano.org.