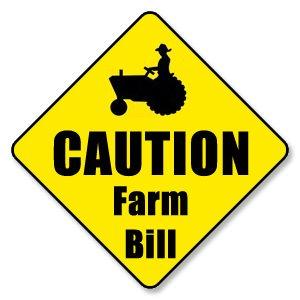 Family farms are very similar to mom-and-pop grocery stores or general stores or butcher shops. Those shops used to dot the landscape in towns all across America. Before the age of efficient transportation and refrigeration, computers, and advanced technology, prices were relatively high, and local family-owned stores could make an adequate profit. Those high prices that gave the small shops the ability to thrive, however, were the same high prices that burdened every other family in the economy and kept standards of living relatively low.

As technology advanced and productivity increased, prices declined. With better transportation and preservation methods, economies of scale brought about the rise of large stores and reduced costs. The new stores were able to be profitable while offering low prices and a bewildering variety of different products.

Small local stores couldn't compete with this and, with few exceptions, mom-and-pop grocery and general stores are artifacts of bygone times. Is that good or bad? For the local storeowner it was very bad. For the consuming public, however, it was very good. Even low-income people now have access to a wide variety of food and many other products at a very low relative cost.

Family farmers have been subject to much the same pressures as family shops. Advances in crops, methods, machines and other technology produced a situation where fewer farmers were needed to feed the population. Farm prices should decline as productivity increases, as would be expected in every industry, in every time. In the farm business, however, something odd happened as this little piggy went to market.

In the 1930s, legislation was enacted to alter the inevitable economic consequences of progress. Politicians wanted to help poor farmers who were being squeezed by the increase in productivity and fall in prices. A whole raft of measures was concocted to keep farm prices high. The correct understanding was that, if supply can be artificially restricted, prices would be propped up. The various methods included the destruction of massive quantities of crops and millions of head of livestock. While it effectively reduced the supply, it was kind of embarrassing for the government to be seen destroying good food at a time when millions of people were starving in the Great Depression.

The alternate method of enforcing restrictions on amounts a farmer could produce was emphasized. Millions of acres of crops were plowed under. The government also paid farmers not to plant crops, and bought millions of tons of commodities to keep them off the market.

The various efforts did bear fruit. Supplies were limited, and prices were maintained at levels significantly above the market level. Hooray for the wise leaders in Washington. They were successful in forcing up prices for food, clothing and other necessities for the millions of unemployed workers and their families languishing in the dark years of the 1930s. Not only were prices artificially high, but the vast amounts paid to farmers not to produce had to be collected in federal taxes — a double whack.

Fast forward to 2007. The legacy of the 1930s still haunts us. Under the Farm Bill and other legislation, huge quantities of government purchased commodities still distort markets, billions of dollars spent on subsidies still have to be collected from real people, and higher prices for agricultural goods still hurt consumers.

There is an easy and quick solution, however politically unpalatable it may be. Congress should quit the subsidy and support of farms. Just as mom-and-pop groceries disappeared because they were inefficient high-cost operations, inefficient farms should be allowed to follow suit. That is what happens with inefficient auto mechanics, plumbers, homebuilders, or any other field of endeavor. In a free market, efficient operators will easily earn a profit as supply equalizes with demand, something not seen in many decades of intervention.

A farm is a business, nothing more, nothing less.

I would like for everyone to succeed, but any business that cannot succeed without government support is unsound. It needs to change, to improve, to become more efficient, or get out of the business. Government support of inefficient producers in any industry only makes it more difficult for those who are efficient and trying to do it right. It also encourages special interests to fight for their share of the loot from the shakedown of taxpayers. See the web site for California Certified Organic Growers, "Organic Farmers Demand Their Share!"

The current Farm Bill is this year's version of the same old laws that hurt consumers and take money from my pocket and yours to subsidize an industry that is now dominated by massive agribusinesses that don't have a stitch of concern about family farmers. While there is a lot of rhetoric in the official propaganda about improving the bill, the basic foundation is built on quicksand, and no amount of reform will help it. It is enlightening to visit the USDA website (America's Farm Bill) and read what the vested interests are saying in support of it.

Mom-and-pops in any industry earn my respect. The owners are generally hard working, diligent people — entrepreneurs with initiative to make their own way. If they cannot make a profit, however, they need to turn to a career where they can be more productive. Turning to government for protection and support is stealing money from the pockets of everyone else. Farm programs, including the 2007 Farm Bill, need to be thrown in the dust bin of history, where they belonged eighty years ago.