The Fall of Communism in Massachusetts 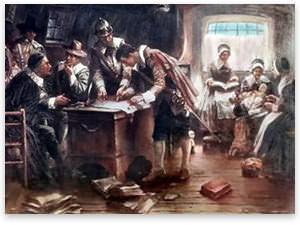 The Pilgrims formed a partnership in a joint-stock company with a group of London merchants, including Thomas Weston, an ironmonger, and John Peirce, a cloth maker. The company, John Peirce and Associates, received in 1620 a grant from the Virginia Company for a particular plantation in Virginia territory. In this alliance, each adult settler was granted a share in the joint-stock company, and each investment of ten pounds also received a share. At the end of seven years, the accumulated earnings were to be divided among the shareholders. Until that division, as in the original Virginia settlement, the company decreed a communistic system of production, with each settler contributing his all to the common store and each drawing his needs from it — again, a system of from each according to his ability, to each according to his needs.

In mid-December 1620 the Mayflower landed at Plymouth. In a duplication of the terrible hardships of the first Virginia settlers, half of the colonists were dead by the end of the first winter. In mid-1621 John Peirce and Associates obtained a patent from the Council for New England, granting the company 100 acres of land for each settler and 1,500 acres compulsorily reserved for public use. In return, the Council was to receive a yearly quitrent of two shillings per 100 acres.

A major reason for the persistent hardships, for the "starving time," in Plymouth as before in Jamestown, was the communism imposed by the company. Finally, in order to survive, the colony in 1623 permitted each family to cultivate a small private plot of land for their individual use. William Bradford, who had become governor of Plymouth in 1621, and was to help rule the colony for 30 years thereafter, eloquently describes the result in his record of the colony:

All this while no supply was heard of.… So they began to think how they might raise as much corn as they could, and obtain a better crop than they had done, that they might not still thus languish in misery. At length … the Governor (with the advice of the chiefest among them) gave way that they should set corn every man for his own particular, and in that regard trust to themselves.… And so assigned to every family a parcel of land … for that end, only for present use.… This had very good success, for it made all hands very industrious, so as much more corn was planted than otherwise would have been by any means the Governor or any other could use, and saved him a great deal of trouble, and gave far better content. The women now went willingly into the field, and took their little ones with them to set corn; which before would allege weakness and inability; whom to have compelled would have been thought great tyranny and oppression.

The experience that was had in this common course and condition, tried sundry years and that amongst godly and sober men, may well evince the vanity of that conceit of Plato's … that the taking away of property and bringing community into a commonwealth would make them happy and flourishing.… For this community … was found to breed much confusion and discontent and retard much employment that would have been to their benefit and comfort. For the young men, that were most able and fit for labour and service, did repine that they should spend their time and strength to work for other men's wives and children without any recompense. The strong … had no more in division of victuals and clothes than he that was weak and not able to do a quarter the other could; this was thought injustice.… Upon … all being to have alike, and all to do alike, they thought … one as good as another, and so … did … work diminish … the mutual respects that should be preserved amongst men.… Let none object this is men's corruption … all men have this corruption in them.…1

The antipathy of communism to the nature of man here receives eloquent testimony from a governor scarcely biased a priori in favor of individualism.

In 1627 the inherent conflict between colony and company in Plymouth was finally resolved, by the elimination of the company from the scene. In that year, the seven years of enforced communism by the company expired, and all the assets and lands were distributed to the individual shareholders. Grants of land were received in proportion to the size of the stock, so that the larger shareholders received larger gifts of land. This complete replacement of communism by individualism greatly benefited the productivity of the colony. Furthermore, the colonists took the happy occasion to buy up the shares of the Peirce company. Plymouth was now a totally self-governing colony. By 1633 the entire purchase price had been paid and the colonists were freed from the last remnant of company, or indeed of any English, control.

This article is excerpted from Conceived in Liberty (1975), chapters 17 and 18.
Author: