The Failure of Global Liberal Hegemony 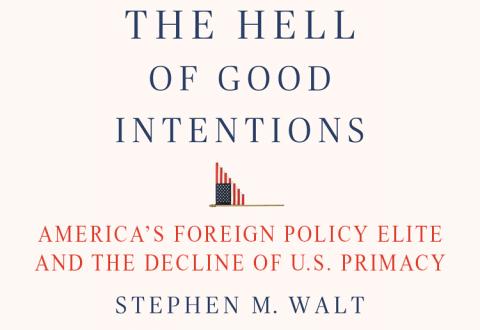 Stephen Walt has put himself in a difficult position. He is a Professor of International Affairs at the Kennedy School of Government at Harvard and the author of studies, most notably The Origins of Alliances, which have won him influence in what he calls the “foreign policy establishment.” He says, “I have been part of that community for much of my professional life.” At the same time, he acknowledges, “I am surely something of an outlier within that world.”

That is decidedly an understatement, and this leads to Walt’s difficult position. Despite his impeccable credentials as a foreign policy “insider,” much of The Hell of Good Intentions consists of a fierce assault on most of his fellow members of the establishment. “To put it in the bluntest terms, instead of being a disciplined body of professionals constrained by a well-informed public and forced by necessity to set priorities and hold themselves accountable, today’s foreign policy elite is a dysfunctional caste of privileged insiders who are frequently disdainful of alternative perspectives and insulated both professionally and personally from the consequences of the policies they promote. It was impolitic for the deputy national security advisor Ben Rhodes to dismiss this community as ‘the Blob,’ but the label nonetheless contains important elements of truth.”

According to Walt, the views of the Blob have led America to disaster. After the collapse of the Soviet Union and the end of the Cold War, the United States stood supreme in the world. “When the Cold War ended, the United States found itself in a position of global primacy unseen since the Roman Empire. It had the world’s largest and most advanced economy. ... The United States was also the only country in the world with a global military presence. ... Moreover, the United States was on good terms with all the other major powers ... relations with Russia were surprisingly cordial as the unipolar era began, as Moscow wanted Western help to transition to a market economy and was eager to forge cooperative security arrangements as well.”

Given this favorable position, the rational course of action was clear. America should have withdrawn from its global commitments. No threat faced us: why, then, did we need to police the world? Nevertheless, American commitments were maintained and extended. Walt holds that this was not done to protect America but rather, to a large extent, for reasons of ideology: “Most important, U.S. leaders did not seek primacy in order to protect the American homeland from invasion or attack. Rather, they sought it in order to promote a liberal order abroad. Bill Clinton and Barack Obama used military force more cautiously and discretely than George W. Bush did, but all three post-Cold War presidents saw U.S. military power as an invaluable tool for advancing an ambitious global agenda.”

The pursuit of liberal hegemony rests on faulty theory and has led to bad results. The supporters of liberal hegemony thought that a liberal world order was self-evidently desirable and that America had the power to impose it on nations that dared to resist: “If other states balked, U.S. policymakers were convinced that the United States had the tools to force them to comply. It could impose economic sanctions, give aid to a hostile regime’s foreign or domestic opponents, undermine rivals through covert action, and use military force to compel them to capitulate. If necessary, the United States could invade and depose hostile regimes at little cost or risk to itself. Once these obstreperous tyrants were gone, the United States and the rest of the liberal international community could step in and help liberated and grateful populations create new and legitimate democracies, thereby expanding the liberal, pro-American order even more.”

This ambitious program rests on flawed foundations. Walt is especially effective in his criticism of one of these foundations, “democratic peace theory.” Concerning this dubious doctrine, he says: “Although it is true that liberal democracies have fought few wars with each other, there is still no satisfactory explanation of why this is the case ... history also warns that newly democratized states are especially prone to internal and external conflicts. ... Democratic peace theory also says little about how liberal states should deal with authoritarian regimes, except to suggest that overthrowing them is the path to perpetual peace ... it is a potent recipe for trouble between liberal and non-liberal countries.”

Liberal hegemony failed in large part because it ignored basic “truths” about how nations act, true it has been a principal aim of the “structural realist” school of international relations, of which Walt and his colleague John Mearsheimer are leading members, to emphasize. “Imbalances of power make other states nervous, especially when the strongest state uses its power with little regard for others’ interests. It was entirely predictable that the so-called rogue states would look for ways to keep American power in check, for example because the United States had made spreading democracy a centerpiece of its grand strategy and taken dead aim at a number of these countries. ... America’s dominant position also alarmed some of America’s closest allies, including some foreign democracies. ... Their concerns were well-founded — not because the United States deliberately used its power to harm friendly countries like France, but because America’s vast capabilities made it easy to hurt them by accident. The invasion of Iraq is a perfect illustration: it eventually led to the emergence of ISIS, whose online recruiting and brutal conduct inspired terrorist attacks in a number of European countries and contributed to the refugee crisis that engulfed Europe in 2015.”

Despite the manifest failure of the liberal hegemony program, its advocates have retained their influence. They are rarely called to account for their mistakes. Walt writes with justifiable bitterness about one group among these advocates, the neoconservatives. “When it comes to U.S. foreign policy, the unchallenged world record for ‘second chances’ and ‘failing upward’ are America’s neoconservatives. Beginning in the mid-1980s, this influential network of hard-line pundits, journalists, think tank analysts, and government officials developed, purveyed and promoted an expansive vision of American power as a positive force in world affairs. They conceived and sold the idea of invading Iraq and toppling Saddam Hussein and insisted that this bold move would enable the United States to transform much of the Middle East into a sea of pro-American democracies. ... None of their rosy visions have come to pass, and if holding people to account were a guiding principle inside the foreign policy community, these individuals would now be marginal figures.” They in fact remain influential, and Elliot Abrams, one of the neoconservatives Walt discusses, has recently been appointed United States Special Representative to Venezuela.

Walt’s case against liberal hegemony is convincing, but what does he propose to put in its place? True to his structural realism, he calls for “offshore balancing.” Under this policy, the United States would abandon its futile attempt to spread liberal democracy throughout the world. Instead, America would concentrate on selected areas deemed to be vital national interests. “Offshore balancers believe that only a few areas of the globe are of vital importance to U.S. security or prosperity and thus worth sending Americans to fight and die for. The first vital region is the Western hemisphere itself, where America’s dominant position ensures that no neighbor can pose a serious threat to the U.S. homeland. ... But unlike isolationists, offshore balancers believe that three distant regions also matter to the United states: Europe, Northeast Asia, and the Persian Gulf.”

In these regions, the aim of the United States would be to prevent the emergence of a “local hegemon.” If one seemed on the horizon, America should encourage states in the region to “balance against” the rising power. America would remain “offshore” as long as possible, although military intervention would by no means be excluded if the regional states failed in their efforts to balance.

Walt is right that his strategy would “prolong America’s position of primacy” for much less cost than the policy of liberal hegemony, but why is it in our interest to maintain American supremacy at all? Walt has not fully broken from the globalist assumptions he attacks so well throughout The Hell of Good Intentions. We should instead adopt the non-interventionist policy so ably championed by Ron Paul: only the defense of the United States itself is a “vital national interest.” Walt’s failure to follow the logic of his own argument against hegemony to a non-interventionist conclusion explains why he is an “outlier” in the foreign policy establishment rather than a complete opponent of that group. That is unfortunate, but his book contains a great deal of value to those who favor peace and prosperity as national goals.