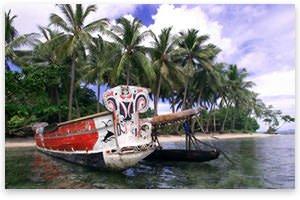 Anticapitalists like to use examples of supposedly selfless gift exchanges in "primitive" societies to contrast with the greedy behavior of modern markets. But a closer look at one famous exotic gift exchange, the Trobriand Islanders' Kula, actually reinforces libertarians' claims about the universal power of the profit motive.

In the elaborate Kula trade among the islands off the eastern tip of New Guinea, men sailed for many miles to receive ceremonial gifts of shell jewelry, apparently for the sole purpose of giving those gifts away again within a year or two.

Such a journey was both costly and dangerous. Men hired craftsmen to build special seagoing canoes sturdy and swift enough for the task. And the Trobrianders' Kula journeys took them as far as the home of the Dobuans, who lived on an island 60 miles away, spoke a different language, and were regarded as cannibals.

When the visitors arrived, if all went well, their hosts greeted them with ceremonial gifts, "dirty, greasy, and insignificant looking native trinkets," as one anthropologist jokingly called them.1 The most coveted of these were shell necklaces and armbands, which belonged to the special category of valuables called vaygu'a.

But despite having come all that way to acquire these trinkets, the visitors did not plan to keep them for very long. Instead, the Trobrianders intended to give all the vaygu'a away within a year or two when they acted as hosts in turn to their own visitors from other islands.

In fact, men who held on to vaygu'a for much longer than that were "universally recognised as reprehensible and discreditable," and called "slow" or "hard in the Kula."2

Can all that risk and effort really have been undertaken just for the joy of giving the grimy baubles away again?

The socialist economist Karl Polanyi seems to have believed just that. And he admired the islanders for it. Polanyi praised the Kula exchange as "a gainless and marketless economy … one of the most elaborate trading transactions known to man," in which "no profit is involved, either in money or in kind."3  In an informal memo, Murray Rothbard ridiculed the Kula and Polanyi's love of it:

He is apparently enchanted by the "Kula trade." … What Polanyi especially likes about this is its lack of true mutual gain — or is it its obvious pointlessness?4

"Gainless"? "Marketless"? Obviously pointless? What was really happening in the Kula trade?

When anthropologist Bronislaw Malinowski travelled to the Trobriands in the 1910s, he found that the Kula was the consuming passion of men's everyday life. Gaining vaygu'a was proof of a man's "luck, daring, and enterprise. 5Indeed,

the temporary ownership allows him to draw a great deal of renown, to exhibit his article, to tell how he obtained it, and to plan to whom he is going to give it. And all this forms one of the favorite subjects of tribal conversation and gossip, in which the feats and the glory in Kula of chiefs or commoners are constantly discussed.

These "dirty, greasy" bits of shell were in fact prestige goods, just as valuable and just as arbitrary as Rolex watches, luxury cars, and sports trophies. Such goods attract attention and advertise your achievements. They say, "I am powerful enough to have this."

In North America, when a team in the National Hockey League wins the Stanley Cup, it brings the team members enormous fame (at least in Canada). But instead of making a new cup each year, the NHL uses the same trophy over and over; so the winning team holds the Stanley Cup only until the next team wins it away. The cup is a storied artifact that brings fame to any man who possesses it, even though no man can possess it forever.

The vaygu'a were the same. The point was not to have them permanently, but to get them for a time.

Within the Kula, each act of generosity was in fact a careful investment. Whomever you gave a vaygu'a to was obligated to repay you later with a "counter-gift" of a different artifact he owned. So a man planned out whom to give things to in order to control whom he would get thingsfrom. In this way, a patient and clever giver of vaygu'a could maneuver the most famous artifacts into his own hands.

The Kula was not pointless (contra Rothbard) and definitely not gainless (contra Polanyi). It was an organized search for personal profit. True, the profit was reputational, not strictly material. But ultimately, every "profit" — whether in fiat dollars, or NHL trophies, or shell necklaces — is a mental phenomenon, a fulfillment of our subjective whims greater than the costs we paid to achieve it. The remarkable thing about free exchanges like the Kula is that in every exchange both parties make a profit.

But what about Polanyi's claim that the Kula was "marketless"? In one sense, he is right: the Kula itself was just an elaborate gift exchange, not a market.

Yet the Kula also protected and encouraged extensive barter between the Trobrianders, the Dobuans, the Amphlett Islanders, and the several other cultures who took part in it. In each Kula journey, the visitors' canoes came packed full of food, or pottery, or artwork — whatever goods their community made best. And after the initial gift-giving ceremony on the hosts' beach, the visitors remained for several days of bartering over this stuff with their hosts.

As in much of Melanesia, the islands off the east coast of New Guinea were rife with the danger of warfare, which certainly threatened to disrupt trade and force each village into economic isolation. But the Kula mitigated this threat by providing a kind of "peace-making ceremony" between men of different communities and cultures.6

A good Kula partnership between two men could provide a steady flow of vaygu'a through numerous gifts and counter-gifts over decades; the relationship could even be passed down as an inheritance to a son. Each man thus had good reason to protect his partners against theft or violence when they came to visit his island.

In short, the decentralized network of Kula gift exchanges provided the social scaffolding for international trade protected from robbery and warfare. No state required.

The Power of Profits

Western socialists like Polanyi are often eager to use a romantic interpretation of traditional cultures to attack markets or profits as unnecessary or unnatural. The rhetorical strategy is to cast the "primitives" in the role of generous, uncalculating tropical pixies, and then compare us very real, selfish, scheming apes unfavorably to them.

Caught in this rhetorical battle, Rothbard can hardly be blamed for hastily dismissing the Kula as "obvious pointlessness." Indeed, if Polanyi's nonsensical account of a profitless Kula were accurate, Rothbard's characterization would be perfectly correct.

But the truth is this: every human in every culture chooses the best means he can imagine to achieve the ends he desires. Each participant in the Kula carried it on because he expected to make some kind of profit. And the net result of the Kula, like that of all systems of truly voluntary exchange, was mutual gain and international peace through private profit.