The European Union Is Anti-European 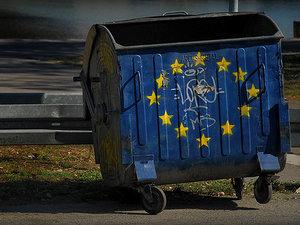 What is Europe? It seems that no rigorous answer can be provided. Europe is not exactly a continent. It is not a political entity. It is not a united people. The best definition, in fact, may be that Europe is the outcome of a long historical process that engendered unique institutions and a unique vision of what men ought to be. The idea that men ought to be free from violent government interference. Europe has no founding fathers. Its birth was not orchestrated but completely spontaneous. Its development was not imposed by armies and governments but was the voluntary product of clerics, merchants, serfs, and intellectuals who were seeking to interact freely with each other. Europeans were united by their freedoms and divided by their governments. In other words, Europe was built against States and their arbitrary restrictions, not by them.

After the fall of the Roman Empire a period of political anarchy followed where cities, aristocrats, kings, and the church all competed with each other. Therefore, as Dr. Ralph Raico noted in his article “The European Miracle,”

Although geographical factors played a role, the key to western development is to be found in the fact that, while Europe constituted a single civilization — Latin Christendom — it was at the same time radically decentralized. In contrast to other cultures — especially China, India, and the Islamic world — Europe comprised a system of divided and, hence, competing powers and jurisdictions.

In other words, over the centuries, a long evolution of the institutions gave birth to personal liberty. Although the European aristocracies and states were restricting freedom, they were forced to grant more autonomy to their subjects, for, if they did not, people were opting out by migrating or using black markets. As Leonard Liggio puts it, after 1000 A.D.:

While bound by the chains of the Peace and Truce of God from looting the people, the uncountable manors and baronies meant uncounted competing jurisdictions in close proximity. ... This polycentric system created a check on politicians; the artisan or merchant could move down the road to another jurisdiction if taxes or regulation were imposed.

Europe was where the road to freedom began. It was in Europe that the values of individualism, liberalism, and autonomy rose from history and gave humanity a sense of progress that no civilization had ever experienced to such an extent before. Unfortunately, the values and institutions that made Europe great vanished under the pressure of political centralization, nationalism, statism, socialism, and fascism in the nineteenth and twentieth centuries. Today, however, a new danger looms over Europe — the European Union.

The European Institutions Against the Free Market

Contrary to what is often said, the European Union has nothing to do with peace, freedom, free trade, free capital and migration movement, cooperation, or stability. All this can very well be provided in a decentralized system. The European Union is nothing more than a cartel of governments that tries to gain power by harmonizing the fiscal and regulatory legislation in every member State. Article 99 of the Treaty of Rome (1957) clearly states that indirect taxation “can be harmonized in the interest of the Common Market” by the European Commission. As for Article 101 of the same Treaty, it explicitly restrains regulatory competition “where the Commission finds that a disparity existing between the legislative or administrative provisions of the Member States distorts the conditions of competition in the Common Market.”

Since the very beginning, with the creation of the European Coal and Steel Community (ECSC) in 1951, the European institutions were more planning agencies than anything else. Indeed, the coal and steel industries at the time were mostly nationalized and the goal of the ECSC was to coordinate governments’ activities in these two sectors, not to liberalize activity. The fact that the ECSC was not about free trade but about government planning was known by everybody at the time. It was Robert Schuman, the French minister of foreign affairs, who proposed in his declaration of 9 May 1950, that the Franco-German coal and steel production be placed under a common High Authority within the framework of an organization in which other European countries could participate. Also, the ECSC created for the first time European anti-trust legislation, which as Austrians know, is nothing less than government planning in the name of an erroneous vision of what competition is. Even the Treaty of Rome (1957), the basis of the EU as we know it, despite enacting the free movement of goods, capital, and persons, remains a highly statist treaty. Indeed, it is often forgotten that among other things, the Treaty of Rome created a “European Investment Bank,” a “European Social Fund,” the highly protectionist “common agricultural policy,” the “common transport policy,” and reinforced European anti-trust legislation. Therefore, if in the short and medium run, the Treaty of Rome, by breaking the neck of protectionism, was a boon for the European economy, it created institutions that could easily expand their regulatory power in the future, and that is exactly what they did.

Many free marketers support the European Union on the ground that even if their regulations are bad, they are still far better than those produced by our very prolific national governments. Such a line of argument, often used in more socialist countries such as France, is sheer nonsense. It is the equivalent of saying: “I don’t mind being robbed twice because the second thief will be much nicer to me.” The question is not how to make “better” regulations but how to expand free trade.

These two sorts of individualism are today at the root of two different sorts of Europeanism. True Europeanism admits that most of what made Europe was not planned but rather spontaneous. The implications are that we ought to have as much decentralization as possible for Europe to continue to strive and to safeguard human liberties. On the other hand, false Europeanism thinks that Europe can only truly become Europe if planning by common political institutions exists. False Europeanists believe that the only alternative is between Nation States and the European Union. Their defense of a centralized European political entity is based on the erroneous idea that political centralization is positively linked to the process of civilization because society, law, markets, prosperity, and the “European spirit” ought to be designed by rulers. Europe during the Middle Ages, those thinkers say, lacked trade integration because it lacked political unification. It follows that we must be grateful today for the existence of the European Union. In their narrative, economic progress took place only when “Europe” slowly began to develop new trading alliances that combined some aspects of military protection with something akin to a free-trade area. But this version of history is very far from the truth. In the Middle Ages for instance, the lex mercatoria, the law of merchants, was purely private. Furthermore, the protective tariffs were mostly ignored anyway by Europeans. Smuggling was so widespread that England in the late Middle Ages should be in fact considered as a nation of smugglers rather than a nation of merchants. As Murray Rothbard noted in Conceived in Liberty:

Too many historians have fallen under the spell of the interpretation of the late nineteenth-century German economic historians (for example, Schmoller, Bucher, Ehrenberg): that the development of a strong centralized nation-state was requisite to the development of capitalism in the early modern period. Not only is this thesis refuted by the flourishing of commercial capitalism in the Middle Ages in the local and non-centralized cities of northern Italy, the Hanseatic League, and the fairs of Champagne. … It is also refuted by the outstanding growth of the capitalist economy in free, localized Antwerp and Holland in the sixteenth and seventeenth centuries. Thus the Dutch came to outstrip the rest of Europe while retaining medieval local autonomy and eschewing state-building, mercantilism, government participation in enterprise — and aggressive war.

Thus, the idea that a centralized authority, in our case the European Union, is necessary for free trade is pure fantasy, It is false Europeanism. Its constructivist approach has prevailed in European institutions since the beginning. For example, one of the goals advanced by the Treaty of Rome was to “create markets” through a unified European Anti-trust legislation. Similarly, the official justification of the Common Agricultural Policy introduced in 1962 was to create a unified agricultural market. But markets do not need States or treaties to exist and they certainly do not need the European Union.

The parallel between false Europeanism and false individualism is also relevant when it comes to their respective imperialistic tendencies. Whereas the French revolutionaries wanted to invade Europe to impose their “universal values” through force, the European Union does not tolerate, in the name of Europe, independent States that do not want to submit to Brussels. Switzerland, for instance, is forced by the European Union to adopt countless regulations concerning food safety and gun ownership. If the Swiss confederation does not comply with many provisions of European law, the European Union threatens to cut Switzerland’s access to the single market.

The most incredible political success of the European Union zealots is their constant shaming of those who refuse to submit to a European hegemonic super-State. But we must understand that only so-called “Euro sceptics” can truly be pro-Europe. Only “Euro sceptics” can be loyal toward the history and liberal values of their continent. In other words, the European Union is a highly anti-European institution.

On June 23, 2016, the British will vote on whether they want to stay in the EU or not. If the NO vote wins, it might be the end of the European Union as we know it. Historically, Britain played a major role in the maintenance of a fairly decentralized European order. Whether it was with Napoleonic France, or the German 2nd Reich, or Nazi Germany, it has always been Britain that ultimately helped to break up the hegemonic endeavors of empires on continental Europe. The question is, then, will Britain play its historical role this summer against the imperialistic European Union? We should consider any attempt to establish a more decentralized system with more competition between States as a boon for Europe and the Europeans. To be sure, the Nation-States must be dismantled, but not if it means the creation of an even bigger European Leviathan. It is, on the contrary, the regionalists and independence movements that must be supported, whether it is Scotland, Catalonia, or Corsica. The European miracle can be revived only through extreme political decentralization. What history teaches us is that Europe is greater than the individuals that compose it only insofar as it respects liberty. Insofar as it is controlled or directed by a monolithic and central political authority or by bellicose Nation-States, Europe is limited by the inability of Europeans to escape the arbitrary restrictions of their governments.