GET NEWS AND ARTICLES IN YOUR INBOXPrint
A
A
Home | Mises Library | The Euro: Its Inevitable End

The Euro: Its Inevitable End 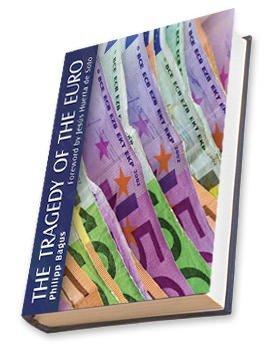 The political project of the euro is in deep trouble. It seems that Friedman's curse is beginning to materialize. Despite the European Union and International Monetary Fund's pledging three-quarters of a trillion of our euros to put out the debt-crisis wildfire, interest rates on troubled sovereign debts are even higher than before the announcement of the bailout funds. Not that this is a surprise to anyone.

Another loan to an already overindebted country is not a real solution to its problems — something private investors know very well. It's just a very expensive buying of time for those who happened to own the bonds and wonder what to do now. During this bought time, one can pretend that the problem will disappear thanks to sudden and miraculous economic growth. Ireland got bailed out. Portugal got bailed out. For Greece, one bailout was not enough.

Now, just a year later, Greece is asking again for the common European credit card in order to support a standard of living they became accustomed to thanks to the euro and with which it is very hard to part. Greece is a perfect example of the consequences of the implicit bailout guarantee from other EMU member states. A country on the edge of default with a debt-to-GDP ratio of over 150 percent — even after "radical" austerity measures — posted a public-finance deficit of 10.5 percent of GDP in 2010.

One troubling question keeps reappearing — What will happen to the patchwork safety net if the Italian or Spanish elephant falls into it? Will it hold? Or would Germany and the other countries holding it be better off letting go, so as to avoid being pulled over the cliff of default as well?

Today, we Slovaks are no longer just uninvolved bystanders, watching with interest as the euro drama unfolds. Since 2009, the euro's problems are our problems too, and now our chips are on the table. When you see press conferences announcing newer and bigger bailout packages, just divide the figures quoted by 100 to find out just how much European "solidarity" will cost us.

To mention solidarity while bailing out countries with irresponsible fiscal policy — and banks misled by the ECB's illusory easy-money policy — leaves a bad taste in Slovaks' mouths. This kind of "solidarity" is not permitted by the recently ratified Lisbon treaty. Moreover, the Slovak worker can only dream of a Greek-level pension, and Slovakia's own banking sector had to be restructured just a decade ago at a huge cost (over 10 percent of GDP). And now, as the second-poorest EMU member, we are expected to send money to pay Portuguese public workers and to save French banks after their unwise investments in Ireland?

There was not much of a discussion about euro adoption in Slovakia. The eagerness of politicians, experts, and the lay public to adopt the euro as soon as possible is easy to understand. The euro was supposed to protect us from our own politicians, who clearly showed what they are capable of in the late '90s. And it was flattering, too, to finally be a leader in at least something among our postcommunist neighbors. But this desire clouded our perception of the club we were about to join.

Yes, the common currency has its advantages, and monetary nationalism is costly and economically indefensible. But many ignore the key question of the currency's quality: What is the backing of the currency and who controls its production? In fear of another failure by our own political class, we forgot that the euro is not a gold standard lying outside the reach and control of politicians, but only a bigger and more complicated political project with all the ills that attend this sort of centrally planned structure. The fact that a politician speaks French or German doesn't make him a morally pristine agent free of any self-interest.

Thanks to its institutional character, the euro is a common resource utilized by the EMU countries. Control of money production, and all related benefits, has been moved from national governments into the platonically guarded supranational space of the eurosystem. Suddenly, it is possible to cover public-finance deficits with newly created euros, while the costs of this process — in the form of price inflation, various asset bubbles, and a deformed production structure — fall not just on the irresponsible country but on all members of the club.

Slovaks have a very intense historical experience with common resources. For them, the tragedy of the commons is not just an abstract economic concept, and the saying "He who does not steal, steals from his family" hints at an intimate public understanding of all the problems brought about by ill-defined or undefended property rights. The rules of the Stability and Growth Pact were supposed to police the euro commons, but the countries involved have simply ignored the rules, making the pact into an impotent manifesto.

With the onset of the financial crisis, the illusion created by newly created money and cheap loans not backed by savings evaporated. Losses from malinvestments — along with necessary reductions in standards of living or deep cuts in generous social benefits — are painful but inevitable. Changes in the rules of the euro game (the creation of the European Stabilization Mechanism by the addition of a new article to the Lisbon treaty) should allow a shifting of the losses from the places where they originated to taxpayers in other countries.

The European Union is changing into a wealth-redistribution mechanism between countries before our eyes. The potential default of one member state is automatically — and illogically — associated with the end of the union or even a potential war in Europe by EU representatives. However, hardly anything stirs nationalistic passion more than inequitable transfers of wealth. And an increase of indebtedness among the last relatively healthy countries left in the effort to avert the inevitable defaults doesn't add to the strength of the euro.

After 2013, as a part of the permanent European Stabilization Mechanism, Slovakia is projected to guarantee debts of up to almost six billion euros (one-fifth of the current government debt). You won't find risks like this in the official Slovak SWOT pre-EMU-entry analyses. Neither would you find discussion about possible government failures and fiscal free riding allowed by the institutional setup of the eurosystem there. We saw the euro as we wanted to see it, not as it really was. Ireland was presented as a role model for the positive effects of the common European currency, not as a Celtic Tiger on the steroids of irresponsible European monetary policy. The evidence of misuse of the euro for irresponsible fiscal policy was right in front of us, and in spite of the countless breaches of the Stability and Growth Pact, nobody held the fiscally unsound countries responsible. Nobody had to pay.

Even though we have already made the decision and the euro is already in our pockets, it's not yet too late in Slovakia to focus on the issues that didn't resonate enough in the pre-entry, euro-optimistic discussion. At least we will better understand what is happening to our money these days.

This article is the foreword to The Tragedy of the Euro, the Slovak edition (2011)

Juraj Karpiš is a cofounder of the free-market Institute of Economic and Social Studies in Bratislava. His work focuses on monetary policy, public finance, and healthcare systems.