Escape from the Depreciating Dollar 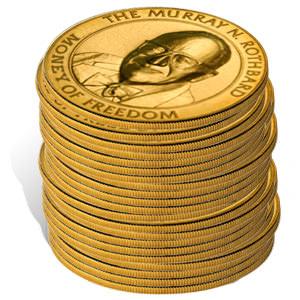 For believers in liberty and sound economics, it has been a series of devastating weeks. The crisis of fiat money, long foretold by the Austrian school, finally came. But there turns out to be no great satisfaction in saying "I told you so."

If it would do any good, it would be worth it. But Treasury officials and central bankers are proceeding as if they had nothing to do with actually causing the bubble and the bursting of the bubble — acting, in fact, as if the old tale about the need to support prices to fix the recession were true. It is the perfect storm: the big banks loot us through government, while the academic economists approve it as applied science.

To top it off, the unreconstructed Keynesian Paul Krugman has won the Swedish central bank's Nobel Prize in economics. It wasn't for his reflationist views but for his trade theory; nonetheless, his overall oeuvre will receive new attention, and his views on the crisis are identical to the kind of fallacy-ridden central planning that caused the downturn of 1929 to turn into the Great Depression. Put his ideas in charge, and we are doomed.

Instead, of course, they should turn to those who both predicted this crisis and who offer a coherent explanation for it. The most important priority right now is dramatic monetary reform. In an ideal world, officials would follow the Mises/Rothbard strategy of defining the dollar as a weight of gold and permit all-around convertibility at all levels.

The immediate criticism is that this step would curb the power of central bankers and government to create money out of thin air to fix the crisis. But the criticism alone makes the point. It would indeed restrict their power, and that is precisely why it needs to be done. True liquidity is based on savings and capital; it cannot be created by decree. Decrees end up creating money out of thin air, which ends up overriding market preferences and generating inflation. Everything officials do to fix the crisis ends up prolonging it.

Here's the core problem of the gold-standard idea. It is indeed the best path. But the people charged with implementing it will invariably be the very people, advancement of whose interests has caused the current problem and have the least incentive to change the system. We've seen in the last several weeks how these people are willing to blow up the world rather than face liquidation. So the question becomes, how can we take steps toward sound money and banking without depending on the good will of the officials in charge?

The answer is provided in some of the writings of Jörg Guido Hülsmann and, before him, Hans Sennholz. Guido is a student of Rothbard's while Hans was a student of Mises's. Both agree on an alternative path forward that embraces radical decontrol of money and banking in the hope of a currency competition that will at least allow gold currency as an option. Guido's book on the topic will be appearing soon, and Hans Sennholz's relevant work here is Money and Freedom, which is newly available from Mises.org. (This is also the approach that Ron Paul, a longtime advocate of the gold standard, took during his campaign.)

Currently the government has in place severe restrictions on what currency you can use as legal tender. The courts do not enforce other kinds of monetary contracts. Anyone who comes up with alternative currency is going to face possible prosecution. For this reason, the dollar is mandatory. We will be stuck with it even as the feds are destroying it. There is no way out.

All these restrictions need to be repealed as a step toward monetary reform. People should be free to use any money they can get each other to accept. More than that, people should be free to introduce new moneys based on gold or silver or any other commodity, and develop payment systems based on this, whether that means paper signifiers or digital goods. The market is capable of policing this system the same way it does retail trade.

Money originated in market competition long before the age of the nation-state. It is a product of the market, not of state edict or some mythical "social compact." Nor is there a reason to put a stop to the competitive process once it has decided upon a single money. Money can and does fail, especially once it is nationalized and given over to a central bank to manage. Permitting freedom in money production and use amounts to permitting market forces to continue to select the most-serviceable alternative.

In many ways, this proposal finds support in the work of F.A. Hayek, who also advocated competitive currencies. But this one goes further in allowing a full free market in minting money by private firms.

There is historical precedent for this in George Selgin's Good Money. In England, early in the Industrial Revolution, the state also maintained a monopoly on money production but it failed to make enough small-denomination coins to meet the demand. Private button makers swung into action to make coins that were circulated widely. Their quality was controlled by market means, and they became far more desirable and widely circulated than government money.

What's interesting here is how the market appeared to violate what is called Gresham's Law, which asserts that "bad money" drives good money underground. But that is only true if the "bad money" is artificially overvalued. In settings in which the official currency is failing and alternatives are available, the process can work in the reverse, with good money replacing bad as the primary means of exchange.

Not only is the soundness of the world economy at stake; there is a matter of human rights: the rights to invent, trade, make contracts, and associate. The major strategic advantage of this program is that it is not asking the state to do anything positive with its monetary powers. A demand for monetary freedom — a repeal of legal-tender laws and the opening up of the banking system to private enterprise — is nothing more than the extension of freedom generally.