The Errors of Keynes 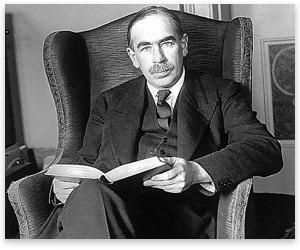 Now we can add a new name to that distinguished list. In 2012, Juan Ramón Rallo has published a new Austrian critique of TGT in Spanish with the title Los Errores de la Vieja Economía (The Failure of the Old Economics) in honor of Hazlitt's work The Failure of the 'New Economics'.

In Hazlitt's time, Keynes's program was still revolutionary and described by Hazlitt as a kind of “New Economics” that broke with the insights of classical economics and especially with Say's Law. Now, Keynesianism is mainstream. Keynesianism, and especially its main idea that spending reduces unemployment, is still taught in universities, applied by grateful politicians, and prominently defended by the 2008 Nobel Prize winner Paul Krugman.

Indeed, the immediate political response to the current financial crisis in the Western World was inspired by TGT. A second Great Depression was to be prevented and Keynes's insights applied. Governments engaged in loose monetary policy combined with fiscal stimulus in response to what, through Keynesian eyes, appeared to be a bubble caused by reckless speculation, which was in turn inspired by animal spirits. Thus, even if Rallo's book were just a summary of the old arguments against TGT, the moment for publication would be more than appropriate, since the ideas of the past are still the praxis of the present.

Yet, Los Errores de la Vieja Economía is much more than a summary and synthesis of the old arguments by the aforementioned Austrian authors. Rallo builds upon, combines, and develops these arguments in a systematic way. Most importantly, he adds his own innovative ideas to develop a devastating case against TGT.

Rallo's critique of TGT employing Austrian theory is rigorous, systematic and exhaustive. Significantly, Keynes's ideas are not twisted or distorted. The absence of strawman arguments makes Rallo's attack against the core of Keynesian beliefs stronger than most. Rallo also does not search for terminological contradictions and inconsistencies. In this sense, Rallo's critique is more profound and devastating than for example the parts of Henry Hazlitt's brilliant critique that emphasize Keynes's inconsistencies, imprecision, and explanatory fuzziness. Rallo has a great and genuine interest in giving a clear and coherent picture of Keynes's reasoning and presents Keynes in the most favorable light.

Let's have a look of some of Rallo's arguments, beginning with Keynes's famous critique of Say's Law. Keynes's distorted version of Say's Law in TGT states that supply creates its own demand. Rallo vindicates Say's Law in its original version: In the long run, the supply of a good adjusts to its demand. Ultimately, goods are offered to buy other goods (money included). One produces in order to demand, which implies that a general overproduction is impossible.

Say's Laws leads us straight forward to the most innovative argument in Rallo's book that addresses the old argument against hoarding. Even harsh critics of Keynes, for example from the monetarist or neoclassical camp, admit that Keynes was at least right in that hoarding is a destabilizing and dangerous activity.

Rallo, however, proves and emphasizes the social function of hoarding. To demand money is not to demand nothing from the market. Hoarding is the natural response of savers and consumers to a structure of production that does not adjust to their needs. It is a signal of protest to entrepreneurs: “Please offer different consumer and capital goods! Change the structure of production, since the composition of offered goods is not appropriate.”

In a situation of great uncertainty, it is even prudent to hoard and not immobilize funds for the long run. Rallo provides us a visual example. Let's assume that uncertainty increases because people expect an earthquake. They start to hoard, i.e., they increase their cash balance, which gives them more flexibility. This is completely rational and beneficial from the point of view of market participants. The alternative is to immobilize funds through government spending. The public production of skyscrapers is not only against the will of the more prudent people; it will also prove disastrous if the earthquake is realized.

Hoarding is an insurance against future uncertainties. Rallo argues that, if the demand for money increases (liquidity preference increases) due to the precautionary motive, short-term market rates of interest tend to fall, while long-term rates increase. People invest more short term and less long term in order to stay liquid. This leads to an adjustment of the structure of production. More resources will be used for the production of the most liquid good (i.e., gold in a gold standard), and for the production of consumer goods. The structure of production shifts toward shorter and less risky processes reducing longer and riskier ones. Hoarding, therefore, does not cause factors of production to be idle that shouldn’t be. Factors are just shifted toward gold production and shorter-term projects. Rallo insists that it is not irrational to hoard. Indeed, when long-term projects are maintained and economic conditions change, projects might have to be liquidated suddenly. For example, the earthquake would destroy the skyscraper in progress.

It should be noted that most Austrians do not hold a hybrid liquidity preference / time preference theory of interest. For Rallo the interest rate, or the structure of interest rates, is determined both by time preference and liquidity preference. Most Austrians defend the pure time preference theory of interest. My own position on this question can be found in this article co-authored with David Howden. Due to uncertainty an actor prefers to be liquid rather than illiquid. Due to time preference an actor prefers to be liquid rather sooner than later. Therefore, the yield curve tends to be upward sloping. When uncertainty increases, the yield curve tends to get steeper. In a financial crisis, however, another effect tends to prevail over this tendency. When society is in general illiquid, the high demand for short-term loans, the scramble for liquidity, tends to cause a downward sloping yield curve.

Idle resources are another important topic in Rallo's book since Keynes recommends inflation in the case of idle resources. Rallo asks why factors are unemployed and comes to the result that their owners demand a price for their services that is higher than their discounted marginal value product. In these circumstances, inflation implies a redistribution in favor of the owners of those factors, or a frustration of attempts to restructure, i.e., the economy suffers from forced saving or capital consumption.

Another important Keynesian idea that Rallo tackles is the famous liquidity trap. A liquidity trap exists when, in a depressed economy, interest rates are very low. In such a situation Keynes regards monetary policy as useless, because speculators will just hoard newly produced money. Speculators will not invest in bonds because they are at maximum prices and will fall when interest rates finally rise. At this point monetary policy becomes impotent. Public spending becomes necessary to stimulate aggregate demand.

Rallo shows that after an artificial boom, in a situation where there are many malinvestments and a general over-indebtedness in the economy, there is indeed almost no demand for loans even at very low interest rates. We are actually faced with an illiquidity trap, as agents struggle to improve their liquidity. They want to reduce their debts and not take on more loans. The monetary policy of low interest rates actually worsens the situation, because with low interest rates, there is no incentive to prepay and cancel debts (because their present value is raised). The solution to this situation of general uncertainty is hoarding, stable institutions, the liquidation of malinvestment and the reduction of debts.

As Rallo points out in contrast to TGT, it is not aggregate supply or aggregate demand that is important, but their composition. If, in a depression with a distorted structure of production, in a liquidity trap situation, aggregate demand is boosted by government spending, the existing structure cannot produce the goods that consumers want most urgently. The solution is not more spending and more debts, but debt reduction and the liquidation of malinvestments to make new and sustainable investments feasible.

In contrast, for Keynes, the problem is always insufficient demand. So what can we do if consumers and investors do not buy the goods of that companies offer, but instead hoard? Well, Keynes recommends lowering taxes and interest rates, to devalue the currency, or that the government buys the products for consumers. But, why, asks Rallo, should consumers and investors buy goods they don't want?

Keynes’s answer is that otherwise unemployment will increase. Rallo responds astutely: But if a person is forced to buy with his salary something that he does not want, why shall this person work at all? The alternative to forced buying is to lower wages to their discounted marginal value product, which increases production and demand. As Rallo points out, society does not get richer if the government induces or forces people to buy goods they don't want. Thus, for Rallo the essence of TGT is the following: when people do not want to buy what is produced, the government should force them to act against their will.

The insights from Rallo's book presented here are only a small selection. Rallo also offers an analysis of Keynes's main definitions and the theoretical errors behind them, such as their pro-consumption bias. He provides an Austrian analysis of financial markets, discussing the interrelations between the yield curve, interest rates, the discount rate, the structure of investment, the liquidity trap and the stock market. He analyzes real and nominal wages, business cycles, political implications, and intellectual predecessors of Keynes's TGT using Austrian theory. Also very useful is Rallo's guide for readers of TGT that makes reading and spotting Keynes’s main mistakes, chapter by chapter, easy and efficient. As a plus, at the end of the book, Rallo also provides a critique of the IS-LM model developed by John Hicks and Franco Modigliani which formalized Keynes's theory and is still taught at universities around the world.

Rallo's book on Keynes's TGT is full of brilliant insights and provides the most powerful and complete case against Keynes currently available. The well-written Los Errores de la Vieja Economía will be the future reference for scholars and layman alike looking for errors in Keynes's thinking and today's policies. The main downside of the book is that it is written in Spanish. Hopefully, the work will be available in other languages soon.