In the wake of the stock-market plunge and S&P downgrade, economic pundits of all stripes are rushing to explain events. But as so often happens in economics, "believing is seeing." Keynesians, monetarists, and Austrians can all look at the slow-motion train wreck and feel vindicated by the data.

Naturally, I agree with Jeffrey Tucker that of the major schools of economic thought, the Austrians have been the best guides through the crisis. But the champion Keynesian, Paul Krugman, has been running victory laps for a long time now, claiming that he has been right while the free-market folks have been dead wrong. His column late last week beautifully illustrates that the facts can always be molded to fit a preconceived narrative.

Krugman: We've Never Been in Recovery

Krugman opens up with this depressing claim:

In case you had any doubts, Thursday's more than 500-point plunge in the Dow Jones industrial average and the drop in interest rates to near-record lows confirmed it: The economy isn't recovering, and Washington has been worrying about the wrong things.

It's not just that the threat of a double-dip recession has become very real. It's now impossible to deny the obvious, which is that we are not now and have never been on the road to recovery.

Wow, with pessimism like that, Krugman could get a gig at Mises.org! (Just check out the quotations Jeffrey Tucker has compiled from the dour Austrians.) If you read his whole column, you would get the sense that Krugman has been this much of a Debbie Downer all along.

But actually he hasn't — not in the same way that the Austrians have confidently said all along that the "recovery" and "green shoots" were completely bogus. For example, in August 2009 Krugman wrote,

I'm still very worried about the economy. There's still, I fear, a substantial chance that unemployment will remain high for a very long time. But we appear to have averted the worst: utter catastrophe no longer seems likely.

And Big Government, run by people who understand its virtues, is the reason why.

A little later that month, Krugman was more definitive. In a blog post entitled, "The Answer Is Yes," he opened with the following: "Barara Kiviat asks, is this a recovery or isn't it? The answer is yes."

Now of course, we're dealing with Krugman here. So anything he writes is capable of being matched up, after the fact, with whatever happens. All along, he has said that the job situation remains abysmal, the Republicans are itching for the chance to derail the fragile recovery, and so on. Just as he expertly covered himself on the stimulus — he can claim it was big enough to avoid another Great Depression, but not big enough to lead to a healthy economy — so too has Krugman always left himself an escape hatch in his discussion of the economy.

Even so, when it comes to people warning that this was not a recovery, the Austrians were clearly right and Krugman was wrong: go reread the quote above if you doubt me.

Krugman: If Only We Had Gotten More Inflation and Deficits

Now we come to the really fun part, where Krugman matter-of-factly explains why we're still stuck in this mess, three years and running:

To turn this disaster around, a lot of people are going to have to admit, to themselves at least, that they've been wrong and need to change their priorities, right away.

Of course, some players won't change. Republicans won't stop screaming about the deficit because they weren't sincere in the first place: Their deficit hawkery was a club with which to beat their political opponents, nothing more.…

But the policy disaster of the past two years wasn't just the result of G.O.P. obstructionism, which wouldn't have been so effective if the policy elite — including at least some senior figures in the Obama administration — hadn't agreed that deficit reduction, not job creation, should be our main priority. Nor should we let Ben Bernanke and his colleagues off the hook: The Fed has by no means done all it could, partly because it was more concerned with hypothetical inflation than with real unemployment, partly because it let itself be intimidated by the Ron Paul types.

In light of Krugman's explanation, the following two charts are significant. The first shows the absolute dollar amount of "net government saving" (a negative number refers to a budget deficit): 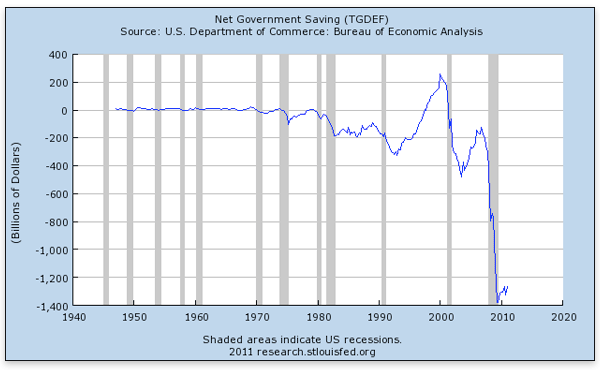 It's true, the above chart would not be quite as stark if I had converted it to percentages of GDP, but I want to remind the reader that just three years ago, the notion of a "trillion-dollar deficit" would have given Americans a heart attack. How many people remember that the pundits freaked out over George W. Bush's stimulus package in early 2008? That package was a mere $152 billion.

We see a similar story when we turn to monetary policy. Here's a chart of the "monetary base," which is the narrowest measure of the money supply and is directly controlled by the Fed: 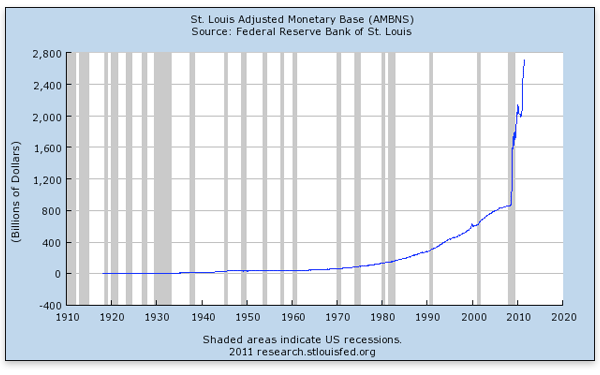 Do Krugman's assertions make any sense at all? After seeing the above two charts, how can anyone in his right mind think that our economic sluggishness is due to insufficient deficits and a timid Fed?

There are two main explanations for how a smart guy like Krugman (and other sharp guys desiring more inflation, such as Tyler Cowen) can hold such views without their heads exploding.

First, if one's model suggests that the solution to high unemployment and sluggish GDP growth is to boost aggregate demand, and then after these policies have been tried, unemployment is still high and GDP growth is still sluggish, why then, it's obvious that the budget deficits and rounds of quantitative easing weren't big enough. If you are certain that something is medicine, and the patient is still sick after a liberal dosage, then clearly the dosage wasn't liberal enough.

Beyond that, Krugman and other proponents of more intervention do have some of the data on their side, as he explains in a blog post from last week:

The WSJ view was that federal borrowing would crowd out private spending by driving interest rates sky-high, that the bond vigilantes would destroy the economy. Note that when the linked editorial was published, the 10-year rate was at 3.7%, with the Journal in effect predicting that it would go much higher.

My view was that government borrowing in a liquidity trap does not drive up rates, and indeed that rates would stay low as long as the economy stayed depressed.

How it turned out.

That's a pretty clear test; among other things, you would have lost a lot of money if you believed the WSJ view.

Inflation is another issue; the WSJ kept telling readers that a big inflationary surge was coming. Commodity prices have muddied this issue to some extent, but even so actual developments on the inflation front have been a lot closer to what Keynesians were predicting than to the right-wing line.

Note Krugman's brilliant rhetorical moves: The things that matter are the ones that he correctly predicted and the WSJ did not, namely interest rates and CPI inflation. Soaring commodity prices — which of course are consistent with the Peter Schiff view of the world, and not at all with the Keynesian "it's all about demand" view — just "muddied this issue to some extent." But we can just throw that out because we just know, deep down, that the Keynesian models are right and the right-wing models are wrong.

Krugman's line about losing money by following the WSJ view is something he has been saying for a good year now, but it too isn't so obvious. The one consistent bit of financial advice that the "paranoid" right-wing Tea Party types have been giving is to buy gold. (I myself was telling my readers to do this from the get-go, when I launched my personal blog in August 2008.) Over the last three years, gold is up more than 90 percent. That's not too shabby for people who supposedly have been totally wrong about how this crisis would play out.

Note too that Krugman most assuredly did not call the huge appreciation in gold (or other commodities, for that matter). The only explanation I have ever seen him offer is that gold is in a bubble pumped up by Glenn Beck.

One thing is certain, and here I agree with Krugman when he concludes his article like this: "We already know what isn't working: the economic policy of the past two years — and the millions of Americans who should have jobs, but don't."

Look again at the two charts above. Anyone with common sense will admit that the last two years have seen unprecedented budget deficits and monetary expansion. Krugman is correct; that hasn't been working at all. It's time to let the free market end this agony and bring us genuine recovery.