The Economics of Water in the West 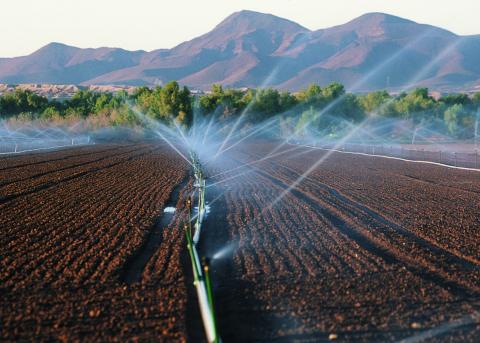 In the fall of 1990, I flew from Atlanta to San Diego, with our flight hugging the border of the United States and Mexico as we moved across the southwest deserts of New Mexico annd Arizona.  The farther west we flew, the more I saw some strange sights, those being great, circular fields of green crops located next to desert sands.

Then I saw the strangest sight of all: the place where the Colorado River simply stops flowing.  As we flew past the northern end of the Gulf of California, I could see that the Colorado River did not reach its former terminus, disappearing, instead, into the soil a few miles above the gulf’s northern beaches.

That was more than a decade ago, and the pressure on the Colorado River to provide water for development in the western USA has grown immensely since then.  A river that nearly 15 years ago was reduced to less than a trickle where there once was a mighty flow cannot be expected to fulfill the demands of people who are creating the kinds of land developments that one would expect to see in a place with average rainfall that measures nearly three digits, not in a desert.

In a recent New York Times article, writers Kirk Johnson and Dean E. Murphy write that there exists a real possibility that a long cycle of drought could drastically alter how westerners live and work. Not surprisingly, as one might expect of mainstream journalists from the nation’s "newspaper of record," the reporters demonstrate at best only a partial understanding of what is happening and what can be done about it.

At five years and counting, the drought that has parched much of the West is getting much harder to shrug off as a blip.

Those who worry most about the future of the West - politicians, scientists, business leaders, city planners and environmentalists - are increasingly realizing that a world of eternally blue skies and meager mountain snowpacks may not be a passing phenomenon but rather the return of a harsh climatic norm.

Continuing research into drought cycles over the last 800 years bears this out, strongly suggesting that the relatively wet weather across much of the West during the 20th century was a fluke. In other words, scientists who study tree rings and ocean temperatures say, the development of the modern urbanized West - one of the biggest growth spurts in the nation's history - may have been based on a colossal miscalculation.

That shift is shaking many assumptions about how the West is run. Arizona, California, Colorado, Nevada, New Mexico, Utah and Wyoming, the states that depend on the Colorado River, are preparing for the possibility of water shortages for the first time since the Hoover Dam was built in the 1930's to control the river's flow. The top water official of the Bush administration, Bennett W. Raley, said recently that the federal government might step in if the states could not decide among themselves how to cope with dwindling supplies, a threat that riled local officials but underscored the growing urgency.

While the Times portrays the federal government as the ultimate savior in this growing mess, history tells us otherwise. The American West faces severe water shortages because of U.S. Government policies of this past century; the solution is not for the government to further assert itself, but rather to end the water socialism that it has imposed.  The command system of economics that has led nations like North Korea and Cuba into ruin has also created the crisis in the West.

What the Times does not tell us is that water in the western states has been distributed politically, and that agricultural interests have held sway. Unlike the riparian system that governed water rights in the eastern USA, the West has developed under a "first user" principle that has operated on the principle of "use it or lose it" allocations, which is a sure recipe for waste.  In other words, the use and distribution of water in the West ultimately is an economic issue, something that the Times’ reporters have missed.

As Johnson and Murphy point out, the first users in the western system are agricultural interests, and they are allocated water at subsidized prices that would not be available even in eastern states where there was much more water.  At $5 to $15 for an acre-foot (enough water to cover an acre of ground with a foot of water), farmers are able to grow water-intensive crops such as alfalfa, cotton, and rice.  (Even with the water subsidies, rice is also subsidized on the price end, as the cost of growing rice is greater than the price that can be obtained for it on the free market.)

Paul Milgrom and John Roberts point out that these subsidies create situations that can only be called an economic version of the Theater of the Absurd:

Water rights for farmers vary considerably throughout the state of California, depending on the source of the water.  Some farmers have inherited extremely valuable water rights to have huge quantities of cheap water delivered to them.  Water for farming from the federal Bureau of Reclamation sells for $10 to $15 per acre-foot, and the cheapest subsidized water sells for as little as $3.50 per acre-foot, even though it may cost $100 to pump the water to the farmers…Meanwhile, households in Palo Alto pay about $65 for the same quantity of water, and some urban water users pay as much as $230.  The most desperate nonagricultural communities along the Pacific coast of California have gone as far as to build desalination plants to obtain potable water from the ocean at a cost of approximately $3,000 per acre-foot.  (Since this was written, it is now possible to desalinate ocean water at about $1,000 an acre-foot.)

How much of the cheap water is used?  One agricultural use alone, irrigating pastures for grazing cows and sheep, used 5.3 million acre-feet of water in 1986.  This is enough water to cover the District of Columbia to a depth of 1,250 feet! …Yet the industry of raising cattle and sheep on irrigated pasture in California had gross revenues for that year of less than $100 million.  Plainly, devoting so much water to such a low-value use is possible only because the water used to irrigate pastures is sold so cheaply.1

Government policies ensure that the water will be wasted, since those who have the water rights, as noted earlier, must "use it or lose it."  Furthermore, they have been prohibited from selling those rights to other farmers or urban users.  (The "reasoning" behind such regulations is that the government wishes to "preserve" the farm culture of Central California.)

Thus, we have taxpayers being forced to subsidize both the inputs into the crops and the crops themselves, all in the name of producing "cheap food" for consumers.  However, such obvious waste cannot go on indefinitely, since government can only provide subsidies, not create new sources of water.

While much rhetoric is spewed out extolling the "public" uses of water, it is clear that California and the American West in general would have benefited from private ownership and distribution of water.  No private firm would distribute a precious commodity like water in a desert in the way that the Bureau of Reclamation has done it.  While the subsidized farms in the West are private, the federal government owns the main input that is needed for their crops: water.  Thus, the term "private enterprise" here is meaningless, since the farms are wards of the state.

As the Times article demonstrates, however, this ridiculous saga may very well come to an end precisely because the government cannot create that which does not exist.  Under a private system of ownership – or even a semi-private one in which those with water rights would be permitted to sell them to whomever they would choose – the water would go to users willing to pay for them.

However, one might object, would that mean the end of some farms in California and elsewhere in the West?  Yes, that is exactly what that means.  The government has engaged in egregiously wasteful policies in order to politically distribute water, and those policies have created the current crisis.  One can be assured that if people actually had to pay market prices for water, and that water were privately owned in that region, it is doubtful that we would have seen the kind of wasteful development that has treated the western landscape as though it were a rain forest, not a desert.

To put it in a way that Austrians would understand, government policies have resulted in malinvested resources and development that cannot be sustained. As in Austrian Business Cycle Theory, which stresses that recovery cannot begin until the malinvested capital has been liquidated, the American West cannot begin to see true "sustainable" development until new policies are implemented.

Yes, the reality of less water will change much of how things are done in the West, and for many who lose jobs or a way of life, those changes will be very painful.  Unfortunately, had private enterprise prevailed in water from the beginning, we would not be faced with the prospect of almost certain depopulation of the West and the elimination of many farms and ranches.

Being that water is politically distributed in the West, it will be difficult for members of Congress and the unelected bureaucrats who have created this crisis in the first place to be willing to make the necessary changes.  However, changes will occur whether or not the government acts to get itself out of the water business.  That is because government can only create hot air, not water itself.