The Economics of Coupons and Other Price Cuts 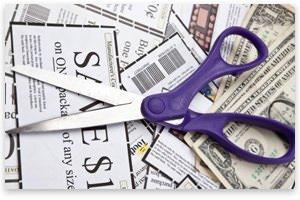 My local grocery store has an affiliated gas station that offers ten cents off per gallon for every $100 spent on groceries. I provoked a discussion on Facebook by asking whether I should use my accumulated points every time I fill up the tank, or whether it makes more sense to only use the option periodically in order to get a bigger discount.

We quickly agreed that so long as I only fill up when my tank is nearly empty, I should always use the points available. In other words, there is no advantage in strategically holding on to my points.

This was what I had been doing, and the exercise was mostly just a nod to the serious economics geeks who have befriended me on the social network. What concerned me, however, was that some people — presumably fans of Austrian economics — thought there was something fishy in the whole concept of price discounts.

In the present article I want to explain the standard economic rationale for coupons, senior-citizen discounts, and other forms of "price discrimination."

Some of the participants in the Facebook discussion were wary of the store's program. They argued that if my shopping at the grocery store allowed me to get cheaper gas, then the store was either charging too much for groceries or was charging everybody else too much for gas. In other words, the cynics thought that clearly the store wasn't giving me the discount out of altruism, and so somebody else (maybe me) must have been the one really "paying" for my cheap gas.

Despite the trivial example, the whole episode underscores two themes in free-market economics that at first appear contradictory. On the one hand, economists often cynically point out, "There ain't no such thing as a free lunch." Indeed, some economists use this phrase so frequently that they abbreviate it as "TANSTAAFL."

On the other hand, free-market economists going back at least to the classicals have stressed that social cooperation is a win-win scenario. The classical economists demonstrated that the mercantilists were wrong when they viewed their own nation's prosperity as a threat to all other nations, and vice versa. The principle of comparative advantage (perhaps inaccurately attributed to David Ricardo) and Bastiat's eloquent description of Economic Harmonies illustrate the theme that the presence of a "winner" in an economic transaction does not imply that there must be a corresponding "loser" out there.

How then to classify my grocery store's practice of offering cheap gas, or more generally the phenomenon of price discounts? On the one hand, we should indeed be cynical and realize that the businesses aren't showering the community with "free" gifts; the businesses are definitely getting something out of the practice. On the other hand, the positive-sum outcomes ubiquitous in market transactions should remind us that the businesses' gain needn't come at the expense of others in the community.

Coupons and Other Price Discounts: Examples of Price Discrimination

Many of the apparent puzzles in business pricing behavior fall away once we take into account two empirical facts: First, people are different when it comes to their willingness to buy more or less of a good at various prices. (In jargon, economists say that different consumers have different demand curves or schedules for various products and services.) Second, business owners initially don't know this information about the buying proclivities of their potential customers.

If a business only charges a single price to all of its customers, then — disregarding nonpecuniary motivations — the business tries to set the price in order to maximize (monetary) profits. The problem is that this one-price-fits-all policy will probably leave many potential win-win exchanges "on the table."

"The positive-sum outcomes ubiquitous in market transactions should remind us that the businesses' gain needn't come at the expense of others in the community."

For example, suppose a bar owner decides that charging $5 for a beer will maximize his profits. If he charged more than that, his sales would decline such that his total profits would go down, even though he would make a higher profit per beer. Going the other way, if he charged lower than $5 per beer, he would sell more units, but not enough to compensate for the smaller margin per beer. That's why (by stipulation) $5 is the profit-maximizing price if the owner has to charge all customers the same amount.

But what if the owner tries something creative, like letting women drink for free? This is the popular practice known as "Ladies Night." If women end up ordering 10 percent of the drinks on a particular Ladies Night, the cynic might conclude that the bar owner has to raise the price of beer sold to the men (perhaps to $5.50 or so) in order to "pay for" the discount given to women. This doesn't follow, however. Even at the same price of $5, the men might now order more beers during the night, because hanging out at the bar is more enjoyable when there are more women (who have been enticed into coming by the free drinks).

More generally, targeted price discounts allow businesses to engage in "price discrimination," which is the practice of offering different prices to different segments of the clientele. Movie theaters often offer cheaper prices to students and senior citizens, not because it's cheaper to have them sit in the theater, but because they are typically more careful with their spending than middle-aged adults with jobs. The use of coupons and rebates (which require the customer to mail in a form or go to a website) also help a business segregate the "cheapskates" among their customers from the people who are too busy to worry about saving a few dollars.

In all of these cases, the granting of special pricing for certain groups need not harm the groups paying full freight.

For example, if a movie theater in a small town were barred from giving child, student, and senior discounts — and instead had to charge one ticket price for all customers — it might not be able to stay in business. It would hardly help the middle-aged adults to have a "fair" pricing policy with no theater in town. This example shows the pitfalls in thinking about "the cost" of providing a seat in a movie theater and deriving the "fair" price that a theater ought to charge all customers.

Readers need to recall the ever-present discipline of market competition. If the use of coupons, rebates, and other strategies allows businesses to initially extract higher profits from their customer base, then this success will attract more firms into the industry. Prices will tend to be pushed down for all customers, even those paying full freight.

Pricing gimmicks such as student discounts, mail-in rebates, and "early-bird specials" make perfect sense once we consider the actual situation a business owner faces. Customers have different preferences and will not respond in identical ways to various prices. The business owner initially doesn't know which customers are sensitive to price and which are not. By taking advantage of correlations with other observable traits (such as a customer's age or willingness to clip coupons), the business owner can tailor his pricing and seize more win-win exchanges.