The Economics of Big Cities 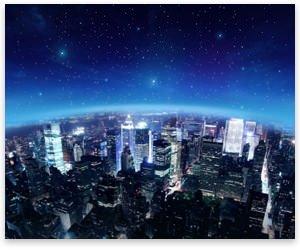 Large, densely populated urban areas put economic principles in a pressure cooker, as it were. The extremes of urban life make things evident that would not be as obvious in a small town. With the right combination of entrepreneurial drive and the rule of law, metropolitan areas are economic powerhouses.

The Division of Labor

Ludwig von Mises stressed that civilization itself rests on the higher productivity made possible by the division of labor. (I provide an introduction to the concept in this video lecture.) If each of us had to grow his own food, make his own clothes, build his own shelter, and so forth, most of us would soon die, and the few survivors would live in extreme poverty.

Fortunately, we can each specialize in a few tasks in which we have the comparative (or relative) advantage, producing far more than we personally need. For example, the dairy farmer produces more milk than his family would ever drink, while the workers at Ford produce more pickup trucks than they could ever drive. They each sell their output to the highest bidders, who in turn are doing the same with their own specialty products and services.

Because labor is more productive when it is distributed in this way, the end result is that total output is higher. Because there is more "stuff" to go around, per capita consumption is higher and everyone enjoys a standard of living that would be impossible without specialization and trade.

Although these principles hold for two people on a tropical island (like Crusoe and Friday), they are much more obvious in a bustling city. As the weekday begins, people quite visibly start "making the city work." Street vendors set up their carts and booths, buses and subways begin shipping throngs of people to their places of employment, and shopkeepers sweep the sidewalks in order to welcome customers into their stores. Delivery boys zoom around on bicycles moving packages from one business to another, while trucks bring fresh meat and produce to various restaurants.

In a major city, one can look out the window and actually see just how dependent it is on people doing various jobs in order to keep everything running smoothly. Every community is dependent on people, but in a suburb it's hard to actually observe that principle in action. In their neighborhoods, people just see other households (which are basically headquarters for consumption), while the activities of workers are hidden behind their cars (during the commute) and the walls of buildings that might be spread out over large distances.

Economies of Scale: The Benefits of a Large Market

It is no coincidence that the best chefs, clothing designers, stage actors, and lawyers tend to locate in large urban areas. Consider: Suppose a certain chef can prepare the most sumptuous filet mignon on planet Earth, but it is very expensive to "do it right." He could run a profitable restaurant in Boise, Idaho, charging $100 per meal. But given the customer base in Boise, he would only serve (say) 30 such meals in a typical night. That would generate enough revenue to pay for the rent, equipment, ingredients, and his two other employees, but there would not be much left over for the master chef.

In contrast, if he goes to New York, the chef can team up with some of the most talented marketers, interior designers, and other creative individuals to design a much more impressive restaurant. He can also hire some of the best waiters and waitresses in the country, because they happen to live in New York. Best of all, because of the huge and wealthy customer base, if our chef is as good as he thinks he is, he can charge (say) $250 per meal and serve 200 meals on a typical night. His expenses would be higher than in Boise, to be sure, but not proportionally higher. By scaling up the size of his operation, the master chef now could earn a substantial personal income.

Once we think through scenarios in this way, we can understand why "the best X" — whether X is Chinese food, ladies' shoes, or used bookstores — is typically available in a large city.

The Rationing of Market Prices

In the previous section we established the enormous advantage of being a producer in a large city: there is a huge market of potential customers, many of whom are extremely wealthy. Somebody who becomes successful in a large city can become a millionaire in a year, whereas it would be much harder to do so in a rural area populated with a few farms.

Some people just don't like crowds, and wouldn't move to busy cities for that reason. But the main explanation is that the price of land shoots up in order to ration it among the competing users. It's extremely expensive to buy or rent real estate in a wealthy urban area. Consequently the apartments and houses are smaller than they would be (other things equal) in a less-populated area.

The high price of land cuts into the profitability of businesses seeking to take advantage of the economies of scale from a city's customer base. For example, a deli in Manhattan will turn over its inventory (cans of soda, pasta and other prepared food in the salad bar, etc.) much more quickly than a deli in Boise. On the other hand, the owner of the Manhattan deli has to pay astronomical rent each month compared to his peer in Boise. In order to make it work, the Manhattan deli owner charges much higher prices for "the same" goods (such as cans of soda) while offering expensive items (such as fancy sushi rolls) that the deli in Boise wouldn't carry at all.

The high rental prices for commercial space ensure that only the best of the best can afford to have shops in Manhattan and other comparable cities. On the other hand, the high retail prices ("cost of living") ensure that not everybody moves to Manhattan and other metropolises. Many people say, "Sure, it has the best restaurants and musicals, but it's so expensive in Manhattan." Only the people who really enjoy the big-city life are willing to pay for it.

Thinking through the economics of big cities sheds light on general principles of free markets. As always, we see that property rights and voluntary exchange shower humanity with prosperity. Market prices give signals so that producers and consumers organize themselves in the most efficient way, given their capabilities and preferences.