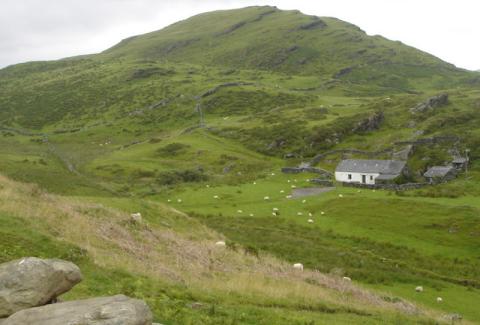 Some freedom-minded people pin their hope for liberty on withdrawing from an unfree world. In times of crisis, such as wars and recessions, this idea gains popularity. We might refer to this notion as "economic secession," borrowing the name from John Kennedy's article of the same title. Despairing of advancing the cause of liberty in society at large, they hope to be able to secure their own liberty anyway.

They may put their trust in new computer technologies, which they believe will let them hide money and economic transactions from the taxman. They may hope to withdraw into some remote location and "unplug from the grid." You can find ideas falling broadly under the umbrella of economic secession at Backwoods Home Magazine, in the writings of Claire Wolfe, in the many books on financial privacy, encryption, becoming invisible, and so on.

We don't mean to disparage someone who wants to move to the remote countryside, encrypt his email, or set up a numbered bank account in Bermuda. Such activities are not, in themselves, objectionable, and they may be a good choice for some people. But we do wish to point out that they do not solve the problem of the gradual erosion of liberty in our world.

We will not discuss the issue of whether it would be morally sound to abandon our fellows and withdraw from the effort to improve human life in society. We don't need to do so, because the attempt fails on its own terms, for several reasons.

First of all, "economic secessionists" often seem to confuse money with wealth. If they can hide their cash, they think, they can avoid taxes. But money is only useful in so far as you can exchange it for the economic goods and services you want to enjoy. In the long run you have to keep your real wealth where you live, or transfer it there. Otherwise it's worthless. Most real wealth is highly visible. The government of the place where you live or spend your time will be able to see this wealth and gain access to it; and thus can readily tax and regulate it. There is no sense in imagining that hiding your cash will get you off the hook; the government will simply seize your real assets for failure to pay taxes on them, as they already do today.

In many countries, governments have in recent years found it convenient for political purposes to shift the burden of taxation away from income taxes, towards sales and property taxes; and this at a time of rising taxes overall. For example, in the past two decades, income tax rates in the U.K. have fallen by about 30%, but local property taxes (rates and council tax) have increased three or four fold. Thus we should not expect the taxation of real wealth to prove problematic, even in those unlikely scenarios in which it is supposed that the bulk of ordinary people's incomes could be successfully concealed.

We would also point out that governments are increasingly forming tax collection cartels; there are no longer any real tax havens that the U.S. and other high-tax countries are not now bullying into submission. Ireland has come under pressure from other E.U. states for having "too low" a corporate tax rate. The U.S. is pushing the I.M.F. and World Bank to crackdown on "money laundering." The O.E.C.D. has been addressing the "problem" of countries that engage in "harmful tax competition." Even Switzerland, with its traditional and much-vaunted banking privacy, has caved in.

Economic secessionists may think that making it more expensive for the government to collect taxes will reduce its incentive to do so. But taxation is not, for the most part, about the government "making money," because modern governments actually consume only a tiny fraction of the total tax revenue; rather it is about redirecting the spending of individuals, and thus the collective spending of the economy, in ways predicated upon the political goals of the regime.

Typically, the cost of collecting a tax amounts to no more than a few percent of the revenue obtained; so the ability of governments to tax would not seriously be impeded until tax collection became at least fifty times more expensive (something the ready accessibility of real wealth makes most improbable). Note, by the way, that in order to promote their political aims governments may continue to collect particular taxes even when the monetary cost exceeds the monetary revenue. The marginal cost of collection, in cash terms, doesn't worry them.

People rarely go into politics or public administration in order to make money. Many of them could become considerably wealthier in the private sector (in purely pecuniary terms, though not in terms of what they actually want). What they want is mostly influence—for a wide variety of motives, both selfish and altruistic. They want to be (and in fact are) important—even if that importance is often only that of being an important pain in the neck.

That is why it is a mistake to think of government as primarily concerned with collecting as much tax revenue as possible, practicable, or profitable. That may be what bandits would do—but to governments taxation is merely one of the tools with which society as a whole is constrained and governed. Even the fact that government actions can prompt us to seek tax shelters confirms their influence!

Not only are we unable effectively to escape having the government tax us directly, we are also unable to escape the effect upon us of government taxes on others. Introductory economics classes teach that although the government may specify the legal incidence of a tax, its economic incidence is subsequently determined through the market. As Mises says: "It is the market, and not the revenue department, which decides upon whom the burden of the tax falls and how it affects production and consumption. The market and its inescapable law are supreme."

Even if an individual citizen succeeds in concealing all of his wealth and income from the tax collector, there will be others who cannot or will not do so. Someone who is inclined to say, "Well, that's their problem," does not realize that he is paying those taxes as well. If the butcher is taxed, he pays more for meat. If the airlines are taxed, he pays more to fly. If capital gains are taxed in some countries, that will lower the returns on capital in "tax havens," just as taxing corporate bonds lowers the return on tax-free municipals. Furthermore, rearranging one's affairs to avoid or evade taxes (the former is legal, the latter illegal) carries its own burdens, whether in terms of actual costs, lower returns to capital, or foregone opportunities. The costs of tax avoidance and tax evasion are also taxes.

What would happen if the man in the street were able to hide a larger fraction of his personal wealth or income? Would the government shrug its collective shoulders and reduce its spending? Hardly. It would merely assume that each taxpayer is hiding a similar fraction of his income and increase all tax assessments accordingly. This would penalize honesty, and in fostering anger against the tax evaders would in all likelihood encourage the introduction of ever more draconian and authoritarian laws. And the tax revenues would keep flowing just the same.

Many secessionist apologists are misled by the existence of a small minority of people who operate on the black market or are otherwise able to shield much of their wealth from direct taxation; or by the fact that most people occasionally massage their tax returns a bit or pay tradesmen in cash for a small consideration.

However, these transactions relate to only a small fraction of the national product. The tax revenues "lost" are not large; indeed, the argument above implies that there is no overall loss of revenue. Governments know all about it—and don't care. It doesn't threaten them. Indeed, the existence of black marketeers, tax shelters and tax evasion provides them with handy scapegoats whenever they need—or desire—to increase taxes or impose tougher regulations.

All in all, to make economic secession work we should have to withdraw into autarky, foregoing the benefits of the division of labor. It is doubtful whether Thoreauesque self-sufficiency is any longer practicable in developed countries, for all but a minuscule fraction of the population.

Conceivably one could still flee to Siberia or the jungles of New Guinea; and there live free from any burden of tax, other than the burden of grinding poverty and social isolation from one's self-imposed exile. We will not take exception to those who make such a choice. As Aristotle notes: "He who would live without the polis must be either a beast or a god." In either case, criticism would be pointless.

If we are unprepared to take so drastic a step, we would do well to heed Mises's words, which echo John Donne's famous epigram that "No man is an island":

"Society lives and acts only in individuals; it is nothing more than a certain attitude on their part. Everyone carries a part of society on his shoulders; no one is relieved of his share of responsibility by others. And no one can find a safe way out for himself if society is sweeping towards destruction. Therefore everyone, in his own interests, must thrust himself vigorously into the intellectual battle. None can stand aside with unconcern; the interests of everyone hang on the result. Whether he chooses or not, every man is drawn into the great historical struggle, the decisive battle into which our epoch has plunged us."

Paul Birch (25 May 1956 – 4 July 2012) lives in Cowes on the Isle of Wight, England. He is a freelance scientist and writer who has published many papers on space colonisation. He is also interested in political philosophy.