The Duplicity of Ben Bernanke 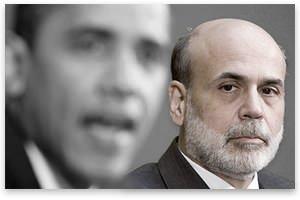 President Barack Obama nominated Ben Bernanke to a second term as chairman of the Federal Reserve System. Barring a rejection by the Senate, Mr. Bernanke will retain his title as the fourteenth Fed chairman on February 1, 2010.

Consider Mr. Bernanke's track record against his stated goals as Fed chairman. In opposition to his predecessor, Alan Greenspan, Bernanke said that he would communicate clearly and openly with the investment community. This, he said, would remove an element of uncertainty for investors.

However, it didn't take long for him to do an about-face on this issue. He learned that even the smallest utterance could shake markets. Today he embraces the jargon and ambiguities of his forerunner.

More troubling, Bernanke has overseen the most comprehensive lending facility ever undertaken by a central bank. During last year's crisis, the Treasury initiated the Troubled Asset Relief Program (TARP) with the approval of Congress. The $700 billion program was soon dwarfed by a further $788 billion in loans to the banking system made by the Fed, plus another $474 billion in lending directed mostly at the purchase of Fannie Mae and Freddie Mac bonds.

The additional lending operations in excess of the TARP have thus far been veiled in secrecy. Mr. Bernanke's calls for increased transparency have been completely forgotten. Some recipients of these funds, notably Citigroup and American International Group (AIG), have admitted to accepting the Fed loans. Others have been less forthcoming.

This pattern of concealment caused Bloomberg News to formally file a federal lawsuit seeking full disclosure of these activities on November 7 of last year. On the same day his nomination for reappointment was announced, Mr. Bernanke's Fed was ordered by a federal court to release the information regarding recipients of its lending operations in compliance with the Freedom of Information Act.

Barack Obama, whose presidential campaign focused on a more open and transparent government, seems untroubled by Mr. Bernanke's repeal of his own earlier plea for increased transparency.

opening remarks at the Federal Reserve Bank of Kansas City's Economic Symposium, held at Jackson Hole, Wyoming, focused on price-stability maintenance. His press release of August 25 thanking President Obama for his nomination reiterated his desire "to help provide a solid foundation for growth and prosperity in an environment of price stability."

And yet the consumer price index (CPI) at the end of last year was 5 percent higher than the year before. It was the first time in more than a decade that the American CPI had increased on this scale. At the same time as inflation was increasing, Mr. Bernanke justified keeping the federal-funds rate low, even though this policy increases inflationary pressures.

Nowhere was the conflict between Bernanke's previously sought-after goal of price stability reconciled with this newfound goal of financial-system stability.

If we look to see how Mr. Bernanke fared in keeping monetary inflation under wraps during the first three years of his term, we find dismal results. From January 2006 to July of 2009, the monetary base increased from $795 billion to $1.66 trillion. This amounts to an almost 110% increase in less than four years. Zimbabwean central-bank governor Gideon Gono might blush at such a number.

Concerning the mandate for "moderate medium-term interest rates," the Bernanke Fed used every tool at its disposal to keep interest rates ridiculously low. The result has been an effective federal-funds rate ranging from 0 to 0.25 percent since last December.

It is not the responsibility of the Federal Reserve — nor would it be appropriate — to protect lenders and investors from the consequences of their financial decisions.

However, after last year's turmoil, the Fed spent countless hundreds of billions ensuring that American financial companies remained liquid. Many companies were saved in the interest of securing "financial stability," but what about the case of Lehman Brothers? As Mr. Bernanke made clear, the collateral of the investment bank was far short of what was necessary to secure a Fed-brokered loan. At the same time, with 26,000 employees and $639 billion worth of assets, the company was not insignificant. The Fed decided to allow the company to go bankrupt. Yet as Frank Shostak reported at the time, "in a few days the market, once allowed to do the job, reallocated the good pieces of Lehman to various buyers and the bad parts have vanished. It was poetry."

Not only do the lending programs violate Bernanke's stated tenet not to allow the Fed to intervene to protect investors from losses, but the case of Lehman Brothers amply demonstrates that such a move is not even required.

The market took care of reallocating the resources in every case in which the Fed did not intervene.

Bernanke has spoken previously about how the liberalization of markets resulted in economic progress.

He has critically commented on "Regulation Q," a New Deal measure that gave the Fed the ability to install a deposit-rate ceiling for banks. As Bernanke astutely notes, the result of this rule was the curtailment of investable credit. He cites the repeal of this regulation in the mid-1980s as allowing for "fewer institutional 'frictions'" so that the market can act in a more textbook (i.e., orderly and efficient) manner.

However, one year after these comments, Bernanke renewed his calls for increased regulation.

His opening remarks from the 2008 Federal Reserve Bank of Kansas City's Economic Symposium focused on how the Fed, in its role as a financial regulator and supervisor, must lead the way in increasing market oversight, surveillance, and discipline. His calls for stifling the independence of the market came at the same time that he thanked President Obama for the continued independence of Federal Reserve activities.

Finally, Bernanke has pointed out that new technologies allow for more efficient and beneficial financial integration.

In his most famous speech as Fed Chairman, he gushed over one particular piece of technology at his disposal:

DVD only — no sleeve

The US government has a technology, called a printing press (or, today, its electronic equivalent), that allows it to produce as many US dollars as it wishes at essentially no cost.

Unfortunately, we cannot be sure if Mr. Bernanke realizes the difference that more conventional technologies — such as computers or telegraphic cables — imply for market efficiency compared to an increase in Federal Reserve notes, the latter produced at ever decreasing values.

Ben Bernanke has expressly acted in direct contradiction to every one of his stated goals as Federal Reserve Chairman. Most egregiously, he has overseen the most expansionist monetary regime in American history. His previous academic legacy had been as an ardent scholar of the Great Depression. Let's hope that his actions do not throw us into the midst of another one.

I would like to thank Jeff Tucker for excellent advice and comments while writing this article.