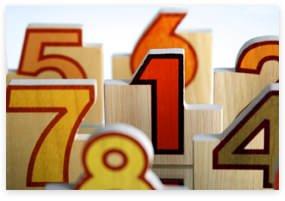 Food and energy prices are soaring. Inflation is squeezing consumers and roiling financial markets. Official pronouncements are failing to ease inflation fears. In the first seven months of this year we have already seen an inflation rate of 3.4 percent according to the consumer price index.

As always, government officials are attempting to underreport the inflation estimates. Although the CPI shows that inflation increased from a monthly rate of .2 percent in June to .3 percent in July, government officials have reported that inflation declined from June to July. They get this result by estimating a "core inflation rate." This core rate excludes product prices that are "volatile," and by volatile they mean rising faster than other prices. Excluding the most inflationary prices from the CPI estimates allows the feds to conceal the true harm of inflation.

Of course, at all times, some prices are rising faster than other prices. Prices don't rise in tandem. Inflation always affects some goods more than others. Omitting volatile prices from the estimates is simply a way to discount inflation's effects on the public.

The CPI is a government statistic, and since the government's expansionary monetary policy creates the inflation, officials have an incentive to underestimate these numbers. Underreporting inflation helps government officials in at least three ways.

First of all, it provides more favorable economic news. Elected officials want to report and take credit for any positive economic announcements.

And third, a lower reported inflation statistic reduces government spending by limiting the spending increases that are tied to inflation. The state can take credit for cost of living adjustments that are allegedly keeping up with inflation although in real terms the payments are falling.

My point is that given the incentives facing government officials, we should be reluctant to put any credence in government statistics.

In addition to underreporting inflation, the feds also want to conceal the cause of inflation. Federal Reserve policies pump up the money supply creating the inflation. In the last decade, M3 has increased 120% and this monetary stimulus is reflected in the official inflation statistics. Fed officials are quick to blame the inflation on supply disruptions or the higher demand for goods. Think about this. The Fed is essentially blaming inflation on rising prices. Inflation is the rise in prices. This is like the thief blaming his victim's loss of money on the victim's thinner wallet. The Fed points to the rising prices then claims that they must fight inflation. They position themselves as inflation hawks, although they are the cause of the problem.

Consumers are often suspicious of economic statistics, and rightly so, since they see the rising prices daily. Ludwig von Mises, in explaining the fallacies of price indices, noted that in "practical life nobody lets himself be fooled by index numbers." In order to convince the public that their statistics are accurate, government officials report the CPI to one or two decimal places. In spite of the imprecision of economic statistics, the Bureau of Labor Statistics is considering taking this a step further by reporting the CPI to three decimal places.

The rationale for this ridiculous proposal is that the feds want to provide more accurate inflation information. The idea that the government can accurately report inflation within one-one thousandth of a percent is absurd. However, reporting economic statistics to the Nth degree gives the illusion that government statistics are precise. Government officials hope that stunts like this convince the public to accept the officially approved statistics even if they have been manipulated to provide positive economic news.

How do the feds underreport inflation? The reported inflation rate is based on a price index, in this case the CPI, and every price index is based on the prices of a particular list of goods, called a basket of goods. The choice of goods to include in a price index basket is arbitrary and choosing a basket that includes goods whose prices are either rising slowly or falling and excludes the goods whose prices are rapidly increasing results in lower reported rates of inflation.

To understand how statisticians change the basket of goods in a price index, consider a simple economy that only produced two goods, cars and trucks. In the year 2000, they produced 100 cars and 300 trucks. The following year, car production increased 10 percent to 110 cars and truck production rose 5 percent to 315 trucks. Now suppose that car prices increased from $20 to $21 and truck prices rose from $10 to $12 in this time period (this is summarized in the table below). If we calculate GDP by adding the nominal spending on cars and trucks, then nominal GDP increased 21.8 percent in 2001 from $5000 to $6090. Obviously, nominal GDP does not accurately represent the growth in this economy. If one industry is growing at a rate of 10 percent and the other industry is growing at a 5 percent rate, overall economic growth cannot be 21.8 percent.

The reason for this discrepancy is that inflation has pumped up the nominal GDP numbers. The inconsistency between the growth of nominal GDP and actual economic growth is so obvious that the feds could never get away with reporting nominal GDP numbers as representing actual economic growth. Instead, they allegedly take the (government created) inflation out of the numbers by reporting real GDP estimates. The problem is that the real GDP calculations are based on suspicious price level statistics.

Suppose that the government of the economy described above wanted to report real GDP estimates. They would first need to choose a basket of goods to represent the price level. The basket could contain one car, one truck, or any combination of cars and trucks. A change in the basket generally changes the price index. Table 2 shows five possible baskets, the price index calculations for 2000 (assume that the base year for this price index is 2000) and 2001, the inflation rate for this time period, and the 2001 real GDP and the growth rate of real GDP for each potential price index. 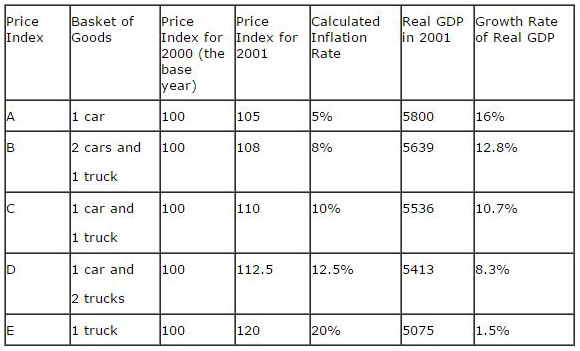 If the government officials choose a basket that is heavily weighted in favor of cars, say price index A then they can take credit for the positive economic statistics. If they omit trucks from the basket, because of their "volatile prices," they will use price index A and report an inflation rate of 5% and a 16% growth rate for real GDP. From A to E, the basket of goods becomes more heavily weighted with trinkets, the inflation rate rises, and the real economic growth rate declines. A basket that only includes trucks generates an inflation rate of 20% and a measly 1.5% rate of real economic growth.

The choice of basket items is arbitrary. There is no way to determine which basket accurately measures inflation. Since government officials get to pick the basket, it's safe to assume that they would choose a basket that furthers their interests.

It might favor the government to choose price index B. This index includes trucks but is weighted more heavily with cars. This allows the state to include both goods in the basket, to claim a relatively low inflation rate, 8 percent, and a high rate of economic growth, 12.8 percent. Then if the prices of trucks start to increase rapidly, the government could always report a core rate of inflation that doesn't include the truck prices. Simply drop trucks out of the basket and report the numbers generated by price index A.

On a larger scale, this is how our government operates. Expanding the money supply creates revenue for the state and falsely raises GDP. They are able to hide the resulting inflation by choosing the right basket for their price index.

If the chosen basket starts to indicate high inflation rates and the resulting low rates of real economic growth, government officials simply drop some of the items from the basket and report a lower rate of inflation. In this way some of the inflation is not removed from the nominal GDP numbers, making economic growth appear higher.

Every few years, the government revises the CPI, and for each revision the measured rate of inflation decreases. Government officials always tell us that the older CPI basket overestimates inflation. They admit that their estimates are off, but they never admit that they have been measuring inflation too low and adjust things upward. The new measure always allows them to report a lower inflation rate. Of course, it's impossible for officials to say price index A is a better measure of inflation than price index B. This assertion requires them to know the actual rate of inflation. If they know the actual rate, they should simply report it, not some estimate of the rate.

Government officials have the incentive and the ability to manipulate economic statistics. The lesson is: don't be fooled by government statistics.