Disintegration of the Fur Monopoly 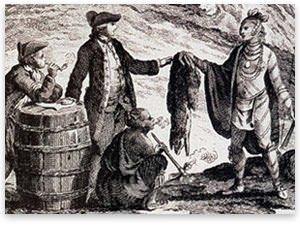 As happens on every new continent, the vast majority of Americans were engaged in transforming natural resources into use; in the case of New England, farming, fish, timber, and furs purchased from Indians located deep in the interior. Merchants and shippers largely exported this produce and in return imported other desired goods from abroad. It should be noted that, in contrast to the glib assumptions of many critics, there is no inherent "class conflict" between farmers and merchants in the market economy. There is no "agrarian interest" in a per se clash with a "commercial" or "mercantile" interest. Both groups play an intermeshing and complementary role in the processes of production and exchange. How, indeed, could "agrarians" find a market for their produce without merchants, and without farmers, in what goods would the merchants trade and to whom would they sell?

New England, indeed all of America north of the Potomac, had not the monoculture of the South (tobacco in the Chesapeake area and, later, rice in South Carolina), but a variety of products. The first products of New England were fish and furs, and the bulk of the earlier settlements began as fishing stations or fur trading posts. From the Indians, the whites soon learned two techniques indispensable to carving a living out of the new land: how to clear these unfamiliar woods, and how to grow that new product, Indian corn (maize), which soon became the North's leading agricultural product. Other important agricultural commodities in the North were wheat, rye, and barley.

To the first generation of devout Puritans migrating en masse to Massachusetts, intent on founding their "Bible Commonwealth," trade was more than slightly suspect. Trade was something to be watched, regulated, controlled — a standing distraction from "godly" concerns. There was little conception that the market has laws and workings of its own.

And yet, economic reality had, as always, to be dealt with — and even in the godliest of commonwealths there was often chicanery afoot. When the Puritans began to arrive in the late 1620s, the most highly developed enterprise in New England was the Plymouth fur trade with the Indians. But within a decade the Plymouth fur trade had virtually disappeared, and the economically declining Pilgrims had to content themselves with sending their agricultural produce to Boston to sell. How did this happen? How did Plymouth so swiftly become a sleepy backwater of Massachusetts Bay?

It is misleading to say that Massachusetts, with its influx of Puritans, was larger and wealthier. For this would not automatically have effected such a drastic revolution in fortunes. Moreover, Massachusetts supplanted Plymouth in the fur trade even though very few furs were native to the Massachusetts area.

The swiftness of this turnover is explicable only by contrasting the workings of governmental monopoly privilege with free private enterprise. In 1627 Plymouth owed £1,800 to its English financiers. Taking advantage of this opportunity, a group of eight leading rulers of the colony — as key members of the ruling oligarchy — in effect granted themselves a monopoly of the Plymouth fur trade in exchange for assuming the Plymouth debt. Also drawn into the monopoly scheme were four of the English merchant-creditors. The monopoly was to run for six years, but was annually renewed for several years afterward. Monopoly never spurs enterprise or initiative, and this was undoubtedly a major factor in the swift decline of the trade in the late 1630s, when competition from Massachusetts had to be faced. Plymouth could not, after all, deal with Massachusetts Bay as it had dealt with the competition of the highly efficient fur trader Thomas Morton, that is, by wiping out his settlement and deporting him back to England. Furthermore, the London creditors, while ingesting monopoly profits, fraudulently failed to reduce the Plymouth debt by that amount; the debt thus remained a heavy burden on the colony. So swiftly did the Plymouth fur trade collapse that virtually no one remained in it by 1640 and the monopoly was allowed to lapse.

It is true that the Massachusetts settlers helped this process along by such acts as seizing the Windsor trading post on the Connecticut River in 1635, but these were scarcely decisive. Instead, it was private, independent settlers, building trading posts in the interior — especially on the Connecticut River — building at their own risk and on their own initiative, who developed the New England fur trade. The most important fur trader was William Pynchon, who founded Springfield, the strategic northernmost settlement on the Connecticut River. Pynchon became a virtual manorial lord of Springfield, functioning as landed gentry and chief magistrate.

While the fur trade in Massachusetts and Connecticut was relatively free in contrast to Plymouth's, it was hardly a pure free enterprise. The governments regulated the prices of furs, taxed income from the trade, and moreover, insisted on licensing each entry into the trade. Indeed, entrance into the vital fur trade became a lucrative monopolistic privilege restricted to influential men with connections in the government of the colony. William Pynchon was granted the exclusive monopoly of the entire fur trade in the crucial Springfield region. As a result, he was able to expand greatly and establish branch trading posts of Springfield in the new settlements at Hadley and Westfield. In 1644 Massachusetts granted a 21-year fur monopoly to one company that included Boston importers William Tyng and Robert Sedgwick. The monopoly quickly went bankrupt, as did another attempt at a fur monopoly the following year.

In Rhode Island, meanwhile, Roger Williams was the first leading fur trader. One of the secrets of his success was that his social philosophy of peace and friendship with the Indians was complemented by concrete peaceful trading relations.

But New England, in the final analysis, was fur-poor, and by the late 1650s even the Massachusetts fur trade was beginning to decline rapidly. In New Haven it was a drive for scarce furs that lay at the root of New Haven's desperate attempts to colonize the Delaware Valley. As New England furs became scarcer, Indian trade concentrated deeper into the interior, and was increasingly centered around the Dutch post of Fort Orange at the current site of Albany. New England fur interests gave way to interests in land, agriculture, and other types of trade.

This article is excerpted from Conceived in Liberty (1975), chapter 30: "Economics Begins to Dissolve the Theocracy: Disintegration of the Fur Monopoly."