GET NEWS AND ARTICLES IN YOUR INBOXPrint
A
A
Home | Mises Library | Diminishing Marginal Utility: It's a Law

Diminishing Marginal Utility: It's a Law 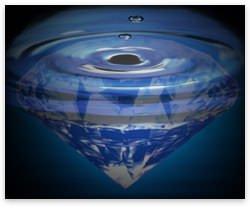 Tags Calculation and KnowledgeHistory of the Austrian School of EconomicsPraxeology

Why are diamonds, which are little more than decorative baubles, so much more valuable than water, without which we would die? The answer is that value is determined at the margin, meaning that we value not "diamonds" as a category compared to "water" as a category, but one more diamond compared to one more unit of water.

Water is super-abundant while diamonds are not; this is one reason why a diamond is so expensive while water is not. This also illustrates an important point about decision making. Instead of "setting priorities" and viewing things in terms of all-or-nothing decisions, we should look at trade-offs.

In his classic article "Toward a Reconstruction of Utility and Welfare Economics" and in his treatise Man, Economy, and State, Murray Rothbard asks us to consider eggs as an example. (I alter the example slightly here.) Consider Joe, who has a wife, a daughter, a dog, and the following value scale:

This line of reasoning neglects a crucial point: the fourth egg can only be used to bake a cake in the presence of the first three eggs. Since "marginal utility" is a concept that can only be applied to homogeneous units of a given supply, "one egg" is no longer the relevant unit of analysis. The homogeneity of units is determined by the set of wants that can be satisfied with a unit of a good; in this case, the relevant unit of analysis becomes "1 unit=a set of four eggs." Thus, Joe's value scale may now be

He will clearly choose to feed his family with cake and, should he happen upon a second set of four eggs, scrambled eggs as well.

The astute reader will notice that the value scales listed above were listed according to the wants satisfied by the marginal unit of a given good, not by the good itself after the fashion of Rothbard in "Toward A Reconstruction." Our hero Joe didn't prefer the first egg to the second in and of itself; he preferred feeding his daughter to feeding his wife. If only one egg is available, he must choose between competing ends, and the end that satisfies him most is feeding his daughter.

It should be evident that the law of marginal utility should be accorded just that epistemological status: a law. As Rothbard explains (and as Carl Menger and others showed before him), this theorem, which can be deduced from the action axiom, is more than merely empirically demonstrable: it is irrefutably true.

[1] Murray N. Rothbard, "Toward a Reconstruction of Utility and Welfare Economics."