GET NEWS AND ARTICLES IN YOUR INBOXPrint
A
A
Home | Mises Library | Did Hoover Really Slash Spending? 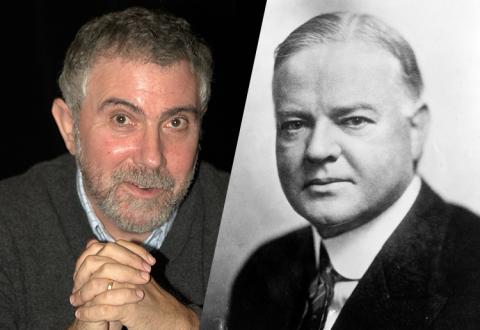 In a recent piece in the New York Review of Books, Paul Krugman and Robin Wells discuss two IMF publications and Reinhart and Rogoff's This Time Is Different: Eight Centuries of Financial Folly. Along the way, our reviewers repeat the myth that Herbert Hoover slashed spending, while the Federal Reserve implemented tight policies, and that this contributed to the severity of the Great Depression. I have pointed out repeatedly in prior articles that this simply isn't true, but since the Keynesians keep saying the falsehood, I feel compelled to keep pointing out that they're wrong.

To make sure I'm doing justice to Krugman and Wells, let's quote liberally from their book review:

History can offer some evidence on the extent to which Keynesian policies work as advertised. As we've noted, Reinhart-Rogoff don't address that question, but others have.…

There has been … suggestive work from the economic historians Barry Eichengreen of Berkeley and Kevin O'Rourke of Trinity College in Dublin, who have coauthored two hugely influential papers exploiting the similarities between the current slump and the Great Depression. In the first of these papers, they showed that from a global point of view the first year of this slump was every bit as bad as the Depression: world industrial production fell as steeply, world financial markets were if anything more disrupted, and so on. All this suggests that the shock to the system was just as big this time around.

In successive updates, however, they have shown current events increasingly diverging from the historical record, with the world experiencing a recovery that may be disappointing, but is far better than the continuing downward spiral between 1929 and 1933. The obvious difference is policy: rather than emulating the grim austerity of policymakers three generations ago, who slashed spending in an effort to balance budgets and raised interest rates in an effort to preserve the gold standard, today's leaders have been willing to run deficits and pump funds into the economy. The result, arguably, has been a much smaller disaster.

An even better test comes from comparing experiences during the 1930s. At the time, nobody was following Keynesian policies in any deliberate way — contrary to legend, the New Deal was deeply cautious about deficit spending until the coming of World War II. (emphasis added)

Now here Krugman has painted himself into a corner. Although elsewhere I have pointed out that Keynesians such as Christina Romer discuss the 1930s in misleading but technically truthful ways, in the above quotation Krugman (and Wells) are stating outright falsehoods.

In the United States, policymakers certainly didn't "slash spending" or "hike interest rates" in the immediate wake of the 1929 stock-market crash, and so the difference in our recoveries (two years into the two crises) can't be attributed to fiscal austerity versus prodigality. Moreover, under no sensible definition of the term — certainly not when juxtaposed with Krugman's wailing against the Bush years — can the New Deal be described as "deeply cautious about deficit spending."

Hoover and the Fed, After the 1929 Crash

According to the NBER, the so-called Great Recession started in December 2007. Although the timid NBER wonks have yet to date the official trough, most analysts (including Krugman) would say that the economy officially entered a recovery in the summer of 2009. Incidentally, I am not endorsing these conventional dating methods or definitions, but I'm just trying to show that Krugman's chronology — and consequent praise for Keynesian policies — doesn't fit the historical facts.

Follow me here, because this is an important point: In the long block quotation above, Krugman and Wells argue that the reason we went into a Great Depression in the 1930s, whereas we merely suffered a Great Recession in our own times, is that the fool politicians back then slashed government spending while the fool central bankers hiked interest rates. In contrast, our enlightened politicians (at least the Democratic ones) and Ben Bernanke had the wisdom to run massive budget deficits and to slash interest rates. That's why unemployment zoomed to 25% in the 1930s but has yet to break 10% in our time.

Now for this story to make any sense, it must be the case that Hoover "slashed spending," while the Fed hiked interest rates, within the first 20 months of the Great Depression. Do you see why? In our time — the so-called Great Recession — the slump began in December 2007, and was over (according to the conventional framework shared by Krugman) by August 2009. So when we're trying to see what Hoover and the early-1930s Fed did wrong, and why they didn't experience a painful but not catastrophic downturn such as the one we just went through, it had better be the case that their alleged mistakes occurred within the first 20 months after the stock market crash.

Recall that the great crash occurred in late October 1929. For fairness, call it November 1929. That means Hoover and the Fed must have implemented their boneheaded austerity measures — based on the special case of full employment in classical economic models, rather than Keynes's more general General Theory — sometime during the period before July 1931. 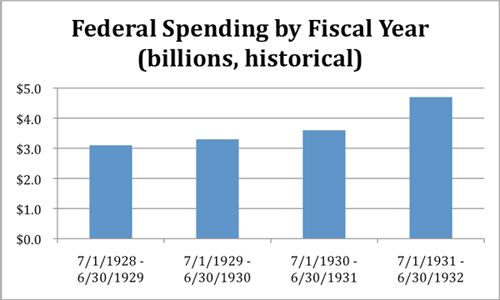 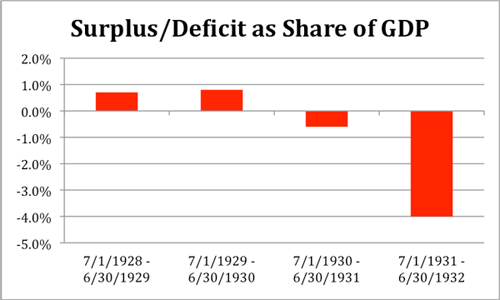 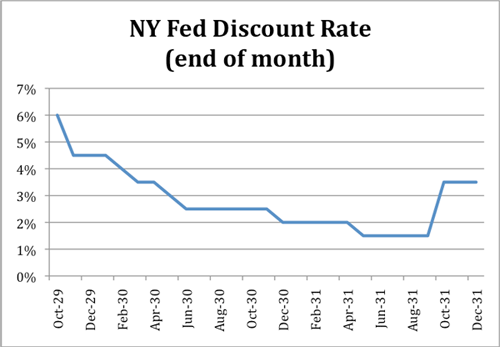 Let's see if we can spot the fiscal and monetary tightness, which allegedly turned a nasty financial crash into the worst depression the world has ever seen:

Some Comments on the Above Charts

Notice that federal spending went up throughout the period in question. It's true, in fiscal year (FY) 1933, Hoover had cut the federal budget by $63 million (1.3%) from the previous year. But fiscal year 1933 didn't start until July 1, 1932, which was two-and-a-half years into the Great Depression. Up until then, Hoover had steadily increased federal spending, just like Krugman would have recommended.

As far as deficits, the federal government actually continued the surpluses it had inherited from the Coolidge years through fiscal year 1930. However, the slight uptick in the surplus as a share of the economy (in FY 1930) is misleading; the actual surplus was about the same in both years (around $730 million), but the economy had shrunk from 1929 to 1930 and so the surplus was a bigger share.

In any event, by the summer after the stock-market crash Hoover's spending — combined with plunging tax receipts — had moved the Coolidge surpluses into Hoover deficits, and by the following year the deficit was 4% of GDP. For comparison, note that in his first term — when he "cut taxes on the rich and started a war" — George Bush's deficits were a maximum of 3.6% of GDP.

But I've saved my favorite for last. Look at what the New York Fed did with its discount rate. Immediately following the late October 1929 crash, the NY Fed began slashing rates. It kept periodically cutting until it got to 1.5%, which was the lowest rate in Fed history to that point.

Now it's true, in October 1931 the NY Fed abruptly changed course, because the Bank of England the month before had severed the pound's link to gold, and worldwide investors were fearful of a similar move by the US authorities. In order to stem the outflow of gold, the Federal Reserve did indeed find its hand forced and it had to jack up its rates.

But the point is that the Fed had implemented record "easy" policies from November 1929 through September 1931, some 22 months after the onset of the Great Depression. That is too long for Krugman's historical narrative to make any sense. As we explained in the beginning of this article, at best Krugman has a 20-month window to work with, since our present-day Keynesian and loose-money policies allegedly nipped the Depression in the bud in that timeframe.

To tie up one potential loose end that might trouble the fair-minded reader — is it possible that the Great Depression wasn't so bad in the early years, and only turned into the horrible slump after Hoover cut spending and the Fed raised rates?

Well, it's true that things continued getting worse after October 1931, but they had gotten pretty bad leading up to that point too. The monthly statistics of those days are a bit speculative, but the average annual unemployment rate for calendar year 1930 was 8.9%, while for 1931 it was 15.9%. That means it was very likely the case that unemployment had already broken our current levels by the end of 1930 (in order to make the average for the whole year 8.9%).

When we turn from unemployment figures to output statistics, the comparison isn't even close. From 1929 to 1930, real GNP fell 8.6%. Then from 1930 to 1931, it fell another 6.6%, for a total two-year drop of 14.7%. (In contrast, US real GNP was actually higher in 2008 than in 2007, according to the official figures, and it only dropped 2.7% from 2008 to 2009.) So it is clear that the awful Great Depression was in high gear even during the period of rising budget deficits and easy Fed policy; Krugman can't say that the real pain only set in after Hoover cut spending and the Fed raised rates.

Finally, let's deal with Krugman and Wells's claim that the New Dealers were "deeply cautious about deficit spending." Here is a table of the federal budget deficit, as a share of GDP, from the inauguration of Roosevelt till just before Pearl Harbor. And for kicks, I've included the eight years of the Reagan Administration side-by-side with it:

Now it's true, under any metric Reagan's budget deficits were bigger. Yet if we throw out the one year in which Roosevelt basically balanced the books, the two periods are pretty comparable. At the very least, if Roosevelt's prewar spending record illustrated "deep caution" about deficit spending, then Ronald Reagan's surely must have exhibited at least shallow caution. Yet somehow I think that if we combed Krugman's archives to find him describing Reagan as a deficit-phobe, we would search in vain.

Today's Keynesians love to point to history to "prove" the efficacy of their remedies. In particular, they adore Hoover's budget cuts of 1932, and the Fed's rate hikes of October 1931, as proof positive that ignorant conservatism caused the Great Depression. But prior to these turnarounds in policy, the federal government and central bank operated in a Keynesian fashion, though perhaps too timidly for Krugman's liking. Krugman's basic story doesn't make sense. If the Keynesians were right, the economy should have been in a tepid recovery by mid-1931, and yet it was in fact still freefalling.

In total contrast, in the depression of 1920–1921, the federal government and Federal Reserve really did implement the harsh measures that Krugman et al. erroneously attribute to Hoover and company. And yet, as its name suggests, this earlier depression was over quite quickly, and paved the way for the Roaring Twenties.

On their face, the Keynesian prescriptions make no sense. When an economy is on the ropes, the last thing in the world it needs is for politicians to squander more resources and for the central bank to print up more green pieces of paper. Yet even if we set aside economic logic and just "look at the facts," we see that the Keynesian narrative doesn't add up.