GET NEWS AND ARTICLES IN YOUR INBOXPrint
A
A
Home | Mises Library | Did Free Markets Cause the Flint, Michigan Water Disaster?

Did Free Markets Cause the Flint, Michigan Water Disaster? 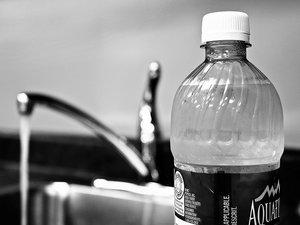 According to Brodwin, what caused lead-tainted water to gush forth from faucets in Flint were “attacks on investment in public infrastructure and on regulation of all kinds.” For these he blames “right-leaning libertarian interests,” although he does not name a single one.

America, writes Brodwin, has fallen under an “obsession with tax cuts [which] has reduced budgets to the point where they can no longer sustain basic infrastructure.” Attacks on regulation supposedly caused the failure of the Michigan Department of Environmental Quality to do its job. “Either its staff was buffaloed by those in power, or its professionals had been replaced by political hacks willing to ignore the mission of the agency.” Brodwin does not support these assertions with evidence.

But then comes a strange concession from Brodwin: “Local officials of the federal [Obama administration] Environmental Protection Agency failed as well.”

Brodwin’s conclusion is that “[i]f we don’t address the underlying ideologies that led to this problem, we’ll face it again and again, all over the United States.”

If you are wondering at what point in its history Flint, Michigan jumped onto the cutting edge of free-market thinking and practice, join the club.

Obviously Brodwin’s contradictory essay doesn’t begin to explain how small government caused lead-tainted water to pour out of Flint’s taps. From an economics perspective, what all the facts of the Flint case clearly point to is the all-too-typical failure of central planners to adequately think through the most important implications of a decision.

On 25 March 2013, Michigan state officials and the Flint city council (by a 7–1 vote) decided to switch the city’s water source from the Detroit Water and Sewerage Department (DWSD) to the new Karegnondi Water Authority (KWA), which would not begin operating until 2016.

In the meantime, an alternate source of water had to be found. The 26th of June 2013 was when the actual decision by the city (signed by the state-appointed emergency manager, Ed Kurtz) was made to hire an engineering firm to put Flint’s water plant into full-time operation, thus switching Flint’s water supply from Detroit to the Flint River. (The river was already Flint’s back-up water source.)

What city, county, and state officials all failed to do was take measures to ensure that the river’s corrosive water was sufficiently treated so that it did not absorb toxic lead from Flint’s water network.

Far from being unusually negligent for a government, this sad story is unfortunately understandable and predictable. Unlike the numerous suppliers of private bottled water, central planners have no competitive pressures to rigorously think through any and all of their decisions.

One civil servant in Spain, for example, just recently ended a stint of not showing up for work for six years. Successfully executing such a stunt in a private-sector job in a competitive industry is just about impossible.

Sebring, Ohio; Jackson, Mississippi; and the Trouble with Government Water

While most readers of this site will have undoubtedly heard a lot about the lead-tainted water in Flint, Michigan, the stories that comparatively few will have heard about are lead in the water in Sebring, Ohio and last Wednesday (February 24) in Jackson, Mississippi.

Again, what should come as no surprise is that the same type of government bungling that put lead in Flint’s waters is on full display in Sebring and Jackson as well.

On 17 February 2016, the Ohio Environmental Protection Agency fired two of its employees and demoted a third. The first employee who was terminated failed to verify that lab test results were received by a field office. In turn, this employee’s boss was terminated for not double checking the work of said subordinate who had a long record of incompetent job performance.

The third employee, the one demoted, was a manager who failed to notify his bosses that Sebring officials ignored warnings about their town’s lead-contaminated water.

None of the three individuals are being publicly identified. So much for state transparency.

In Jackson, Mississippi, of a hundred homes tested in January of 2016, almost a dozen had tap water with levels of lead that require correction. Fifty-eight of these homes had been tested in June of 2015 but the Mississippi State Department of Health did not (as required) notify Jackson officials that some homes had forbidden levels of lead in their tap water until January of 2016.

The Progressive Jihad Against Bottled Water

Progressives have placed a spotlight on Flint but not Sebring and Jackson because their ideology precludes them from acknowledging systemic problems with government and its central-planning process. Progressive economists such as Brodwin lay the blame at the feet of libertarian ideology. Worse than their delusions about the state, the ultimate dream of progressives is to outlaw just about all competition to government water.

They (including filmmaker Michael Moore) are apoplectic about Flint (and by extension Sebring and Jackson) residents consuming bottled water: it has to be transported in on “pollution-spewing” trucks and it creates waste and environmental damage in the form of empty plastic bottles.

When progressives succeeded at banning bottled water at the University of Vermont in 2013, the number of empty plastic bottles being discarded on campus actually increased as students, staff, and faculty members switched from consuming bottled water to less healthy bottled soft and other drinks. In other words, even in Bernie Sanders’s government-worshipping Vermont, consumers did everything they could to avoid government taps.

Before Lead, There Was Viagra and Anti-Psychotics

Years before the Flint, Sebring, and Jackson contaminations, an AP investigation in 2008 discovered everything from antibiotics, antidepressants, sex hormones, erectile-dysfunction drugs, to tranquilizers in the water supplies of twenty-four metropolitan areas with 41–46 million Americans exposed.

Consuming government water is a bad idea. At its very best, it has a repulsive over-chlorinated swimming-pool smell and even worse off-putting saturated chemical taste. At its worst it can be tainted with everything from trace or higher levels of Viagra or estrogen to dangerous levels of lead. Only a complete fool would regularly and solely consume it to the exclusion of its private alternatives.

One Hundred Years of Medical Fascism

The introduction of Obamacare was only the natural evolution of many decades of increasing state control of the...