The Democrats and their Doomed Ideology 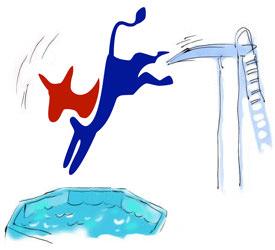 Those of us who loathe Republicans, especially Republican presidents, have some hope against hope that the Democrats will nominate a candidate who can save us from the certain doom of eternal Republican rule. Sadly, it seems that Bill Clinton, as much as we hated him at the time, was the last of a kind: a fairly normal and plausibly electable Democrat. In retrospect, he seems like the model of the moderate social democrat.

Hey, he signed off on welfare reform, a capital gain tax cut, and decentralized speed limit control. Also, he at least had the acumen to pull out of wars gone wrong (are there any other kind?). He cut government payrolls and reduced the deficit dramatically. Would that Republican presidents show such restraint!

(One reason that Democrats make better presidents: they actually believe in government, dummies that they are. And so they tend to want to make it work better and more efficiently on behalf of their voters, who are tightly connected to the public sector. The Republicans, in contrast, don't believe in government and so they are happy to steal everything in sight, wreck the budget, detonate the bombs, etc.)

Now, one might argue that a bad Democrat is better than any Republican, and I'm open to that idea. For one thing, a Democratic president inspires Republicans to be better than they would otherwise be. They suddenly remember, for example, that government is the problem and not the solution, that government spends and taxes and regulates too much, and they even cultivate skepticism about foreign intervention.

But just look at the crew the Dems have assembled for this year! What a mess of hucksters, victim-group politicos, and anti-capitalistic wackos. Maybe they would be tamed in office, but they sure are a scary crew otherwise. It can be depressing, to be sure, but let us remember that the root of the problem is not the individuals in question but the ideology that underlies the raison d'être of the modern Democratic Party, at least at the national level.

That ideology is socialism. I know what you are thinking: these guys aren't socialists, for it's been years since any prominent Democrat openly advocated the nationalization of all industry. So triumphant have free markets been that they don't even believe in this stuff anyway.

That's true enough but it sidesteps the reality that there is no economic activity that these people don't favor regulating to the nth degree. They talk of privacy and civil rights, but when it comes to commerce, they recognize no right of privacy and no individual rights. All property is up for grabs to control and meld in the name of national well-being.

That's the practice, but what about the underlying theory? Here too, socialism of the old sort is gone. But the socialist theory of society still burns brightly. Their model is that in the state of nature, meaning in a state of freedom, all is conflict and cruelty. Pathology and ugliness are everywhere. The government is necessary to step in at every level of society to resolve these otherwise intractable conflicts and manage our way into the new epoch of human well-being.

The old conflict view of society posited a perpetual clash between workers and management. That idea survives to some truncated extent in the Democrats' love of labor unions. But since unions constitute a tiny and dwindling sector within the labor market, and only thrive in the public sector, this idea takes a back seat to many other and crazier ideas.

You will recognize them. They believe that a deep and intractable rift separates the sexes such that one is always dominating the other, and so legislation and regulation is always needed to even the score and make up for past wrongs. The same is true of the races, and natives and immigrants, and the abled and disabled. None of these people can possibly work out their differences on their own. They need deep institutional change — even social revolution ushered in by elites — in order to bring about dramatic, Hegelian-style advances.

So it with man's general relationship with the environment. They posit an abiding conflict between the two, such that if one ascends, the other must descend. That is why all moves toward human prosperity are ultimately regretted as an attack on precious natural resources that should be left undisturbed. This is a Marxist idea: life under freedom is a prize fight in which everyone is throwing punches. All appearances of contentment are illusory. The job of the state is to decide winners and losers, while our job is to obey the authority and come to a consciousness that the expropriators must be expropriated.

Only this conflict model explains why these people can't imagine, for example, that business and consumers can have a cooperative relationship rather than an antagonistic one. So it is in every area of life. Even the most long-lasting institutions, such as the family, are seen as fundamentally pathological and exploitative. The same is true in international relations: they don't like Republican wars that much, but offer no model of internationalism that can replace the view that it is always and everywhere war by someone against someone, and so the only way to stop war is to wage one.

Such is the view of today's Left. They have never come to terms with the great insight of the old liberal revolution, which is that society is self managing over the long term. People can work out their problems. Human relationships are characterized most often as cooperative rather than antagonistic. People, not bureaucrats, know what is best for their own; and pursuing their self interest is compatible with, and even enhances, social well-being.

Such propositions are entirely rejected by most of the Democratic hopefuls. It's true too that Republicans have their own objections to the old liberal view, but we'll save these for another day. For now, suffice to say that party elites among the Democrats regard regular Americans as the problem and not the solution, so it is no surprise that they continue to have problems finding candidates for whom people are willing to vote. Think of it: They suppose all these awful things about the structure of the society in which we live and act, and then they ask us--the incompetent, pathological, unenlightened masses--to vote for them.

The heck of it is that the policies they promote end up bringing about conflict where none existed, and thus makes society reflect the very reality that they posit as their underlying theory. Their cure is the very disease that they sought to eradicate.

Let us remember that the core problem, in the end, is ideological and not personal. Uproot the underlying anti-liberal assumptions of the Democrats, make them Jeffersonian once again, and you would have a viable party. Until then, they will be hopelessly stuck in the mire at the national level, as depressing as that is to admit.