In Defense of Laziness 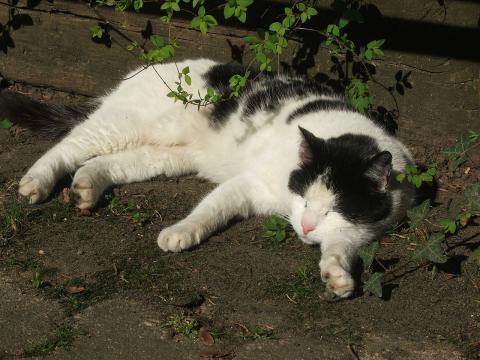 Tags Philosophy and MethodologyValue and Exchange

From the Puritans to the present day, people have looked with disdain on people who try to avoid work. One of the arguments presented in favor of the inheritance tax is that it prevents the descendants of a wealthy, hard-working businessman from just lying around and not contributing to "society."

American politicians constantly strive to prevent domestic jobs (i.e., work) from going overseas, or at least to immigrants. Everyone believes that hard work builds character. No matter what year it is, the present generation always has it easier than previous generations, who had to work much harder.

For all these arguments against laziness, it is amazing we work so hard to achieve it. Even those hard-working Puritans were willing to break their backs every day in exchange for an eternity of lying around on a cloud and playing the harp. Every industry is trying to do its part to give its customers more leisure time. If a business is successful and profitable, then it has successfully removed an obstacle standing between a large number of people and a life free of cares or work. The health-care industry is a good example of this.

Teams of brilliant scientists work very hard so people can stay out of the gym and eat chocolate instead of their vegetables. Indeed, their discoveries lead to longer retirements, and thus more sloth. From anodizing to zipper manufacturers, every business makes a profit by making life easier for some segment of the population. We just cannot admit to ourselves that we are working hard to become lazier, so we spin the language. We say that a new product will make processes more efficient or will create synergies.

If a company comes out with something that will "revolutionize" the way we do "X," it is really saying you can produce the same as you did before, but now we'll throw in some time for your leisure as well. The constant advance of civilization is just the greater production of free time, or least a shift in the limited time everyone has from work to leisure.

Mises described the state of affairs for men:

The expenditure of labor is deemed painful. Not to work is considered a state of affairs more satisfactory than working. Leisure is, other things being equal, preferred to travail. People work only when they value the return of labor higher than the decrease in satisfaction brought about by the curtailment of leisure. To work involves disutility. (Human Action, chapter 7, section 3)

We all would like to reach a state where we could be that rich kid living off Daddy's wealth for our entire lives. However, the whole reason we have economics is that civilization will probably never reach that state. Technology has a long way to go to maximize the incredible resources on earth or possibly out in space, thus our hard work must make up for this deficiency. Yet we are obsessed with moving in this direction. We all want to stop working.

This is why the socialist ideal is such a fallacy. The idea that there eventually will be a world where everyone will be excited about going to work and where production will increase due to the high motivation of the workers, is laughable. People constantly make decisions about whether they want to work for postponed leisure or take time off now. As civilization progresses, it becomes easier for individuals to choose the free time over the work. In Power and Market, Murray Rothbard talks about how the market's goal is to help people work less:

In the free market, in short, individuals are always balancing their money income (or real income in exchangeable goods) against their real income in the form of leisure activities. Both are basic components of the standard of living. The greater their exchangeable-goods income, in fact, the higher will be their marginal utility of a unit of leisure time (nonexchangeable goods), and the more proportionately will they "take" their income in the form of leisure. It is not surprising, therefore, that a coerced lower income may force individuals to work harder. Whichever the effect, the tax lowers the standard of living of the taxpayers, either depriving them of leisure or of exchangeable goods.

So if everyone wants to sit on a tropical beach with a cooler of beer every day, why do we become frustrated with government programs such as welfare, the minimum wage, or the mandatory forty-hour week? Wouldn't the recently enacted steel tariff help create more leisure for steel workers?

The reason we become upset with government-forced leisure programs is because someone always has to pick up the slack. Like Bastiat's broken-window fallacy, there are a few who increase their profits (leisure), such as steel workers, but others have to give up their "TV remote time" to make up for it. Resources that could be used more productively to allow people to sleep in are instead used to increase the leisure of a few, while decreasing the sleep time of many others. The government creates the fallacy that it can decree increased laziness without first creating a product or method that would allow those people to complete their work in a shorter period of time. In order for the government decree to be fulfilled, leisure must be taken from someone so it can be given to someone else. When the private sector increases laziness, they may do it for a small group such as a company's customers, but they do not take away playtime from others to make up for it.

Another reason government should stay away from our pursuit of leisure is that regulations and laws create additional unnecessary work. Not only do we have a huge bureaucracy administering the tax code, but we also have the entire private tax-preparation industry trying to find the best way to avoid provisions in the code. The government puts up artificial barriers that curtail time with your kids; you have to spend that time overcoming them. The hard work of public policy institutes could be diverted from defending freedom to enhancing our access to fun. It is one thing to overcome natural barriers, but what a pain to have some people create barriers only so others have to tear them down. That's twice as many people being taken away from amusement parks and ball games and put to work unnecessarily. When I was in the Air Force, a high-ranking officer explained it to me as a race between those with the digging contracts and those with the filling contracts.

In many Third World countries, there may appear to be an overabundance of laziness. What one has to remember is that there is a qualitative as well as a quantitative aspect to lethargy. Certainly, people do not have the quality of sedentary lifestyle we can enjoy in the United States. Our mattress, couch, and snack-food industries surpass every nation on earth. We do not have to worry (as much) about the government confiscating our furniture or food and increasing its NFL experience at our expense. So, members of those industries in the United States work harder to enhance our viewing pleasure, expecting that the rest of us will find a way to improve their free time.

This is not to say that all laziness and free time should be spent turning our muscles to fat and our brain cells to mush. Free time can be used to exercise, read the classics, learn a musical instrument, or do whatever you want. The general term "laziness" as I have used it encompasses every activity that is not done in exchange for the fruits of another person's work.

So let's hear it for laziness. It may seem paradoxical that we work so hard all year so we can sleep on the beach for a week in the Cayman Islands, but there is a method to our madness. As we work harder, leisure time for others increases in both quality and quantity, and we can assume that everyone else is returning the favor. Everyone else, that is, except the government.

The next time you hear about how our children are becoming fat and lazy, look on the bright side. Thanks to the hard work of those who have gone before, future generations can goof off more and more to their hearts' content.

Hal Cranmer is a commercial pilot in New Hampshire.