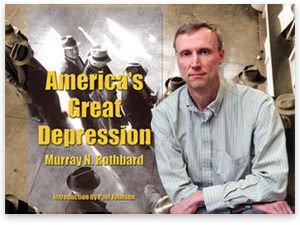 Scott Sumner is a Chicago-trained economist who has gained notoriety in recent months for his vigorous advocacy of "NGDP targeting" by the Federal Reserve and other central banks. I have criticized Sumner's views before, and he and I have agreed to a formal online debate to be held early next year.

In the present article, I want to respond to a recent post — titled "The myth at the heart of internet Austrianism" — in which Sumner criticized the Austrian explanation of the Great Depression. I will pick apart Sumner's post almost line by line, so I encourage readers to first follow the link and read it in its entirety before turning to my reply.

Sumner opens up his article, "This post is not about Austrian economics, a field I know relatively little about." Thus far, he and I are in perfect agreement.

[This article] is a response to the claim that the 1929 crash was caused by a preceding inflationary bubble. I will show that the 1920s were not inflationary, and hence that there was no bubble that could have caused an economic slump which began in late 1929.

1. Inflation as price change: Let's start with the obvious, the 1920s was a decade of deflation; prices fell. Indeed the 1927–29 expansion was the only deflationary expansion of the entire 20th century. That's right, believe it or not the price level actually declined during the boom at the end of the 1920s.

This is correct, if by "price" we mean the consumer price index (CPI). A basket of typical household goods did indeed become cheaper from 1927 through 1929. In fact, this was one of my arguments in my own book about the Depression, to show why the modern hysteria over "deflation" is nonsense.

The typical economist or financial pundit today will warn that if prices ever began actually falling, then it would set in motion a vicious downward spiral as consumers postponed spending, waiting for further price falls. Well, this deflationary black hole obviously wasn't occurring in the heyday of the Roaring Twenties, showing that falling prices per se don't wreck an economy.

Ironically, Mises and Hayek themselves pointed to the relatively stable (i.e., noninflationary) consumer prices of the late 1920s to show why their theory (i.e., the Austrian explanation) was better than Irving Fisher's approach.

Fisher famously thought the US Fed had been doing a smashing job during the late 1920s, because after all it had kept the purchasing power of the dollar relatively stable.

From the Austrian perspective, this apparent stability was an illusion, and was masking the actual distortions building in the economy. (Had the Fed not inflated the money supply, increases in productivity would have yielded much sharper drops in consumer prices during the second half of the decade.)

Having disposed of the first case — where "inflation" refers to rising consumer prices — Sumner then turns to the a different definition for the term, namely a rising stock of money:

2. Inflation as money creation: At this point commenters start claiming that inflation doesn't mean rising prices, it means a rising money supply. I think that is absurd, as that would mean we lack a term for rising prices. But let's assume it's true. The next question is; which money? If inflation means more money, then don't you have to say "base inflation," or "M2 inflation?" After all, these quantities often go in dramatically different directions. Since the internet Austrians seem to blame the Fed, let's assume they are talking about the sort of money created by the Fed, the monetary base. In January 1920 the base was $6.909 billion, and in December 1929 it was $6.978 billion. Thus it was basically flat, and this was during a period where the US population and GDP rose dramatically.

Now this is extremely misleading. In fairness, Sumner is tackling the claim of whether there was an inflationary boom in "the 1920s," and so he understandably looked at the start and end dates for the decade. Yet look at the actual chart of the monetary base during the period:

By picking January 1920 as his start date, Sumner was in the midst of the huge inflationary boom during World War I (when the Fed was partially monetizing the massive debt issued by the federal government). To curb the rampant consumer price inflation (exceeding 20 percent on a year-over-year basis), the Fed jacked up rates and crashed the monetary base, ushering in the depression of 1920–1921.

Then, as the chart above clearly indicates, the Fed slammed on the gas again in early 1922. After this set in motion another unsustainable boom and inevitable bust, the Fed once again stepped on the gas in the early 1930s in a vain effort to inflate to prosperity. (See my book on the Depression, or Murray Rothbard's classic, to see the massive government distortions that made the post-1929 depression qualitatively worse than earlier ones, and prevented the smooth transition into another boom.)

To be sure, the above chart by itself doesn't clinch the Austrian story. My point is that Sumner's analysis would have you believe that the monetary base was flat throughout the 1920s, when in fact it moved at least qualitatively in the way we would expect from an Austrian perspective.

However, if Sumner's handling of the monetary base during the 1920s was a bit misleading, his treatment of other monetary aggregates might cause one's head to explode:

The broader monetary aggregates rose significantly [during the 1920s], but the government didn't even keep data on M1 and M2 until fairly recently. No one in the 1920s thought the Fed should be targeting aggregates that didn't even exist.

Let's make sure we understand the metaphysical magnificence of Sumner's argument here. In the comments he elaborated,

I've shown there was no inflation as the term was defined at the time. I've shown that there was no alternative non-inflationary policy as understood by policymakers at the time, including those in the 1920s who claimed the Fed was too inflationary. It makes no sense to argue things were inflationary because M2 went up, if M2 didn't exist. There are no policy implications. M2 was an idea invented much later.

Thus, to dispose of the "internet Austrian" claim that a rapid increase in the money stock — such as M2 — could have fueled an unsustainable boom, Sumner points out that nobody at the Fed during the 1920s even knew what "M2" was, so the things that currently comprise this measure (checking account balances, short-term deposits, etc.) couldn't possibly be at fault. I wonder how Sumner explains the massive deaths during the bubonic plague? Did doctors even know what bacteria were back then?

Unfortunately, online databases such as the St. Louis Fed don't have monetary aggregate data (such as M1, M2, etc.) going back far enough to be able to quickly generate charts. But we have this explanation from an interview with Joe Salerno, regarding the inflationary 1920s:

Including [the surrender cash value in permanent] life-insurance policies, the increase in Rothbard's money aggregate between mid-1921 and the end of 1928 totaled about 61%, yielding an annual rate of monetary inflation of 6.5%, compounded annually. Leave them out, and we get 55% over the period, or 6.0% per annum. For comparison, in the highly inflationary 1970s, the money stock grew at an average annual rate of 6.35%, including the double-digit Carter years.

Turning back to Sumner, let's look at his consideration of gold:

This is cute, but of course hardly relevant since the United States was still on a gold standard at the time. Other asset prices did soar (as Sumner acknowledges). Regarding gold, however, we have this famous testimony in 1931 from A.C. Miller, whom Lionel Robbins called "the most experienced member of the Federal Reserve Board":

In the year 1927 … you will note the pronounced increase in [Federal Reserve] holdings [of US government securities] in the second half of the year. Coupled with the heavy purchases of acceptances it was the greatest and boldest operation ever undertaken by the Federal Reserve System, and, in my judgment, resulted in one of the most costly errors committed by it or any other banking system in the last 75 years!…

What was the object of Federal Reserve Policy in 1927? It was to bring down money rates, the call rate [the interest rate on loans to "margin buyers" who buy securities with borrowed capital — RPM] among them, because of the international importance the call rate had come to acquire. The purpose was to start an outflow of gold — to reverse the previous inflow of gold into this country.

The story is too long to recount here; the interested reader should consult my book. The short version is that following World War I, Great Britain tried to go back on the gold standard at the prewar parity, but this was an unrealistic goal given how much money they had printed during the war. The pound was hence overvalued, and gold was flowing out from the Bank of England and into the Federal Reserve. Thus, according to A.C. Miller and other evidence (such as statements by Benjamin Strong), the Fed deliberately eased its own stance in order to take pressure off of Great Britain.

Sumner will have to go back to the drawing board in his attempt to deny that there was any type of inflation during the 1920s. Using either the monetary base or broader aggregates, there was significant inflation after the 1920–1921 depression. Furthermore, we know that in 1927 the Fed deliberately adopted an "easy" policy with the aim of pushing down the very interest rate that governed stock speculation. The facts are entirely consistent with the Austrian explanation of the 1920s boom and crash.