GET NEWS AND ARTICLES IN YOUR INBOXPrint
A
A
Home | Mises Library | Is Debt Necessary for Recovery?

Is Debt Necessary for Recovery? 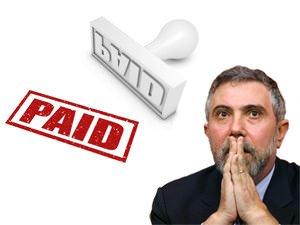 Tags Booms and BustsMoney and BankingOther Schools of Thought

Since the crisis began, one of the dominant themes in arguments over proper government policy has been the Keynesian view that it is crucial to prop up total spending. The added twist during this particular recession is the crushing burden of private-sector debt, which allegedly makes it all the more urgent for governments to run fiscal deficits.

In a previous article I dealt with so-called deleveraging and argued that it was a good thing, both for the indebted individual or firm, as well as the general economic recovery.

However, prompted by a recent scolding given by Paul Krugman, it's important to revisit the topic in a more elementary fashion. When Krugman, et al., casually claim that debt reduction would by sheer accounting cause total spending to fall, they are simply wrong. Thus their mistake is twofold: their faulty Keynesian economics leads them to worry needlessly about nominal spending, while their sloppy accounting leads them to champion debt as necessary for investment.

reacting to Cameron's statement, semi-withdrawn but not really, that what Britain needs is for everyone to pay down debt, said in obvious obliviousness to the fact that if everyone cuts spending at the same time, income must fall.

But then, this kind of obliviousness is very widespread, and my experience is that if you try to point out the problem — if you try to explain that my spending is your income and vice versa — you get a belligerent response. Y=E is seen as a political statement, which in a way it is if one side of the political spectrum insists on believing things that can't be true. (emphasis added)

As I mentioned in the opening, this claim has been repeated ad nauseam during the last three years. Specifically, the opponents of government deficit spending have been beaten over the head with the alleged "fact" that as a matter of simple accounting, widespread debt reduction implies a reduction in spending and hence a reduction in income.

The second part of the claim is true, as far it goes. Every time someone spends a dollar in a transaction it is, at the same time, part of someone else's income. In my previous article, I argued that this tautology does not make the Keynesian case for government deficit spending.

Yet Krugman's quotation above contains an even worse mistake. He is taking it for granted that if people in Britain began paying down their debts, then that necessarily would lead to a reduction in total British spending. He is simply wrong here, as I'll show in the next section.

Debts and Spending: A Simple Fable

Imagine a simple world with three people: Cathy the Capitalist, Larry the Landowner, and Willy the Worker. Initially we are in a stable pattern where every period, the following transactions occur:

In this scenario, every period $1,000 is spent on food, the only finished good or service. As officially measured — notice that it misses Larry's "home consumption" — gross domestic product (GDP) for this simple economy is $1,000 per period.

Now suppose that Willy listens to Dave Ramsey and decides to become debt free. In this particular period, the following might happen:

Now in this scenario, total spending is still $1,000, and measured GDP is still $1,000. Larry the Landowner wouldn't see a drop in demand for his food. Willy reduced his consumption and saved much more out of his income this period, but this didn't affect even nominal income because Cathy's consumption filled the gap.

Maybe our scenario isn't likely, depending on various assumptions we can make concerning Cathy's spending habits, but it is certainly possible. So we see that an economy can start out with one person having a large debt, then becoming debt free, without necessarily altering total spending or total income, even when measured in nominal (i.e., dollar) terms.

Let me be fair to Krugman. He might concede that the above scenario is what someone like Cameron (or Dave Ramsey for that matter) has in mind when calling for people to "pay down their debts," but if we're technical about it — so Krugman might argue — there really wasn't net aggregate debt reduction in the above scenario. Yes, Willy paid down his debt by $500, but Cathy in a sense "dissaved" by letting her own financial assets fall by $500. If we like, we can say Cathy's debt started out at -$500, and then ended at $0, meaning her debt "increased" by $500.

Okay, I am happy to give Krugman that escape hatch. As we'll see, it doesn't rescue him. I can still show how Willy can pay off his debt without causing total money expenditures to fall, and without anyone in the community even suffering a drop in financial assets.

To see this, revert to our original scenario, where Willy owes Cathy $500. As before, Willy decides to pay off his debt, through much higher saving. But this time, imagine the following occurs:

In this final scenario, consumption spending is $1,000 while net investment spending is $500, meaning official GDP is $1,500 — it has actually risen 50 percent! At the same time, Willy paid off his debt, while Cathy swapped a $500 bond for $500 in stock shares, so that (considering just these two) there has been a net reduction in indebtedness in the community.

But what about Larry? Has he simply replaced Willy as the new debtor in our economy?

No, he hasn't. Although Larry took in $500 while raising funds for his corporation, he is not indebted to Cathy, and so we can't say that his financial decision during the period somehow offset Willy's debt repayment. Cathy doesn't have a debt claim on Larry; instead she owns equity in his corporation. There is a whole literature in finance on the important differences between debt and equity, including the fact that debt financing makes a firm leveraged, whereas equity financing does not.

It's not even the case that Larry will have to reduce his future consumption in order to make dividend payments to Cathy (to justify the initial valuation of her stock at $500). So long as Larry's $500 investment is sound, the new field will increase future harvests, possibly allowing Larry to maintain his original consumption of food even though Cathy now has an ownership stake in the net profits of the business.

As our fanciful example illustrates, there is nothing in the raw GDP accounting that requires a period of deleveraging to yield smaller "total spending" and hence "total income," even if we measure those items in nominal money terms.

Of course, Krugman might object that I have loaded the deck, and chosen a completely irrelevant story. In our present real-world situation of depressed demand and excess capacity, Krugman might claim, why would Larry issue more stock and try to expand his operation?

Yet here we have left the realm of GDP accounting, and we enter the realm of economic models. That is why I said Krugman's post title — "Arithmetic Has a Well Known Keynesian Bias" — was so ironic. My fanciful example shows that the tautologous GDP accounting (or "arithmetic") is consistent with a story in which extra saving allows for more investment, which in turn provides an opportunity for underemployed workers to earn more income. (Notice that in the last scenario, Willy didn't reduce his food consumption. Instead, he paid off his debt by working more and earning a bigger paycheck for the whole period.)

Maybe the reader finds my story compelling, maybe not. But my point is, there is nothing wrong in the GDP accounting with my simplistic tale. The immediate objections to my story would rely on assumptions about how the economy works — assumptions that Keynesians typically make and that their critics typically reject.

The old-school, commonsense solution to an economy plagued by excessive debt is for people to work hard and save more. Keynesian economists have been saying throughout our current crisis that this folk wisdom overlooks basic accounting tautologies, but these pundits are smuggling in a Keynesian theory without realizing it.

Contrary to the assertions of these pundits, an economy does not need mountains of debt — whether government or private — in order to grow. Corporations can still raise needed financing through issuing equity. There are pros and cons to debt financing, but it isn't necessary for a strong economy.