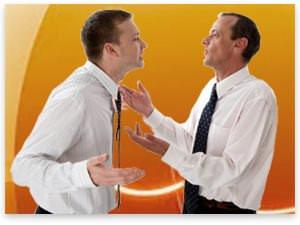 The mind engages in many activities which have power either for evil or good. Just what influence they will exert depends on how we use them. One of the most important of these activities is debate.

Debate brings in that unequaled form of incentive for all action which psychologists call "social pressure" and which here means nothing more than the desire to excel a fellow being in some line of endeavor. When debating we concentrate, and we do so without conscious effort. We are too interested in defeating our opponent to wander from the subject. We are forced to think rapidly. Not least of all, we are compelled to think articulately.

But with all its advantages, debate is one of the most potent sources of prejudice. In the heat of controversy, we adopt any and every argument that comes handy. Every statement of our opponent is considered only in the light of how it can be refuted. We are willing to use almost any objection against him, so long as we believe he will see no flaw in it. It is of utmost importance that we find how to avoid these pitfalls.

The first thing we must do is to adopt a complete change of attitude toward an opponent’s arguments. Whenever we meet with a fact which we would not like to cite in a debate — because, to put it mildly, it would not help our side — we should carefully investigate that fact. We should consider whether if true it changes the aspect of things. We should get rid of the idea that in order to vindicate our side we must answer every contention our opponent advances. For this opponent of ours will very likely be a man in full possession of his senses; at least some of his arguments will be rational. When they are, we should be willing to acknowledge it. Their truth does not necessarily make his side right. His arguments may be irrelevant; they may be outbalanced by some other reason or reasons.

Attempts to prove too much are liable to put us into the position of the lawyer whose client is alleged to have been sued for putting a hole in a borrowed umbrella. The lawyer proved first that his client did not borrow the umbrella; second, that there was a hole in it when he got it; third, that there was nothing the matter with it when he returned it.

"We should get rid of the idea that in order to vindicate our side we must answer every contention our opponent advances."

After you have had a friendly argument with an acquaintance, you take leave either with the satisfaction that you have bested him, or with a vague consciousness that though you were right, he was just a trifle more skillful at bringing forward arguments. But having this satisfaction or dissatisfaction, you seldom think any more of the matter until the next time you meet him. Now, this practice is helpful neither to your debating nor your thinking.

After you have taken leave of your acquaintance, and are left to the quietude of your own thoughts, you should mentally run over your controversy. You should dispassionately consider the bearing and weight of his arguments; and then, reviewing your own, ask yourself which were valid and relevant and which were not. If you find you have used a sophism you should resolve never to use it again, even though your opponent may have been unable to answer it. The question of morals aside, this is poor practice if you ever hope to become a thinker. In the end, it will tell against you even as a debater.

You can use your debates for constructive material as well as for criticism. After a controversy you can go over the arguments of your opponent which you could not refute, or refuted but lamely, and think of the answers you might have given. Of course you should take care that these answers are not sophistical. The question will very likely come up again; if not with the same friend, then with another, and when it does you will find yourself prepared.

But the best debater, or at least he who gets the most from debating, is the man who looks for evidence and thinks not for debate, but to obtain a correct conclusion. After he has reached a conclusion in this manner, he does not advance every possible reason to support it. He does not even utilize the reasons on which others base a similar belief, if he does not himself accept these reasons. He states merely that evidence and those reasons which have led him to accept his conclusion, nothing more.

While we are considering debate, I may well say a few words about conversation in general. We do not and cannot always argue with our friends, even though we scorn the dictums of formal etiquette. But because we do not argue, it does not follow that we gain nothing. In fact, ordinary conversation has advantages numerous over debate, not the least of which is the comparative freedom it gives from prejudice.

But the value of conversation depends both on what we talk about and whom we talk with. Too much of our talk is on petty matters, is uneducative. And even if we converse on worthy topics, it will profit us little if we do not talk with worthy people. When we commune with a dull mind, our thoughts are forced, in some degree, down to the level of that mind. But dull people do not usually talk of weighty matters, nor do active intellects dwell long on trifles. Therefore if we rightly choose our companion we can conscientiously leave our path of conversation to choose itself.

One aspect of conversation remains to be treated — its corrective power. "There is a sort of mental exposure in talking to a companion; we drag our thoughts out of their hiding-places, naked as it were, and occasionally we are not a little startled at the exhibition. Unexpressed ideas are often carefully cherished until, placed before other eyes as well as our own, we see them as they really are."1

This article is excerpted from Thinking as a Science, chapter 6, "Debate and Conversation" (1916; republished by the Mises Institute in 2008).