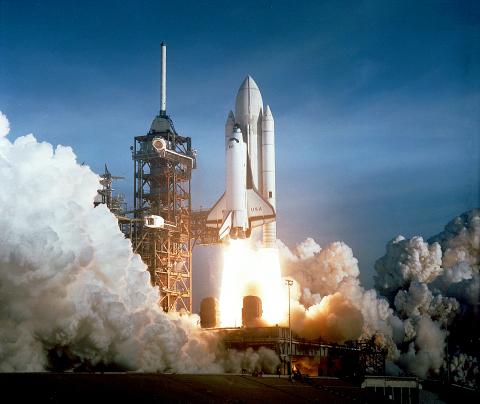 Like those who were of age the day John F. Kennedy was assassinated, most people can remember intimate details of what they were doing when they first heard that the space shuttle Challenger had exploded. To compound the tragedy, millions of schoolchildren across the country watched the whole thing in shocked amazement.

The "teacher in space" program that NASA hoped would be a public relations boon to the shuttle program exploded with the shuttle as teacher Christa McCauliffe of New Hampshire was among the seven astronauts who perished when the shuttle disintegrated miles above the earth. While NASA went on to record many more space flights after the Challenger disaster, the program once again was shocked into reality when Columbia blew up in flames just minutes before landing, killing all seven astronauts aboard.

In writing about the latest NASA disaster in the Free Market, I pointed out the problems and depressing realities about socialist space travel. What I did not say was something that is even more depressing: the roots of both disasters were planted in the government's environmental policies. Environmentalism not only killed 14 U.S. astronauts, but it killed them in a most horrible and public way.

As recent news reports have pointed out, the wreck of the Columbia was almost certainly due to a chunk of insulating foam coming loose and hitting some heat-protecting tiles, scattering them and leaving the spacecraft vulnerable to the intense heat it would experience upon re-entry into the earth's atmosphere.

That is all that the mainstream news—and NASA—have been willing to report. What they have not said is that the particular foam that was in use at the time was an environmental substitute replacing a material that had worked well. However, the previous foam used to insulate the Columbia's external fuel tanks contained Freon, which is a chlorofluorocarbon (CFC) that the EPA banned because of the ozone depletion scare.

As Steven Milloy reports, NASA could have sought an exemption. Freon, after all, is inert and nontoxic, and its connection to ozone depletion is tenuous at best. However, having been burned by the EPA once before (as I will point out), NASA succumbed to what Milloy calls "PC foam."  He writes, "PC foam was an immediate problem. The first mission with PC foam resulted in 11 times more damaged thermal tiles on Columbia than the previous mission with Freon-based foam."i

Furthermore, the damage was obvious—and quite severe. Milloy writes that following the 1997 Columbia mission, "more than 100 tiles were damaged beyond repair, well over the normal count of 40."

I now examine the Challenger explosion, which occurred the week after the Super Bowl in January 1986. As nearly everyone familiar with the catastrophe knows, a set of O-rings that was supposed to keep hot gases trapped in the rocket carrying the shuttle failed, the fuel quickly leaking out and igniting into a fireball shortly after takeoff.

It was an unusually cold morning at Cape Canaveral, too cold for the O-rings to perform properly. That is well-known. What most people do not know is that the material used to make the O-rings was a substitute to replace a product that the Environmental Protection Agency had banned because it contained asbestos.

The original O-rings used between the rocket joints came from an over-the-counter putty that had been used safely and effectively for a long time. However, in its war against the use of asbestos anywhere, anytime, the EPA forbade NASA from using that product at all after the space agency had sought an exemption. The EPA, not surprisingly, refused that request, something that would ultimately lead to the next disaster 17 years later. The new product, not surprisingly, failed and we know the rest of the story.

In normal situations, this would be a scandal of epic proportions. A government agency requires the use of unsafe materials that lead to the very public deaths of 14 individuals. Had a private firm permitted these kinds of unsafe working conditions, the situation would be worthy of a New York Times investigative report. Instead, all we hear is silence, interspersed with "the show must go on" comments about the future of the space shuttle program. Even the news reports on the foam disaster have ignored the reason why NASA used such an unsafe product; in fact, mainstream reporters are not even asking the pertinent questions.

Countless writers on these pages and elsewhere have pointed out the high costs—and low benefits—of environmental laws and regulations. Environmentalism has become a sacrosanct religion of which no questions can even be asked.

Yet, we see once again that applied environmentalism can be disastrous. Granted, we are talking about the lives of "only" 14 people, compared to the hundreds of thousands that have died of malaria following the banning of DDT, which once effectively killed the mosquitoes that carry the disease.