GET NEWS AND ARTICLES IN YOUR INBOXPrint
A
A
Home | Mises Library | David Frum, Neoconservative New Dealer 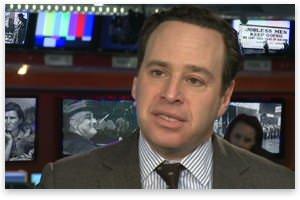 03/29/2010Robert P. Murphy
In the wake of Ron Paul's straw-poll victory at the CPAC convention, neoconservative author David Frum told CNN's readers that a return to the gold standard was both undesirable and impossible.

After downplaying the significance of Ron Paul's win at CPAC, Frum concedes that many Americans have taken to Paul's message of tying the dollar back to gold. Frum thinks that such a quaint view ignores American history. He writes,

G.K. Chesterton observed that you should never pull down a fence until you understand why it was put up.

So let's rediscover why it was that Americans abandoned the gold standard in the first place.

In the first place, it's a bit ironic to use a quip from G.K. Chesterton — the epitome of a wise conservative in the true sense of the word — to support the New Deal's uprooting of the gold standard, which Frum himself acknowledges was considered a bulwark of Western civilization.

In any event, it's very odd to say that "Americans abandoned the gold standard." Let's recall the actual events: Gold was originally the voluntary, market-chosen money (along with silver). Americans were willing to hold paper notes denominated as "dollars" only because they were originally legal claims entitling the bearer to a specified weight of gold (or silver).

Then, in 1933 the newly sworn in President Roosevelt voided Uncle Sam's contractual obligations. He further required that all Americans turn in their gold under threat of imprisonment and a $10,000 fine. It was not even legal for Americans to tie clauses of contracts to the world price of gold, until the 1970s.

It wasn't even the case that FDR campaigned on a pledge to end the dollar's tie to gold. Indeed, one of Herbert Hoover's bitter complaints was that FDR caused unnecessary chaos in the financial markets after his election in November 1932 by not explaining what his gold policy would be during Hoover's lame duck session. (In those days new presidents were not sworn in until March 4.)

There are many ways of describing the above history, but "Americans abandoned the gold standard" would not be high on my personal list. By the same token, if a Texan were complaining about outrageous federal taxes, I wouldn't say, "Hey, you should recall why America retained the Confederacy."

Let's explore Frum's explanation of why "America" abandoned the gold standard in the early 1930s:

In 1929, the U.S. economy slumped into recession. Under the weight of a series of terrible decisions, that recession collapsed into the worldwide Great Depression.

But why did decision-makers make so many bad decisions? The short answer is that they were trapped. Almost all of the right decisions would have ballooned the U.S. federal budget deficit. As budget deficits expanded, investors would inevitably worry that their dollars might lose value in the future. They would demand to trade their dollars for gold at the fixed price of $20.67 to the ounce. Under the rules of the gold standard, the U.S. government would be obliged to sell.

As long as the deficits continued, the U.S. government would lose gold. Threatened with the exhaustion of its gold supply, the government felt it had no choice: It had to close the budget deficit. So, in the throes of a severe downturn, the U.S. government did exactly the opposite of what economists would otherwise advise: It cut spending and raised taxes — capsizing the economy even deeper into depression.

It's very strange to hear gold standard advocates criticize President Hoover for imposing steep tax increases in 1932, the Depression's worst year. Yet the gold standard they champion was the reason for the tax increases they deplore. (emphasis added)

I don't need to dwell on the bad economics behind Frum's assertions. David Friedman has already done a fabulous job, and I would merely be repeating the same things I wrote just one week ago when correcting Paul Krugman's faulty ghost stories of Herbert Hoover.

For the present piece, I just want to make an observation: isn't it ironic that David Frum, former speechwriter for George W. Bush and a fellow at the American Enterprise Institute, thinks that it is common knowledge that deficit spending is the way to fix a depressed economy?1 To his credit, Frum is consistent: he actually criticized conservative Republicans for opposing Obama's stimulus package.

In my younger days, when I was even more naïve than I am now, I couldn't understand how "right-wingers" could be so good on domestic issues like taxes and business regulations, but so awful on foreign-policy issues. I couldn't understand how self-described conservatives could detest and fear big government when it came to the Department of Health and Human Services, but not when it came to the CIA and the Pentagon.

Now I realize that there's no hypocrisy or inconsistency at all, at least not among some of the top neoconservative theorists: They are quite consistent in believing that politicians in Washington, DC, have both the ability and the desire to make the world a better place, whether in foreign lands or in American inner cities. All it takes is several trillion dollars and a few experts like David Frum advising them.

Is the Gold Standard Impossible?

After painting a picture of how awful a modern gold standard would be — it would have made the recent trillion-dollar-plus deficits impossible, yikes! — Frum argues that the entire discussion is moot:

No government ever can return to the gold standard.

Back in the 1930s, governments accepted horrific suffering because they were terrified of the consequences of going off gold. When President Franklin Roosevelt told his budget director, Lewis Douglas, of his decision to quit gold, Douglas replied: "This is the end of Western civilization." He wasn't kidding either.

In fact, the decision was the turning point of the Depression, the beginning of recovery. And every monetary economist knows it. Which means that the first thing any future gold-standard government would do in the event of recession would be to jettison gold. And every market trader knows that too.

So … as soon as the first sign of recession materializes on the horizon, the traders would dump the currency of the gold standard country. The gold standard country would then have to decide whether to self-impose draconian 1932-style budget-balancing or forgo the whole painful experience and surrender right away to what is inevitable sooner or later.

Since everybody knows that a gold standard country would quit gold as soon as times got tough, nobody will ever believe the decision to restore the gold standard in the first place.

It's as dead as monocles and walking sticks. Deader, really.

I have dealt with the history of governments breaking their ties to gold here. What I want to do now is show how Frum's closing argument contradicts the writings of G.K. Chesterton, underscoring the irony I alluded to earlier. To reiterate, Frum is claiming that history has moved on and the gold standard is now obsolete. I couldn't find a quote from Chesterton on the gold standard per se, but I did find this:

One of the first things that are wrong is this: the deep and silent modern assumption that past things have become impossible. There is one metaphor of which the moderns are very fond; they are always saying, "You can't put the clock back." The simple and obvious answer is "You can." A clock, being a piece of human construction, can be restored by the human finger to any figure or hour. In the same way society, being a piece of human construction, can be reconstructed upon any plan that has ever existed. (G.K. Chesterton, What's Wrong with the World

It's difficult to pinpoint the precise error in Frum's reasoning, since it is a string of assertions. Under Murray Rothbard's plan for a return to a genuine gold dollar, paper notes would be backed 100% by gold reserves. So even if investors around the world doubted the commitment of, say, a newly elected President Paul to honor the US government's gold obligations, this would pose no problem. Governments get into trouble when they print more paper money than they can redeem, leaving themselves vulnerable to a "bank run" by speculators. Under a 100% reserve gold standard, it's true that the federal government's ability to run deficits would be curtailed, but that's one of the advantages of the proposal.

Although he writes with confidence, David Frum's rejection of the gold standard is based on faulty history, bad economics, and a belief in the power of Washington to manage the economy. On top of it all, Frum ends with a non sequitur akin to my declaration that a diet can't reduce my waistline, since I would just go off it in two weeks.